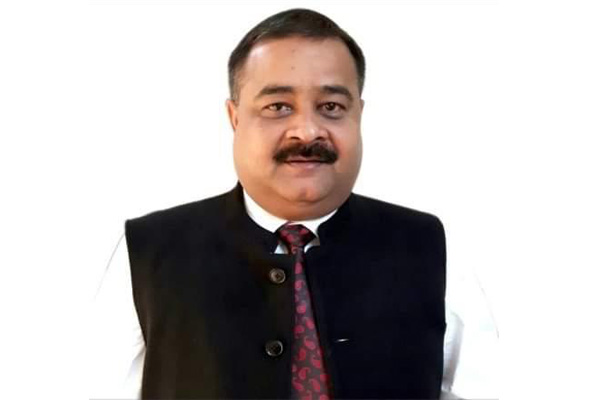 As many countries worldwide are fighting with the novel Coronavirus that has as of now has taken several thousands of deaths across the globe, Agra is taking proactive steps to protect the city and citizens as much as possible. There are various initiatives taken by the Agra Municipal Corporation (AMC) in collaboration with the Agra Smart City to prevent the further spread of the viral disease, says Arun Prakash, Commissioner, AMC and CEO Agra Smart City in a live webinar hosted by Dr Ravi Gupta, Founder and CEO, Elets Technomedia.

Prakash, while addressing the webinar,  informed that the civic body has developed ‘Smart Health Centre’ under the Smart City Mission that helps in spreading awareness about various Do’s & Don’ts amidst Coronavirus situation. The move involves a briefing of 3-5 mins regarding the Coronavirus which is being given to every patient that reaches out to the health centre for the general consultation or for a specific checkup. The initiative is being carried up in dental clinics as well. According to Prakash, as many as 325 patients took the consultation in the month of March and 675 patients in February. Around 1,015 sanitizers and 935 masks were distributed at subsidized rates through the pharmacy at the centre which provided a great relief to the people.

Online Information Portal for Grocery at your Doorstep

Talking about the essential supplies like groceries, Prakash said, Agra District Administration and Agra Smart City joined hands to ensure doorstep delivery of the groceries by developing an Online Information Portal for the citizens. The portal will be operated from the Integrated Command Control Centre (ICCC). The authorities launched weblink for the citizens to access the portal – http://agrasmartcity.in/EssentialItemSupplier.aspx

People can get all the relevant information regarding door-to-door suppliers list for groceries, fruits & vegetables on the web link provided by entering their respective ward numbers, he added.

To implement the initiative, the authorities surveyed the entire city and identified specific kirana shops and fruit/vegetable vendors in each ward to get the doorstep delivery initiative going. The authorities took mobile numbers of the identified vendors and transmitted the same to households. The addresses were already collected during the GIS property survey and SWM RFID tag installation, said Prakash. The move has now made it convenient for the people as they need to text the vendors regarding their needs which the vendor would be delivering within 24 hours to their doorstep. Also, the authorities tried and fixed prices for various essential items. Further, a tie-up has also been done with Zomato and Big Bazaar to deliver grocery at the doorstep. The civic body identified 10 vendors per ward to execute the strategy, he added.

A COVID-19 war room is set up to answer and guide citizens for doorstep delivery and to remove the panic among citizens for non-availability of essential items.

Arun Prakash said that the civic administration and the smart city developed the portal to enable citizens to connect with the local vendors and get the supplies delivered at home. People can search for the groceries and fruits and vegetable sellers who are doing doorstep delivery along with their mobile numbers in their respective municipal wards and can contact them and place their order. The activation of the portal also helped in reducing the stress on the helpline number.

Prakash informs that the use of technology for making things convenient for people has also helped in ensuring a successful lockdown. Moreover, the authorities are helping spread general awareness about the COVID-19 situation including the Do’s and Don’ts on the portal and through the Public Awareness (PA) systems. The PAs have been installed in 27 major junctions where advisory is announced 24×7 and monitored through the ICCC. In addition, 100 hoardings have been set up in various unipoles spreading awareness about various the Do’s and Don’ts.

Prakash further said that the authorities are continuously keeping an eye on the citizens to ensure the lockdown norms are being followed. With the help of ICCC spots were identified where people are aggregating and where crowding was observed, and inputs were provided to the police department to take appropriate action. Further, he said, e-challans were also issued to people violating the lockdown norms and bringing vehicles on roads for non-essential reasons.

Detailing on more initiatives by the city administration, Praksh said a ‘Cooked food bank’ has been constituted which collects cooked food packets from various NGOs and distribute the same to the people in need. Through the initiative, the bank has distributed around 5000 packets.

Considering the importance of hygiene and sanitation amidst the Coronavirus outbreak, the authorities are conducting fogging and sanitation of all prominent places regularly and thoroughly monitoring the process, said Prakash.

Describing the grim situation, Praksh said that while the number of COVID-19 cases is lower than global numbers, shortage of testing facilities combined with high-density living makes the potential risk higher. Few infected cases have been detected in Agra as well, Prakash added.

Agra District has launched the Citizen COVID-19 Self Registry Platform for the citizens to assess their health risk, and create PIN code based early risk assessment matrix for authorities, Prakash adeed. The app is based on  SmartFeedback SaaS platform which is powered by Microsoft Azure.

The newly developed application allows citizens to self-select their symptoms, travel and contact history, assesses their risk level and gives them fundamental instructions. It’s been kept simple and interactive to enable ease of use, said Prakash. Emphasising on the resourcefulness of such an app Prakash said, data comes to Azure cloud, and inbuilt analytics and reports will enable authorities to see the daily picture of High, Medium, Low, or No Risk self-assessments, as well as, trends over time to see early patterns if certain localities start emerging as hotspots.

Keeping up with the privacy, if a citizen registers a high-risk self-assessment, appropriate medical teams can reach out to the individual. This app, combined with multiple other efforts that the authorities have taken, should impact the safety of citizens, he added.

Agra authorities have developed a Lockdown Monitor app to keep a check on the movement of people throughout the city, said Prakash. The app is developed with the help of Secura, official vendor of the surveillance system for the authorities, under its CSR initiative. Elaborating about the application Prakash said, the app detects groups, crowd, and close proximity of people. Identifying any of which an alert is instantly generated to help the authorities to strictly maintain social distancing in the city. The app alerts Police personnel on the ground to take necessary action immediately. Hence, this initiative of crowd analytics is an apt solution so that the lockdown may achieve effectively.