Set amongst thick greenery on the Ayeyarwady river basin with misty mountains at a distance, Bagan will surely enchant you with its mystical appearance. The temples rise above the canopy of trees, presenting a picture-perfect scenery to visitors.

Located in Central Myanmar, only four hours away from Mandalay, Bagan is one of the world’s greatest archaeological sites. Chronicles tell that Bagan was founded in 2nd Century AD and fortified in 849 AD by King Pyinbya, a successor of the founder of Bagan. It was the first capital of the Pagan Kingdom between the 9th to 13th centuries. More than 10,000 Buddhist temples, pagodas and monasteries were constructed during the most flourishing days of the Kingdom between the 11th to 13th centuries. Today, around 2,200 temples and pagodas still survive and are carefully looked after by the government.

The temples are a part of Bagan Archaeological Zone. They contain carvings, frescos and statues of Buddha, which are certainly mesmerising and fun to explore. Out of the 2,200 sites, only a few are regularly visited. Being the country’s foremost tourist destination, Bagan has innumerable licensed tourist transport services to help tourists enjoy this beautiful site.

Apart from the temples, visitors can also enjoy a leisure trip on the Ayeyarwady River, Myanmar’s lifeline. Take a cruise from Mandalay to Bagan and enjoy the riparian vegetation, the soothing river breeze and not to mention the sights and sounds of life along the river. You will also be able to indulge in the fascinating views of Mt. Sagaing, Pakokku, Myingyan and other sites along the way.

Ancient chronicles say that there were once 4,446 pagodas and stupas covering Bagan’s wide plains but today around 2,230 splendid examples remain, as recorded by UNESCO in 1988. Largely built from the 10th to the 14th century, they are found in the Bagan Archaeological Zone, which is defined as an area measuring 104 sq km (40 sq miles) located in the vast expanse of plains in Upper Myanmar on the bend of the mighty Ayeyarwady River.

Traditional horse and cart is a popular and enjoyable way of seeing Bagan but visitors can also hire bicycles, e-bikes and taxis to get about.

Constructed in 1091 by King Kyansittha, the structure of Ananda Temple is very artistic and the ground plan is like a perfect Greek cross with pavilions on all four sides. Likely one of the most famous pagodas in Bagan, it is 51m high in total while the entire compound measures 180m from north to south and 182m from east to west. In the centre of the temple are high niches enshrining four colossal standing Buddhas on a throne, each of them nearly 10m tall.

Noted for being one of the earliest monuments on the plains of Bagan, the original pagoda was built in Pyu style, a descendant from the Indian style stupa. Legend has it that Bupaya (Bu meaning “gourd” and relating to the gilded pagoda’s shape) was built by King Pyusawhti who rid the river of this weed and that it dated back to the 3rd century. However, historians place it closer to the 9th or the 11th century (respectively when Bagan city was founded or the city walls were built).

The largest temple structure in Bagan, Dhammayangyi Temple is a cave pagoda and was built between 1167 and 1170 by King Narathu. It has an intriguing past as the legacy of one of the most bloodthirsty kings in Burmese history. Viewed from a distance, its structure resembles an Egyptian pyramid. The temple is about 1km to the Southeast of the city walls. Although never completed most of the arches and the major portion of the structure are still intact. Very close to the road between Nyaung U and Bagan, Htilominlo Pagoda is about 1.5km northeast of Bagan. This large temple was built by King Nantaungmya in 1218. The temple is well known to be the last Myanmar style of temple built in Bagan. The name is a misreading of the Pali word for ‘Blessings of the Three Worlds’. King Nantaungmya erected the temple on this spot because it was here that he was chosen, among five brothers, to be the crown prince.

Built in 1059 by King Anawrahta during his reign, Lawkananda Pagoda has the Buddha’s tooth relic enshrined. The pagoda was erected on the bank of the Ayeyarwady River. During those days, with the power of Bagan Dynasty, the Mon region, Rakhine and even as far as Sri Lanka would anchor by the Ayeyarwaddy riverside. With its distinctive elongated cylindrical dome, Lawkananda would be the first pagoda to be seen. It is still used as an everyday place of worship.

An early period temple, Myinkaba Gubayaukgyi is of particular interest for the well-preserved paintings inside, which are thought to date from the original construction of the temple and are therefore the oldest remaining in Bagan. The monument was built in 1113 by King Kyanzittha’s son, Rajakumar, upon his father’s death. Indian in style, the temple consists of a large shrine room with a smaller antechamber attached to it. The fine stuccowork on its exterior walls is in particularly good condition.

Shwezigon Pagoda was built as the most important reliquary shrine in Bagan, a centre of prayer and reflection for the new Theravada faith that King Anawrahta had established in Bagan. The pagoda is between the villages of Wetkyi-in and Nyaung U. Initiated by King Anawrahta, this beautiful pagoda was not completed until the reign of King Kyanzittha (1084-1113). The pagoda is a prototype of Burmese stupas consisting of a circular gold leafgilded stupa surrounded by several smaller temples, shrines and a pagoda museum.

Entering the red-brick Sulamani Temple through its gateway is like entering another world. Built by King Narapatisithu in 1181, it is a large, very elegant multi-storey structure from the late Bagan period. One of the most visited temples in Bagan, the temple still has some frescos although many have been badly damaged due to their exposure to the elements. The light inside is particularly striking as the sun’s rays shine through the outer arches and radiate a soft terracotta glow.

This majestic structure is visible from much of the Bagan plains as it towers above other nearby temples and pagodas. At 61m high, Thatbyinnyu Temple is the tallest temple among all the monuments in Bagan. Suitably magnificent, “Thatbyinnyu” is an original name and signifies the omniscience of the Buddha. Built in 1144, the temple is a big complex structure with seven terraces which all face east Inside the temple are circumambulatory vaulted corridors, four-terraced devotional stupas, a monastery and a library. 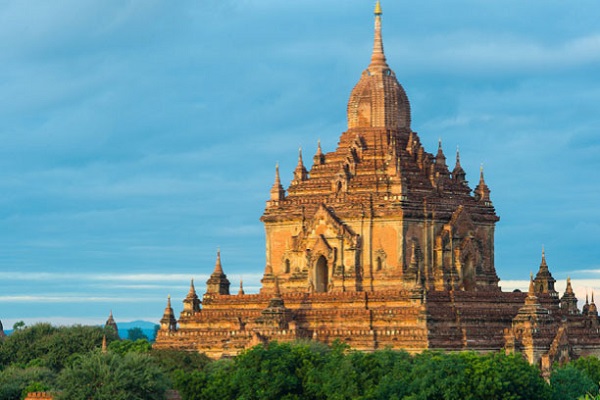 It is the only surviving piece of secular architecture in Myanmar.

It is the only Hindu temple remaining in the country.

Being located in the dry central zone of the country, in the region of Mandalay, means that Bagan is not subject to the monsoon season like many other parts of Myanmar. This imbues the river with even greater importance for the inhabitants of the area. While most visitors arrive in Bagan by air or by road, some take a leisurely (and often luxury) river cruise from Yangon or Mandalay to absorb the beauty and history of Bagan. For those who don’t, it is highly recommended to experience a memorable boat excursion in the early evening to capture glimpses of local riverine life and watch the sunset.

A 1,500m-high, extinct volcano just 60km southeast of Bagan, Mount Popa has great importance to those who believe in the 37 Nats, ancient Burmese animist spirits. Perched dramatically atop a huge rocky outcrop of its slopes there is also the sacred Popa Taungkalat Monastery. To reach the summit of this solitary mountain and fully enjoy the amazing views of this designated nature reserve and national park, you need to climb the 777 steps which are populated with monkeys.

A colourful old religious centre about a 1.5-hr drive south of Bagan, Salay long ago developed its own unique style of Bagan-era architecture. While exploring you can learn more about this and about monastic life. Of the numerous ancient monasteries, a highlight to any trip to Salay is Yoke Sone Monastery which is a cultural heritage site located on the eastern bank of the Ayeyarwady River. It is worth visiting for its exceptional 18th century spectacular woodcarving works. Salay is also famous for its cultivation of plums which are sold all over Myanmar.

A number of villages close to Bagan continue to foster cottage industries through traditional practices. One such place is Zee O Village, famous locally for its enormous, 1,000-year old tamarind tree. Here you can see palm sugar production and local methods of making peanut and sesame seed oils. Witness cow rotating a mortar and pestle to extract the oils in a traditional manner. On the other hand, Nga Tha York Village is renowned for its wooden sandals, earthenware pottery and soya bean paste production.

Numerous traditions have been preserved in Bagan and its surrounding villages, including handicrafts such as beautiful lacquerware, basket weaving, sand art painting, woodcarving and bronze wares. If you cannot make it to a workshop to witness these items being made, be sure to browse some of the stalls around the pagodas for suitable souvenirs and keepsakes. There are also some truly delicious locally produced foodstuffs such as jaggery, toddy, tamarind flakes, plum jams and bean paste.

Enjoying the atmosphere of a pagoda festival in Bagan can be the best time to witness Buddhist rituals and experience the social gatherings of local people. The month long, sanctified festival for Ananda Temple usually falls in January, whereas the one for Manuha Pagoda is held in September or October.

Another famous event in Bagan, Alo-Daw Pyae Pagoda Festival, occurs in December. In April the whole country enjoys the water festival, Thingyan, and in the dry zone Bagan is no exception.