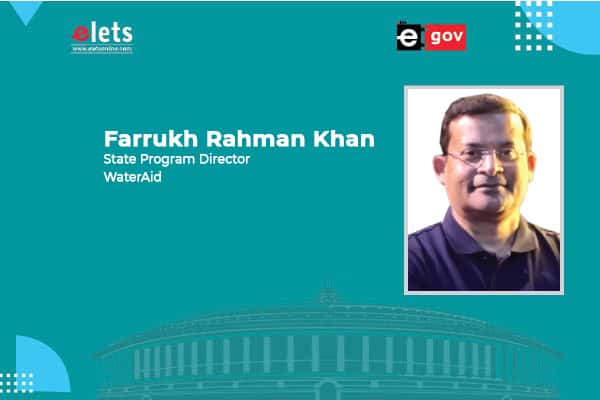 India being the second-most populous country in the world will be a major contributor to the achievement of Sustainable Development Goals (SDGs) globally. One of the most crucial goals is SDG 6 that states – By 2030, ensure inclusive access to clean water and sanitation facilities. This article by Farrukh Rahman Khan, State Program Director, WaterAid intends to draw attention to Uttar Pradesh’s efforts to localise SDG 6 in the State.

In 2015, United Nations (UN) member nations agreed to the UN Sustainable Development Goals – a list of 17 goals targeted to solve the problems of poverty and hunger and tackle the effects of climate change, among other challenges. The 2017 World Health Organisation (WHO)/ United Nations International Children’s Emergency Fund (UNICEF) Joint Monitoring Programme Report states “Universal implies all settings, not only to households, but also schools, health care facilities, workplaces and other public spaces. In fact, SDG 6 is of paramount importance as it is closely associated with or impacts most of the goals’ targets which are ending poverty and hunger, health, food security, climate action, reducing inequalities, decent work and economic growth, responsible consumption and production, sustainable cities & livelihoods for millions of people across the globe, especially in the developing world. SDG 6 should also be viewed from the perspective of basic human rights as enshrined in Article 21 of the Constitution of India and as It was recognised by the UN General Assembly on 28 July 2010.

India being the second-most populous country in the world will be a major contributor or influencer on global SDG performance. With over 200 million population, Uttar Pradesh (UP) is the most populated state in India as well as the most populous country subdivision in the world. Had it been an independent country the state would be the fifth most populous country and therefore has a critical contribution towards achieving national and global goals. While UN Sustainable Development Report 2021 ranks India 120 out of 165 member countries, In Niti Ayog’s SDG index ranking of states for 2021-22, Uttar Pradesh was ranked 25th amongst 28 states for overall SDG ranking and 20th in reference to SDG
6. However, it improved its aggregate to 60 against the national average of 66 and ranked as a ‘performer’ state, ahead of Bihar, Jharkhand and Assam and a “Front Runner” state in reference to SDG 6.

Though the UP has undertaken several affirmative steps in the recent past towards achieving the targets under SDG 6 and indicators set for the state as outlined in the State’s Vision 2030 Document and moving on the right path in terms of enabling policies and programs, the significant ground is to be covered in terms of execution and reaching the last miles. Though the state has achieved 100 per cent Open Defecation Free (ODF) target under the Swachh Bharat Mission, 12 per cent of all rural households with access to toilets had been categorised as LOBs (Left Out of Baseline) – the highest out of all states and Union Territories (UTs).

Similarly, even though the state has made significant progress in terms of tap water supply to rural households from a mere 1.95 per cent in August 2019 to 13.51 per cent covering 35,70,922 households as of date under the Central government’s ambitious flagship scheme Jal Jeevan Mission, over two crore households remain yet to be covered by 2024.

Even though UP is amongst the states with the slowest urbanisation rate (22 per cent as per the 2011 census), with such a huge population, even a slight increase in the urban population will lead to drastic changes on the ground. For example, an increase of just 5 per cent in the urban population share of Uttar Pradesh means almost a crore more citizens in the urban areas adding significantly to the demand-supply gap for water supply and safe sanitation.

It is also significant that Uttar Pradesh alone covers about 28.68 per cent area of the entire Ganga basin, which extends over 11 states of the country and comprises the most fertile and productive land, known to have vast water resources potential. However, major dependency on groundwater sources poses an imminent threat to the water crisis in the near future.

Amongst all the users, agriculture in the state is highly dependent on groundwater with more than 37 lakh shallow tube wells extracting about 41 bcm of groundwater annually, which is about 90 per cent of the total groundwater extraction in the state. Another point to be noted is that 35-40 per cent of total irrigation wells in the country are located in Uttar Pradesh. With the current rate, the projected gross extraction in the state may reach up to 70 bcm or more by 2030 and is expected to cross over the recharge/extractable resource and might put the entire state in a stage of overdraft. The declining rainfall, impacting the natural recharging of aquifers, is making the situation worse. Around 30 districts in the state have reported water quality issues. High Fluoride content in groundwater has been reported from 16 districts while 29 districts have reported the presence of Arsenic in the groundwater. The state needs a water safety and security plan in place to ensure the sustainability of its water resources.

As emphasised in the opening para, the state needs to invest significantly and judiciously toward water and sanitation infrastructure and services contributing to the targets under SDG 6. Achieving this, directly or indirectly, will impact positively towards achieving the targets under other SDGs as well. Besides, the catastrophic waves of the COVID 19 pandemic have also made us realise that the importance of water and sanitation infrastructure is bound to grow as the most effective preventive measure to contain the pandemic in the near future.

Also Read | Boosting Rural Tourism, UP Government Plans to Give a Village Life Feel on a Vacation

Various studies and research have proved that investment in WASH facilities across the business supply chain provides the opportunity to increase workforce productivity and grows the supply security of the product. Cost savings across the supply chain are of benefit to both producers and consumers which will, in turn, increase economic efficiency. Hence, as the state government is aspiring to become a USD 1 trillion economy by 2027, investing in the improvement of water and sanitation infrastructure would be a critical and wise step.