With an aim to make the district clean in true sense, the Ghaziabad Nagar Nigam has undertaken many initiatives under the ecosystem of ‘cleanliness drive’. The idea, which took shape in 2014 after Prime Minister laid emphasis on Swachh Bharat Mission, has come a long way. Through various innovative initiatives and awareness practices, the administration has left no stone unturned to improve ground reality. Mahendra Singh Tanwar, Municipal Commissioner, Ghaziabad Municipal Corporation encapsulates all the pertinent points of the Mission Cleanliness.

An Overview Situated in the middle of the Ganga Yamuna doab, the district of Gzaziabad is roughly rectangular, spreading over huge area (75 km length and 37 kms breadth). On the north, it is bounded by the district of Meerut, while Bulandshehar and Gautam Buddh Nagar are on its southern side; and on the south west, the Delhi state: the national capital is situated.

The Ghaziabad Nagar Nigam started its work towards attaining the best cleanliness practices in 2014 with the Swachh Bharat Missions’ first edition. The objective was to achieve the status of the cleanest city across the nation. The mission started with the initial focus on to solve the problem of open defecation. It was dealt in the manner that it made a difference in the lives and the mindsets of the population who were catered to.

This dream of the city came into existence in the year 2019 when the certification of ODF++ was attained by the ULB. The preparation towards attaining this status dated back to the date of launch of the Swachh Bharat Mission. In 2015, the city started to build upon its infrastructure and basic needs to avail better health and overall lifestyle. Building community and public toilets for the general public marked the start of the end of the Open Defecation scenario. In following years, the Nagar Nigam Ghaziabad strengthened its reach to attain the ODF status and introduced the concept of IHHLs. It has successfully constructed over 4,400 household toilets till date.

This marked the change in the behavioral pattern of the public in the city. Along with constructing toilets in the city, the ULB also conducted various IEC activities to bring the anticipated change.

Ghaziabad Nagar Nigam also conducted workshops for the various sections of the society through street plays, seminars, webinars, etc. so that an understanding could be developed amongst the people about the significance of the cleanliness drive.

Changing the behavioral pattern was not limited to open defecation but it also aimed to ensure city remains garbage free. The city made sure that the right information and education must be imparted to the people of the city. The GNN worked with various NGOs/ SHGs/ RWAs/ Schools/ Colleges/ Establishments, etc. so that the people could be educated about non-littering. Installed litter bins at various places across the city to give out the larger message to public that all waste must be thrown at the designated places.

The pillar of strength in the whole movement was the common people who always lent us support. The city started “janandolan” or the people’s movement for the cause. The movement marked the onset of the era, where one has to convince others to not litter. The “jan-andolan” mandated that there is no waste found lying around. The litter bins placed throughout the city helped in making the mission a success. 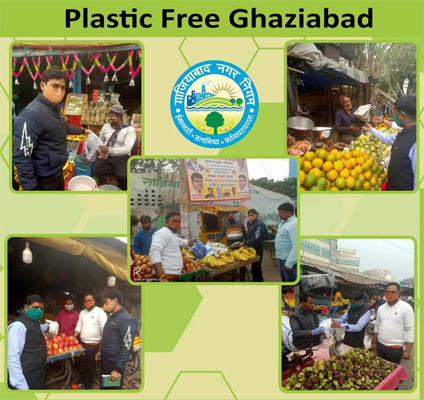 The current ally of cleanliness is the changing mindsets of the people. Working with the people in the slum areas of the city was the most challenging aspect.

Our efforts bore fruits and we got ODF Certificate in 2018

The officers in the Ghaziabad Nagar Nigam jurisdiction made all possible efforts to make sure that the balanced feeling of cleanliness could be attained.

In the year 2018, Ghaziabad Nagar Nigam achieved its goal after receiving the Open Defecation Free Certificate from the Ministry of Housing and Urban Affairs, approving that Ghaziabad as a ULB was OD free.

Next endeavour was to make city garbage free

In terms of making the city garbage free the first step undertaken was to make the city bin free. This was attained in the first version of Garbage free City where three stars were awarded to the ULB for its exemplary work in making sure that the garbage is not seen in the city.

Out of the total output that the city generates in a day of waste more than 90% of it is disposed off in safe and sound manner. The city made sure that anything that produces and is able to eliminate before sending the leftover to the safe sites for complete disposal. The way it is being achieved in itself isworth taking an inspiration from. 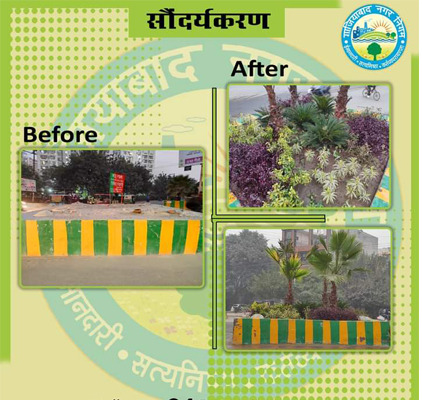 The city managed to make sure that all the stray cattle in the city are put at a place where they don’t roam on the roads and cause mis-happenings. This is the reason the city made way for Nandi and Nandini parks which currently host all the stray cattle in the city. The dung produced in these parks goes through the vermicomposting process to produce manure.

Along with this, the city has set-up MRFs at 7 locations. To cater to the construction and demolition waste that is produced in the city, a plant has been set up to make sure no such waste is seen lying around in the city.

The city in these years being part of the Swachh Bharat Mission has also made sure that all households in the city come under door-to-door collection of garbage. Currently, one hundred percent of households give out segregated waste to the waste collectors from Ghaziabad Nagar Nigam. Leaf and flower composting in the city in all the parks of the Ghaziabad Nagar Nigam jurisdiction and at Sai Upvan make sure that the same helps in reducing the waste generated in the city.

Apart from this, the authority also made sure that all bulk waste generators process all the waste generated at their premises for wet waste and the rest is picked up by the Nagar Nigam waste pickers. Another aspect of disposing off the said waste was making sure that the producers in the ULB are brought under the Extended Producers Responsibility.

Plastic Waste Management in the ULB was always taken into consideration due to its impact on the environment. The guidelines of the Uttar Pradesh Plastic and other nonbiodegradable waste Act put a ban on the use of single use plastic and others. The city in this manner collected over Rs one crore in penalties from use, storage and production of such plastic waste.

The changing mindset towards cleanliness has come to the fore due to various rallies and workshops, conducted by the Nigam. In addition, imposing penalties on repeated offenders also worked well to achieve our mission in order to create Swachh and clean district– Ghaziabad.