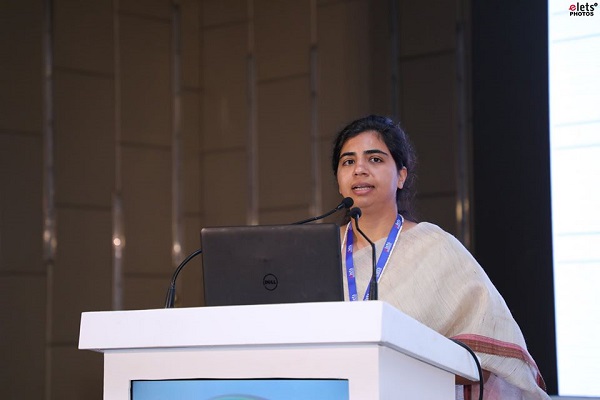 India has done a commendable job in responding to the COVID-19 situation. As a matter of fact, though the country is not yet Corona-free it is in a better position than many developed countries. The Government’s proactive approach and effective execution of well-devised strategies can be accredited for the same. However, the Centre and the state governments also need to plan the exit strategy and the course of a concrete action plan for the post COVID era. Highlighting the challenges, opportunities and the way forward in the post COVID era, with a special focus on the smart cities in Karnataka, Charulata Somal, IAS, Managing  Director, Karnataka Urban Infrastructure Development and Finance Corporation (KUIDFC) addressed a webinar hosted by Dr Ravi Gupta, Founder and CEO, Elets Technomedia.

Smart cities in times of Corona

Describing the COVID-19 situation in the state of Karnataka and the use of technology installed under the smart city mission, Charulata said, “Effective public communication, tracking, data collection, surveillance are some of the areas for which integrated command and control centres (ICCC) have been leveraged.” However, technology cannot replace the hard work of those frontline warriors who are in the field fighting the pandemic, she added.

Adding on to the technology aspect she said, “Bruhat Bengaluru Mahanagara Palike (BBMP) has set up a war room with the help Bangalore Smart City Limited. Similarly, in Mangalore, they have different departments sitting in the ICCC and they have also set up a helpline like the one in  Bangalore.” All the smart cities in the state have done a wonderful job, especially Tumkur and Mangalore, she added.

The availability of labour, materials and logistics will again be a challenge. It will take some time before we are able to use our logistics and ensure that we have adequate movement. And of -course it will not come at the cost of compromising, she said.

Charulata, further took the discussion towards the success of smart cities mission saying, the smart city mission has been a gamechanger in terms of urban development. “These days we have the Area Based Development (ABD) concept where instead of developing the entire city a small area is selected. It has sparked up the aspirations of the people and they have started questioning why our area has not been selected and more”, she added.

Apart from the ABD which lays out ideals of urban development in a city, another game-changing concept was ICCCs. ICCC has posed as an enabler for the civic authorities to take better and effective measures and improve municipal service delivery. Further, the development of the cities on similar lines is the future course of action considering urban development, Charulata said.

Elaborating on the smart city mission, she said, “There are various stages in smart city projects from visualisation, making the DPR, tendering to its implementation, completion, operation and maintenance. And, in Karnataka, we have reached the implementation stage in most of the projects across sectors ranging from energy to mobility to public spaces and others.”

Further, answering a question on digitization in the state, she said, “ In terms of digitization, Karnataka was the first state to implement municipal reforms, by leveraging technology for the same. In 2006, we had a municipal reform cell. Through the years we were able to develop various e-governance apps. The municipal reform cell was then renamed as the Karnataka Municipal Data Society.” Through KUIDFC, the state started Karnataka Municipal Reforms Programmes in 2006 and also developed Urban Mapping Cell, for the digitisation of master plan, which was started in KUIDFC but is now handed over to KMBS, she added.

Charulata detailed on a few key project undergoing. She said, “There are two projects that are being implemented through KUIDFC, one is the Jalasiri Project, which is the Karnataka Integrated Urban Water Improvement Project.” A significant aspect of the project is that apart from building infrastructures, the water supply reforms have also been taken up, she added.

The second project is the Karnataka Urban Water Supply Modernization Project (KUWSMP)  which is supported by the World Bank, said Charulata. “The significance of this project is that we are scaling up the water projects in the cities of Hubli-Dharwad, Belgaum and Gulbarga. We will shortly be executing the agreement and start the Project”, she added.

Adding on to the projects Charulata said, “Another interesting project under KUIDFC was the development of the concept note for Bijapur, Badami, Aihole and the Pattadakal areas in terms of economic development of heritage towns.   It was a huge exercise for us in which NIUA, the World Bank and some of the other agencies came together.”

Lessons from the pandemic

Charulata concluding her address, said, “The most important lesson we have learned is that we are not operating in silos. To make a smart city a success there are lots of coordination that is required at the level of cities and across the various department and most of all from the public. At the end of the day, we need to take everybody together and move ahead.”