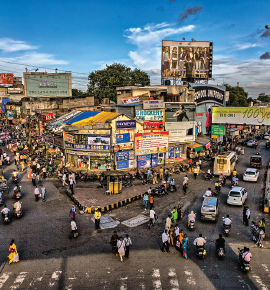 With Nagpur evolving as the country’s topmost smart city in barely five months, outmaneuvering all other cities in the best implementation of smart city plan, Sandeep Datta of Elets News Network (ENN) tries to decipher this tremendous success.

Widely known as the Orange City, Nagpur has been identified as one of the best Indian cities in terms of liveability, public transport, green cover, and healthcare as well.

Following a recent stock-taking exercise conducted by the Urban Development Ministry, Nagpur, though chosen as a smart city in September 2016, has managed to achieve the best investment conversion ratio (ICR). The ICR indicates the extent of conversion of approved Smart City plans into investments through ground-level implementation.

Nagpur, which has overtaken 33 cities, reported an impressive performance with an ICR of 249 per cent having lined up an investment of Rs 2,500 crore, as against the Rs 1,002 crore investment proposed in the approved smart city plan for the city, with additional resource mobilisation from different sources. Smart City is a city which is committed to use ICT, and a model of higher quality infrastructures that improve the quality of citizens’ life while reducing public expenditure. With urbanisation occurring at a fast pace, there’s need for our cities to be developed accordingly as ‘Smart Cities’.

Making a difference – the Nagpur way

While striving to realise Prime Minister Narendra Modi’s favourite Smart Cities dream, the Nagpur Municipal Corporation (NMC) has evolved and applied various key strategies. Safe and Smart Nagpur is one such project. In this, representatives of the NMC visited the public in person and ensured actual concerns and requirements could be understood. It led to the observation that majority of the people desired the city should be developed as a safe, clean, and green city.

Such an understanding has enabled providing facilities much faster, process-oriented way. Besides, the IT-centric services empower citizens to receive all government services, without physically visiting any government offices.

The city authorities, despite all their efforts and strategies, don’t hesitate in taking away the credit the people of Nagpur deserve in realising a big dream with a ready-to-change mindset. It has been felt that availability of internet and public’s access to technology world from the comfort of their homes can actually facilitate the public getting access to several IT-enabled government and nongovernment services.

Bandwidth in a Smart City

Considered vital for the growth and development of a Smart City is bandwidth of infrastructure, the city also began thinking to have its own infrastructural system. It aimed at providing a better experience leading to launching and working on several pan-city initiatives.

For instance, Nagpur is set to introduce a multi-utility kiosk, whose main utility is that it will be a ticket vending for the public transport system and top-up mobility smart cards and others.

An app has been launched by the civic body which helps in ascertaining the accurate time of arrival of public buses and even knowing the availability of seats along with the route the bus will take. Smart Solid Management system A smart solid waste management has been put in place, under which vehicles meant to collect garbage from door step are fixed with Global Positioning System (GPS) for online tracking.

A smart solid waste management has been put in place, under which vehicles meant to collect garbage from door step are fixed with Global Positioning System (GPS) for online tracking. Under this, it is being planned to give priority to the buses, which can check violations like jumping of signals, illegal parking etc.

To improve the public bus-based transportation system, NMC has procured 240 buses, leading to an increase of 3 per cent in the number of passengers travelling by public buses.

“We have a strong water supply system and we are moving towards 24/7 water supply in the city. We have a persistent problem of sewerage in the city which we are trying to address by improving the infrastructure.” – Shravan Hardikar Commissioner, Nagpur Municipal Corporation, told ENN.

Water availability in the city and reduction in water wastage/NRW

Safety/Security scenario in the city

Three dedicated helplines for women, senior citizens and children have been opened. Number of respondents has also risen from 10 to 20 on each helpline. Also, five major traffic junctions have been covered under CCTV surveillance. GPS-based police vehicle tracking has also been initiated.