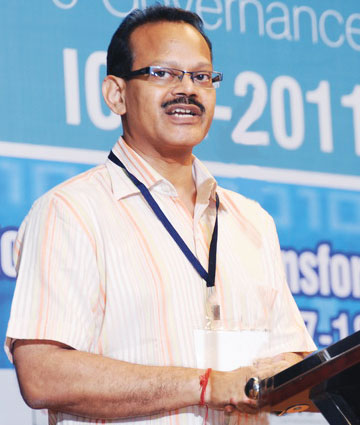 Gujarat Food and Civil Supplies Secretary Raj Kumar talks to Anand Agarwal and Sunil Kumar about the important features and challenges in the state’s much-applauded reform of the Public Distribution System (PDS), which has now been transformed into a biometrics-based Smart PDS

What are the aims and objectives of the Public Distribution System (PDS)?

PDS was established with an objective of ensuring food security of the common people in the country. This is to be achieved through the provision of subsidised foodgrain and other essential commodities, sold through Fair Price Shops (FPS). Under the PDS, the Central Government procures grain from farmers and then allocates it to states, which in turn, are responsible for identification of beneficiaries and delivery through the Fair Price Shops. The country moved from a universal PDS to a targeted PDS (TPDS) in 1997 with an objective of maximising benefits for the most needy, categorised as Below Poverty Line (BPL) households. The Above Poverty Line (APL) households also receive certain benefits, subject to conditions.

Inclusion and exclusion errors, leakages and diversion of foodgrain and other commodities meant for PDS beneficiaries to open markets are the major problems that the PDS is facing today.

As per a 2005 report of the Planning Commission, 58 percent of the foodgrain meant for PDS is diverted to the market. This is not only a huge loss to the exchequer, it also has extremely high social costs as this means a large proportion of people are not having access to required nutrition.

Why did Gujarat decide to use ICT for reforming PDS?

Under the proposed National Food Security Bill, a legal entitlement to food would be created. This will make it imperative for governments to be able to track every single transaction in order to be able to confidently say that a particular beneficiary has been covered. Such transaction-wise monitoring is possible only with use of ICT-based solutions as manual systems cannot provide the degree of reliability and concurrency needed for this purpose.

In addition, adoption of ICT has helped us transfer control into the hands of the beneficiary and thus control leakages of PDS grain to the open market.

How is the Gujarat model of PDS addressing the issue of bogus ration cards?

In Gujarat, we are currently in the pilot stage of an ICT-based system under which approximately 120 pilots are running across the state. The Biometric Based Barcoded Coupon System of PDS delivery seeks to integrate ICT to improve service delivery, empower beneficiaries, reduce corruption and increase transparency in the system.

As I said earlier, illegal diversion is one of the major issues facing PDS. In our analysis, we found that the existence of bogus ration cards is the main reason for diversion of foodgrain. Bogus cards themselves are possible because as of now, there is no unified mechanism of identity management. Therefore, the challenge is to manage identity. While work on a nation-wide UID is going on, we cannot wait for that to be completed and then say ok now we will start reforming the PDS. We decided not to wait for the UID but to develop a system that would be UID compliant, so that the day UID is rolled out, we are ready to integrate it with our systems.

In order to establish identity, we made the Elector’s Photo Identity Card (EPIC) a basic document, as electoral rolls are regularly revised and updated.

In addition, we also made it mandatory for each card holder to furnish us with copies of the other documents that contain identity, such as the LPG connection no., electricity connection no. etc. Doing so would minimise the chances of fake identity as it is unlikely that the same person would have multiple set of such documents for each purpose.

We have obtained data from other Departments in electronic format and built a custom application to authenticate the information furnished by the beneficiary against Departmental records. Presently, digitisation of the forms is in progress, after which the information would be authenticated. It can be expected that a significant number of bogus cards would be detected in this stage as well.

How have you ensured that the beneficiaries get their quota of foodgrain and other commodities under the PDS?

The real problem in PDS is ensuring delivery to the beneficiary. Issues such as bogus cards are mere distortions that can be corrected with appropriate steps. The removal of such distortions, by itself does not guarantee delivery however.

In order to ensure delivery of commodities to real beneficiaries, we have started issuing ration cards with 2D barcodes. At the time of issue of such cards we capture photo and bio-metric details of at least one member of the beneficiary household. In order to take delivery for the month, any one of the beneficiaries whose details have been captured in the barcode has to first visit the designated eGram Centre (Common Service Centre). After online verification of biometric details, individual coupons for each commodity that the beneficiary is entitled to are generated. Each coupon has details of price, commodity, dealer etc

The beneficiary then goes to the FPS and hands over the coupon and is given the commodity in return. The coupon is proof of transaction and the dealer would get commission only on the coupons that he submits for reading at the e-Gram centre. There is a separate coupon for each beneficiary. This way, the beneficiary has been empowered to authenticate each transaction. This system would also help us meet our obligations under the proposed NFSA as we can track every beneficiary household and ensure that it is receiving its due entitlements.

At present, there is a perverse incentive available to the FPS dealer to indulge in corruption as there is no monitoring or control. Adoption of the Biometric Based Barcoded Coupon System of PDS delivery will help address this issue and control corruption and improve transparency in the functioning of the system.

How has the target beneficiary group reacted to Smart PDS?

Teams from the World Food Program and the Central Vigilance Committee headed by Justice Wadhwa have inspected the pilots currently underway and have interacted with the beneficiaries. In their interactions, the beneficiaries have stated that they don’t mind the extra step of going to the eGram centre to get their coupons as this has led to overall improvement in service delivery.

The system has assigned a default FPS to each beneficiary household, but they would be given the freedom to choose another shop at the time of coupon generation if they are not satisfied with services at the designated shop. In this way, monopoly of FPS shopkeepers over beneficiaries could be reduced, and competition among FPS shops can also be encouraged. This has also empowered the beneficiaries and control has shifted to their hands from the FPS shopkeepers earlier.

The Wadhwa Committee talked about the economic unviability of the PDS. It also recommended that the scheme of Model FPS be taken up on a larger scale. What is the status on the same?

We are now undertaking a review of the FPS viability in order to make it more rewarding for the shopkeepers. Some of the proposals under consideration are:

In your view, what are the major challenges that the state-wide rollout of Biometric Based Barcoded Coupon System of PDS delivery might face?

A very ambitious timeframe of March 2012 has been set for the state-wide rollout of Biometric Based Barcoded Coupon System of PDS delivery. Meeting this deadline is going to be a stiff challenge but we are confident of being able to do so as we are fortunate to have a very stable, visionary and reform oriented leadership of the State government and the team work.

In some areas, the eGram centres are not in the proximity of the habitations. We would look at authorizing private kiosks to provide authentication and coupon generation in such areas.

Capturing, efficiently storing and authenticating the biometrics of such a large population is a challenging technical job, connectivity of eGram centres via VSAT links is at times unreliable. Challenges would be always present in any endeavour that you undertake, but we have prepared a comprehensive strategy to ensure timely rollout of Biometric Based Barcoded Coupon System of PDS delivery.