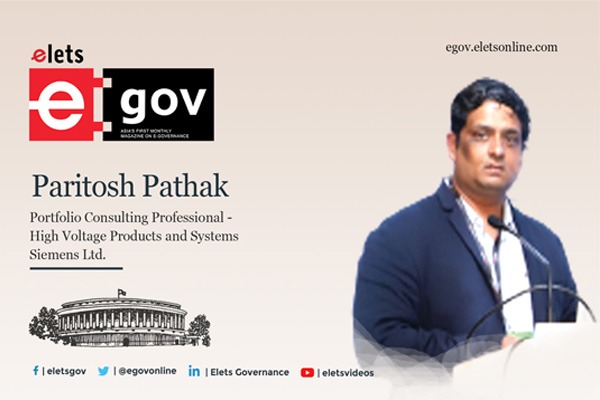 Paritosh Pathak, Portfolio Consulting Professional – High Voltage Products and Systems, Siemens Ltd., spoke about how the transmission sector as a whole helps the world achieve carbon neutrality in the future at the 4th Elets National Energy Summit in Mumbai

There is an increasingly urgent need to achieve decarbonisation in all sectors worldwide and actions to reduce Greenhouse gas (GHG) emissions must be taken fast.

United Nations Framework Convention on Climate Change (UNFCCC), Paris, is an agreement signed by approximately 190 countries and the objective was to keep global warming potential under 1.5 degrees centigrade. Each country must determine and report regularly on how, and with which scenario they are going to contribute to lesser gas emissions, and thus reduce global warming.

He further informed that US has set an aim to achieve 100 per cent clean energy generation and is targeting to attain Net Zero GHG pollution by the year 2050. On the other hand, EU has set a target to be the first climate-neutral continent by 2050. Talking about China, it is going to witness a CO2 emission peak by 2030, and by 2060 they are targeting carbon neutrality.

He averred, “India has set an ambitious target of the carbon neutrality of 2070 and we can surely see the development by then. We have already reached a certain level of achieving the growth of renewable energy. Our targets are very high and the government is talking about 500 gigawatts of renewable energy. The government of India is also pioneering and front-running toward high hydrogen generation. Demand-side management is an important aspect that comes when generation is talked about.”

There are 17 Sustainable Development Goals defined by the United Nations out of which three are extremely important for the power or transmission industry – good health and well-being, affordable and clean energy, and climate actions.

“When we talk about these goals we mean zero toxicity, zero-emission, zero pollution, and zero use of Fluorinated gases. So, all the industries that are manufacturing this transmission product and systems can initiate their own factories to be carbon neutral by having solar as a generation and source of supply for their own production. This is something that is already implemented at Siemens”, he added.

When we discuss the Paris agreement, U.N goals, and relevant fields for the transmission industry, regulatory bodies play an extremely important role. The regulatory bodies in the world have already opted for F-gas regulation in the European Union. The EU is doing all things that can be done to achieve carbon neutrality. Denmark, Sweden, Norway, Deutschland, Germany, and the Netherlands have taken the initiative to reduce the use of F gases which has created pressure on the power industry.

He further explained, “Sulphur Hexaphrodite Gas (SF6) gas was started in the 1960s. The first SF6 circuit breaker was delivered and commissioned in the world in 1964, and since then we have been using this gas. It was very good because it gave us high dielectric strength and it is being used commonly everywhere.”

The pressure on power companies to phase out SF6 and other F-gases is especially high:

EU F-Gas regulations are targeting the prohibition of 145 KV type switchgear which is extremely important. It complements their idea wherein they talk that by 2050, complete EU will be carbon neutral. These particular actions that we have seen right from the Paris agreement till here are putting pressure on T&D equipment manufacturers, to see and look for another source of insulating media. The commitment from the people of each undersigned is committed to deliver T&D equipment free of fluorinated gases that need to enable this transmission. It will be done based on science-based Net Zero targets wherein a lot of energy needs to be incorporated and invested in R&D aspects.

He stated, “At Siemens, we are developing a combination of clean air and vacuum technology. We have developed our products with a vacuum insulation, combination of nitrogen and oxygen, pure air which will be zero CO2 emissions, zero toxicity, and completely F gas free. So, technology is completely environment friendly.”

We have developed up to 400 KV however validations are in progress. 145 KV has already been developed and installed globally at various locations.

“We are talking about the transmission industry where switch gears, power transformers, instrument transformers, everything can be monitored via the Internet of Things (IoT) and Artificial Intelligence (AI) remotely and not only by OEMs but also by users”, he added.

“Energy transmission is already becoming a reality around the world and we at Siemens already have more than 10 million hours of commercial operation, 2.2 million tons of CO2 equivalents saved, approximately 2000 units already supplied, and more than one thousand units in operation”, he concluded.