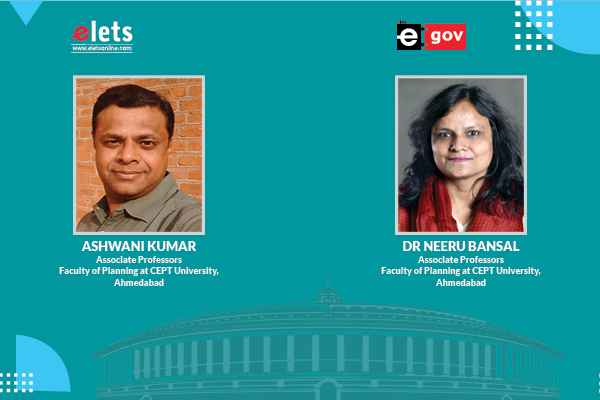 Globally, realising water as a basic need of human life, the settlements were established along the river banks and Ahmedabad is one such city. The growing water problems— floods and/or water scarcity have an adverse impact on life, growth, prosperity, and national security. According to the Composite Water Management Index (CWMI) report released by the NITI Aayog, 21 major cities in India will run out of groundwater by 2020, affecting access to water for 100 million people (NITI Aayog, 2019). This calls for urgent and improved management of water resources. Also, among the 17 sustainable development goals (SDGs) laid out by the United Nations, to which India is committed, many have a direct and indirect linkage with water. SDG 6 specifically focuses on ensuring the availability and sustainable management of water and sanitation.

Ahmedabad, located along the Sabarmati river, has an area of 505 sq km consisting of seven zones and 48 wards. The city population has grown from 55.77 lakh (census, 2011) to 70.33 lakh in 2021 (provisional estimates). The city is a major economic and industrial hub of the country. It has several infrastructural landmarks around the water which make the city distinct. The modern projects include the Sabarmati Riverfront, Kankaria Lake, and historical water management structures like Adalaj ni vav, etc. The city in the past had followed traditional water management practices like tanka system which can still be seen in the old city.

Ahmedabad receives an average rainfall of 782 mm, mainly during the monsoon months of June to September. In earlier days, the natural water system of Ahmedabad constituted of number of lakes and numerous streams connecting them to river Sabarmati. Over the years, most of the natural drains were lost to urban growth. The lakes have reduced from 204 in 1960 to 105 in 2021.

The current water demand for Ahmedabad is estimated to be approximately 1090 MLD. This demand excludes major industrial, commercial and institutional demand. The water demand for the city is met from multiple sources which include Narmada main canal, Mahi River, and groundwater. This water is treated at water treatment plants and supplied to the city (Table 1). The domestic water supply system for the city is represented in Figures 1 and 2.

Water supply coverage in slums is 75 per cent due to the liberal policy of Ahmedabad Municipal Corporation (AMC) for granting and providing water connections irrespective of tenure status. The city has an intermittent water supply and does not have 24×7 water supply as desired by service level benchmarks (SLB) set by the Union Ministry of Housing and Urban Affairs (MoHUA). The maximum supply of water by the corporation is for two-three hours a day.

The city was mainly dependent on groundwater sources till 1970-80 (Figure 3). As a result, between 1975 and 2000, the groundwater table dropped 3 to 4 metres a year. Various augmentations from surface water sources were done over the years. This resulted in a shift from dependence on groundwater to surface water sources. The approach currently is inclined towards bringing water from another source, which may be far distant through pipelines, the cost of which is of course enormous. For example, most of the city water demands met through piped supply is met from Narmada or Mahi river.

Sewage and industrial effluents are the two major sources of urban used water. The AMC has 16 operational STPs as of 2020 to treat 993 MLD of sewage and two more are under trial. The treated sewage from STPs now has to meet stricter standards prescribed by the National Green Tribunal (NGT) in 2019.

For the industrial effluents, there are seven common effluent treatment plants (CETPs) to treat effluents generated by micro, small and medium enterprises (MSMEs). The large industries are supposed to treat their own effluents.

The treated sewage and the industrial effluents are discharged into the Sabarmati, downstream of Ahmedabad. The infrastructure created has not been able to meet the prescribed norms and, therefore, pollutes the river (Bansal, 2017). The focus is currently on end-of-pipe treatment (EOP) for sewage and industrial effluents. This may not be the best practice keeping sustainability of water in mind.

Sabarmati river receives the used domestic as well as industrial water, with or without treatment. In addition, there are some stormwater drains opening into the river which also carry pollution due to illegal connections by residential societies and industries located in the city. Some of the so-called treated sewage and treated industrial effluents are also discharged into Kharicut, which finally meets the Sabarmati before meeting the Gulf of Cambay.

The release of these discharges has resulted in extensive pollution of the river. The river quality, upstream and downstream of the city is shown in Figures 4 and 5.

The river, downstream of Ahmedabad is not able to meet the bathing water quality standards. The dissolved oxygen (DO) is zero in most stretches and the river can be termed as ‘dead’. There is no question of any riverine ecosystem with such low DO. The values of biological Oxygen Demand (BOD) are many-fold higher than the acceptable levels. Besides, the river has heavy metal pollution (Bansal and Parthasarathy, 2020; TOI, 2021).

The extensive pollution in the river has even polluted groundwater in downstream villages. The impacts of this are enormous. It has resulted in health issues, impacted livestock and agriculture as heavy metals seep in the vegetables grown using the polluted water which are then consumed by the city residents (Bansal and Parthasarathy, 2020).

The high pollution in the Sabarmati has been taken suo-motu by the Gujarat High Court. The court has taken the AMC, pollution control board, and the polluting industries to task for polluting the river and has issued many directions to check the river pollution and restore the river quality. Prior to this, there have been multiple cases where either the National Green Tribunal (NGT) or the Gujarat High Court had taken cognisance of pollution in the Sabarmati and had issued multiple directions but so far, we have not seen any improvement inspite of the infrastructure created.

In the context of ongoing discussion on sustainable and resilient water management in Ahmedabad, the following issues are identified.

The non-revenue water (NRW) in Ahmedabad is more than 30 per cent which is higher than the SLB of <20 per cent. There are some initiatives to lower these losses by using the SCADA system, however, a long way still needs to be covered.

The unmetered water connections is another crucial issue in the city. Since the connections are not metered, water tariffs are not based on the quantity of water consumed. It is covered as a part of the property tax, which is levied based on the plot area or built-up area. This is not good practice to keep a check on the optimum use of water and prevent its wasteful use.

As far as cost recovery of the water projects is concerned, there is hardly any thinking on this. Water supply is an obligatory function of the local body and is highly subsidised and is not at all reflective of the cost of the project. The taxes may not even be meeting the operation and management costs of the water supply system.

There is minimal reuse of water in the city; hardly 2 per cent of water gets reused. Water being a scarce resource, there should be an attempt to reuse every possible drop of it. The city government is trying to promote the dual plumbing system in residential societies. Even at the city level, there are some attempts to reuse water. For example, there is 0.5 MLD STP set up in Vastrapur lake which would be used for watering the green areas. There is an ongoing discourse on using treated sewage for industrial purpose, however, much still needs to be done to make it practically possible.

Storm Water Management is another challenge faced by the city. The number of pluvial flood incidences in the city have increased. The city’s capacity to absorb runoff is rapidly decreasing due to the high density of built-up, low green cover, choking of natural drainage by waste dumping, etc.

Pollution of water resources is another big challenge. In the city, the treated/untreated water gets discharged into the Sabarmati. This has resulted in high levels of pollution in the river which has now become a chronic issue.

The stormwater, on how it gets managed becomes either a resource or a problem. Recognising the shortage of availability of water to meet that current and future needs of the city, the approach should be to conserve every possible drop of water. The initiatives of the city to manage water are discussed in this section.

The Riverfront development is another project. The project though intended to rejuvenate the river, keep it pollution-free, is also an attempt to attract the investment of real estate players in the vast land reclaimed as part of the project.

Under Smart City, the city water supply is being monitored through the SCADA system. The main functions of the SCADA system include real-time monitoring of all hydraulic and analytical parameters of WDS, WTPs and French wells; monitoring of pumps for discharges and electricity consumption; monitoring of treated water quality; and saving expenses in electrical and chemical inputs.

The natural water system of Ahmedabad—lakes, streams and the Sabarmati river, all have been modified significantly over time. This is because of rapid urban expansion, inadequate understanding of water systems, and not integrating blue infrastructure into development. The number of lakes which have disappeared from the city landscape is high. Some respite is there due to recent initiatives such as interlinking of lakes, lake rejuvenation, and reduced use of groundwater. The city’s water supply has been augmented from surface water resources, reducing its dependence on groundwater significantly. However, this has created a challenge of dependence on surface water brought from far away from resources, an approach which is not sustainable.

The city is currently facing the issues of water governance and meeting the expenses in operations and maintenance of the water supply systems, the high non- revenue water, unmetered connection, minimal reuse of treated used water etc. The disposal of treated and treated water into the river from both domestic and non-domestic users has made the river devoid of oxygen downstream of Ahmedabad.

For sustainable management of stormwater, every drop of water that falls needs to be conserved. This is far away from being realised in the city. There is hardly any initiative for integrated water resource management.

The SDGs linked to water are not being realised in the city so far. With the current initiatives and the challenges, the city’s water system is yet far away from being sustainable and resilient. The current initiatives are a move in the positive direction, but much needs to be done to make the city’s water system sustainable and resilient.