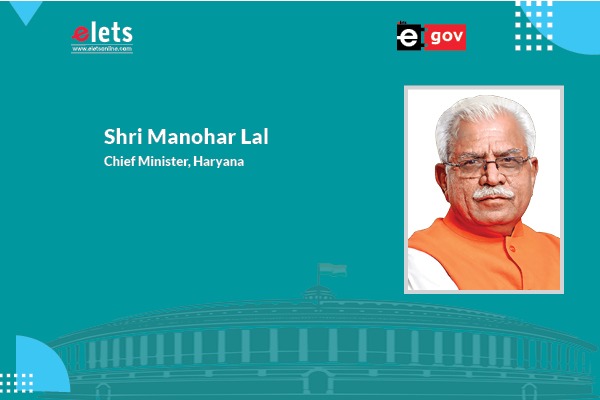 Haryana is one of the states that have been at the forefront in adopting technology interventions to make the government departments and public sector utilities future- ready. Highlighting the state’s preparedness for a technology-driven future, Chief Minister Shri Manohar Lal addressed Elets Digital Governance Summit, Haryana Edition on February 25, 2022. He graced the summit with his presence as the Chief Guest.

Chief Minister Shri Manohar Lal is known for taking a keen interest in the digitisation of services and emphasising the use of information technology (IT) in governance. He is credited with bringing about digital transformation in the state of Haryana

In his keynote address, the CM said that he has been focussing on digital governance since 2014 when he assumed office. “We have felt the need for digital governance to reduce human intervention while delivering services. This has reduced corruption to a great extent and helped in improved service delivery,” he said.

He called the system of digital governance S.M.A.R.T viz. Simple, Moral, Accountable, Responsible and Transparent. For a common man, it has meant that the long queues seen at public offices for various works have now disappeared as the common man is able to avail services at the click of a button and does not have to run after a government employee to get his work done. 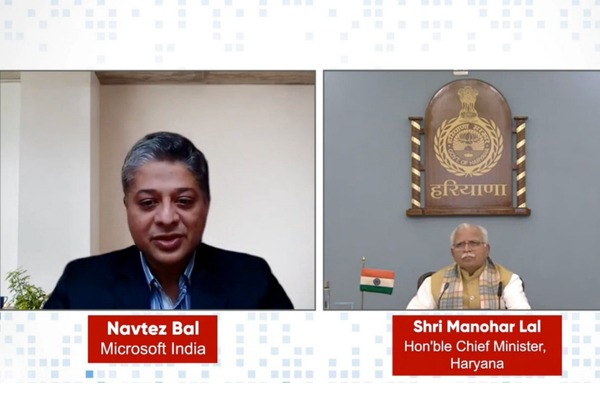 On the transition from traditional to digital means, the CM highlighted that “the common man was not able to avail the benefit of schemes being announced by the central government and the state government as he was not able to reach the government window. Even if he reaches the window, the complications of schemes are so much that he leaves in disillusion. However, with the launch of digital services we have ensured maximum governance and minimum government.”

The state government’s aim is to improve the annual income of people in the state and the target of Rs 1.8 lakh per annum for every family. “From March 2, 2022, the next phase of enrollment will take place and we are targeting nearly 20 lakh families in the state,” he added.

The state government is embracing technology to ensure transparent governance and moving from e-governance to good governance.

Shedding light on e-governance initiatives taken in the state, the CM said that the state has developed a systematic system under which people do not have to make frequent visits to government offices to get their work done. They can either visit their nearest Community Service Centre (CSC) or access the services online to avail the advantages of government services.

Further, he gave insights into the Antyodaya Parivar Utthan Yojana which has been started to bring the poorest of the poor into the mainstream. “The Haryana Government is strengthening the online system to start giving direct benefits to the beneficiaries for financial stability and inclusion. 27 departments are disbursing the amount to beneficiaries of 145 schemes through DBT. Also, we have started giving jobs on the basis of merit to ensure transparency,” the CM said.

Emphasising good governance, he said that the state government is embracing technology to curb corruption in job transfers often seen in the government sector. An online transfer policy has been created which has been successful enough that other states are now trying to emulate it.

“With digital governance, we are facilitating citizens to register their grievances and complaints through the CM window. About 8.6 lakh complaints have been resolved which were registered at the CM Window. Moreover, the government started the Dial-112 scheme for police help in just 15 minutes,” he further said. The Haryana Government is committed to ensuring digital governance in all sectors for overall development.

Antyodaya Saral Portal has been set up to help the common man receive the benefit of schemes. 18,552 Atal Sewa Kendras have been set up and 549 schemes of over 40 departments have been made available online and about 5.4 crore applications have been received so far.

A digital scheme has been initiated for the jobless who can register online for employment and around eight lakh people have done the registration so far. “Meri Fasal Mera Beaura” is a scheme launched for the farmers who are now able to sell their produce in e-mandi. The farmer can buy fertilisers, avail subsidies and
economic assistance under various schemes while sitting in the comfort of his home.

The entire procedure of CLU (change in land use) has been made online and it is being granted online within 20 days. The permission for CLU too is given online and this has helped rein in corruption as well.

Haryana has made rapid advances in the digitisation of records and e-office has been launched in all the districts of the state. Emphasis has been laid on paperless work in the government.

During the COVID pandemic, we have made the best use of digital governance and have put into service 30 portals, websites and apps. Haryana Sahayak mobile app was launched to give out information regarding COVID-19 and another app was developed for those wanting to volunteer their services during the pandemic time. E-sanjeevani OPD was started to give treatment to people in the confines of their homes.

The digitisation of services has not only helped us in reaching out to people at the grassroots level but also has data about people. This is categorised data that has helped us map people and allowed us to understand the dynamics of the state. The biggest benefit has been to the people who would earlier be hassled to visit time and again the district or state headquarters to get their grievances resolved or get the needed paperwork done pertaining to the government.