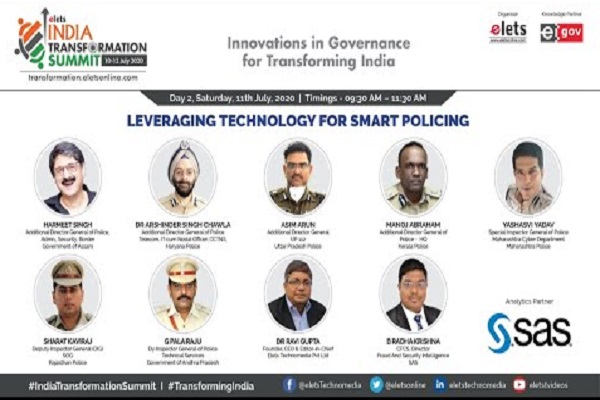 Yashasvi Yadav, Special Inspector General of Police, Maharashtra Cyber Department, Maharashtra Police commenced by saying, “Before framing strategies we need to understand real problems and points of focus in the cybersphere.” He further cited four incidents to highlight how grim the cybercrime can go and said that it is no more limited to fraudulently loot money but has now turned lethal. Citing examples of cybercrime, he said, “Recently, the Maharashtra police found a marketplace on the darknet which was selling the blood of COVID recovered patients at a price of Rs 10 lakh per litre for plasma therapy. “Darknet is one of the major challenges in the cybersecurity space”, he added.

Further, Special IG Yadav said that the extent of cybercrime in times to come will be double than our vision of $5 trillion economy viz $10 trillion.

But today we can straightaway fetch out the data linked to crime from CCTNS database. Today, investigating officers can access the previous record of any criminal or suspect they arrested from anywhere in the country, he added.

Talking about the way forward, ADGP Dr Chawla said, “Today there is a need for facial recognition systems to identify criminals in gatherings or crowds using smart cameras…Eyes of police personnel must be supplemented.” Modern technological inputs in any sphere is art now. How better you can arrive at it defines the fate of one’s actions, he added.

Sharat Kaviraj, Deputy Inspector General (DIG), SOG, Rajasthan Police addressing how in Rajasthan the police used technology to overcome lockdown challenges. DIG Kaviraj said, “The moment the lockdown came in, there was a need for passes. We started designing a system for issuing passes in a no-contact manner. Firstly, what we did was to ducktail the whole thing where we used the RajCop app. Once you apply for a pass the thing will automatically move to the district police for approval. So, by designing this we ensured that we were able to cater to people who needed passes. Also, we used emails as a solution and a format to run the entire process.”

Harmeet Singh, Additional Director General of Police (ADGP), Assam said, “During the lockdown, we used two-pronged strategy for two-way communication so we can connect with people and people with us.” Platforms like social media, WhatsApp and videos were used for communication purposes, he added. Further, he said, “We have a very robust system of WhatsApp connectivity and if we are sending messages on that portal we reach almost every individual in the state having a smartphone.” Moreover, an immediate helpline call centre was set up and the helpline service was not limited to phone calls but the services are extended to WhatsApp messaging and social media platforms, ADGP Singh added.

ADGP Singh also mentioned various initiatives that the Assam police had taken during different phases of lockdown ranging from helping migrants to reach back to their home state or town, providing e-tickets, setup system for delivering essentials and medicines, and much more. While concluding his address, ADGP Singh said, “We need to remember that while focusing on technology we should not forget the human aspect. The technology itself should be user friendly. It should not be for the tech people but for a layman.”

Asim Arun, Additional Director General (ADG), UP 112, Uttar Pradesh Police addressing smart policing said, “Until we had Call 112 system in place there were a lot of complaints from people stating that no hearings are being done. However, following the implementation of the Call 112 system things have improved significantly.” As a system, this has been hugely successful and it transformed policing, he added. Further, on improving the Call 112 UP system, ADGP Arun said, “We need to collaborate for knowledge sharing with private firms like the cab aggregators, food delivery apps, etc. Such a move can be beneficial for us to design a better system.” There is a need for stronger systems and not supercops, he added.

Speaking on responding to COVID situation, ADGP Arun said, “In the initial 10 days we developed a robust system by communicating through videoconferencing platforms.” The lesson learnt here is if we are able to adapt quickly to the situation and if we are able to execute things we can mitigate adverse situations effectively and timely. Further, he added, “We should go for online training programmes as a knowledge sharing platform for police forces from different states to learn from each other.”

Manoj Abraham, Additional Director General of Police (ADGP) – Headquarters, Kerala Police joined the session and expressed his paradigm on the digital arena and the use of digital media for improving policing. ADGP Abraham highlighting the work by Kerala Police said, “When it comes to social media usage, we are the top police force in the world. We used drones effectively to keep a check on lockdown norms being followed. We brought out a unique SOP for how to function in cases like COVID. Moreover, we came out with a fraud prevention app which was very useful for the public and it sends alerts to people whenever a fraudster calls them.” Kerala Police is using mobile sanitisation vehicles.

Also, we have improvised the PPE kits as the traditional ones were uncomfortable to use while on the field, he added.

Ankit Jain, Director, SAS India also participated in the discussion and laid out his views on how policing has changed with time and how technology has enabled law and enforcement agencies to effectively prevent crimes, investigate, collect data, surveillance, complaint redressal and regular policing.