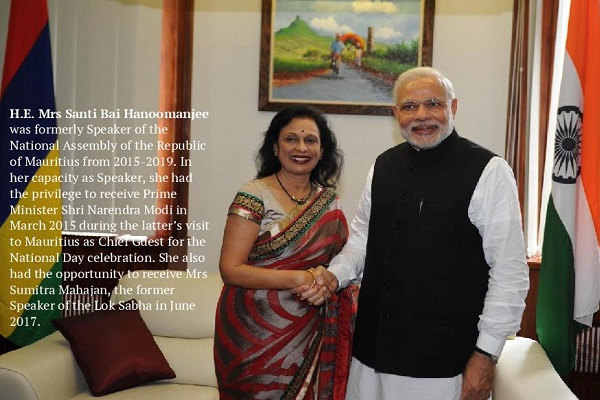 India–Mauritius relations have evolved over 180 years from a shared heritage and culture to multifaceted partnership in different areas including education, healthcare, science and technology, investment, trade & maritime security. As COVID-19 pandemic poses a major challenge for the global economy, both countries are looking forward to further strengthening their bilateral partnership to jointly address the challenges. Shedding light on the same, H.E. Mrs Santi Bai Hanoomanjee, High Commissioner of Mauritius to India, interacted with K. C. Mishra of Elets News Network (ENN).

Mauritius is one of the few countries which have managed the Corona pandemic quite well. How could your government pull this feat and how is the situation now?

The World Health Organization (WHO) had estimated that Mauritius had the highest risk of exposure as regards to COVID-19 in Africa. Its model projected nearly 90,000 moderate, severe or critical cases and over 800 deaths on the island. However, Mauritius recorded just 342 cases and ten deaths. The first case was detected on March 18, 2020. The last new local case of COVID-19 in the community was recorded on April 26, 2020.

Since the outbreak of the pandemic on January 22, the government started screening passengers at the airport and the ports. Quarantine centres were opened to accommodate passengers coming from high-risk countries and a Rapid Response Team was set up in each regional hospital to assess and admit passengers with symptoms of COVID-19. Sensitisation campaigns started by the Ministry of Health and Wellness through radio, TV, written press, pamphlets and posters.

All positive cases of COVID-19 were managed in different hospitals/isolation centres. Several hotels were converted into COVID-19 treatment centres for the management of very mild cases. Contact tracing was initiated to identify people who have been in physical contact with infected patients. 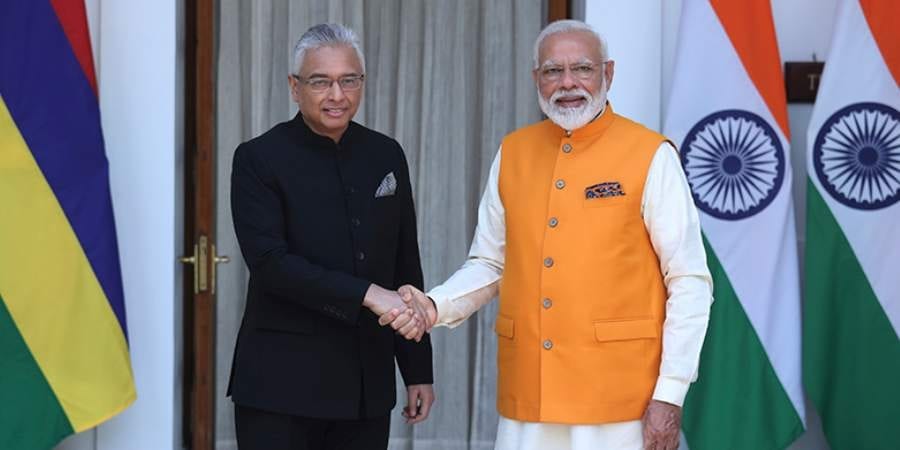 Following the declaration of the WHO that the COVID-19 is a public health emergency, the Prime Minister set up a High Level Committee to monitor the situation and make important decisions. The High-Level Committee took the decisions to prevent foreign nationals from affected countries from entering or transit in Mauritius. Mauritius nationals and residents were quarantined in Mauritius upon arrival after March 19, 2020.

On March 18, three cases were detected in Mauritius and the government announced that all schools and universities would be shut until further notice. Amidst a surge in fresh cases, the PM, on March 19, announced nationwide confinement measures to be effective for a duration of two weeks in response to COVID-19 pandemic. On March 24, the PM announced that the country would be under complete lockdown until March 31 with only essential services being open but decided subsequently that the sanitary curfew will be extended till April 15.

A National Communication Committee was set up to provide daily details about the COVID-19 situation. A Quarantine Bill was passed at the National Assembly to make, amongst others, the wearing of masks compulsory.

As of July 1, all schools have been opened. Closure of borders is still being maintained. Most of the activities have resumed as of June 15. No new cases have been detected in Mauritius since April 26 through the local transmission. Few new cases which were reported were from passengers who were repatriated to Mauritius. They were all admitted and treated in quarantine centres upon their arrival.

Being a primarily tourism centred economy, the pandemic’s impact might have been particularly hard. What are the plans for the revival of the sector?

Tourism is one of the most impacted industries in the world. According to the United Nations World Tourism Organization (UNWTO), International tourism was down by 22 percent in the first quarter of the year and could decline by 60-80 percent over the whole year. This would entail a major blow to employment with millions of jobs at risk in one of the most labour-intensive sectors of the economy.

Mauritius is, unfortunately, not an exception. The tourism sector contributes nearly to eight percent of the national GDP. Since mid-March, the government has had to take bold decisions to close all borders with a view to protecting its population. In doing so, the Tourism Industry has been put to a halt.

With the government’s announcement to lift all restrictions, the tourism sector needs to adapt to its new environment in a concerted and professional manner. During the times of crisis, the government has introduced a series of schemes and aids with the aim to alleviating the economic impact while at the same time preserving employment. Some of the government’s actions include a Wage Assistance Scheme to protect employment and a Self-Employed Assistant Scheme to extend support to the sector.

A sum of Rs 80 billion will be invested through the Mauritius Investment Corporation Ltd (MIC) to support important and viable companies in Mauritius, which are financially distressed as a result of the COVID-19 pandemic. The government injected Rs 20 billion to support SMEs and vulnerable households. The Development Bank of Mauritius will invest Rs 10 billion in the SME Sector to sustain small and medium firms at a concessional rate of 0.5 percent per annum. Moreover, an amount worth Rs 15 billion has been earmarked to provide an exceptional minimum monthly support of Rs 5,100 to each beneficiary. The government is also reviewing a regulatory framework for a new tourism branding strategy.

With a view to building resilience for the tourism sector, the government is implementing sanitary measures as endorsed by the WTTC. Moreover, through a project financed by the EU, many sectors of the Tour Operators’ Value chain are being assisted to co-create new innovative products that would have fewer negative impacts on the environment. Operators in the tourism sector are being encouraged to adopt best practices to being certified Green by certification bodies.

You have taken over very recently as the Mauritius High Commissioner to India. What would be your key priorities?

The relationship between Mauritius and India are anchored in kinship, historical and cultural affinities. We have long-standing cooperation in a wide range of sectors including culture, education, hydrography, trade, investment, defence and security. My mission is to further consolidate and strengthen these existing relationships and explore new avenues of cooperation taking into consideration the challenges and opportunities in a post COVID era, which would be of mutual benefit for both countries.

Some of my key priorities include the early conclusion of the Comprehensive Economic Cooperation and Partnership Agreement (CECPA) for the mutual benefit of both Mauritius and India in the area of trade in goods and services. Such an agreement will help to cut or eliminate duties on the majority of goods besides liberalising norms to promote services trade and boost investment.

Another area where I would be focusing on is in the field of AYUSH. I commend India for its initiative in promoting AYUSH as an alternative and preventive medicine. Mauritius is very much inspired by India and is looking forward to becoming a regional hub to promote AYUSH. The government has even earmarked a plot of land for the AYUSH project.

Mauritius and India already signed a Memorandum of Understanding (MoU) on Cooperation in the field of Traditional Systems of Medicine and Homeopathy in 2015 during a highlevel visit of Narendra Modi, Hon’ble Prime Minister of the Republic of India to Mauritius. I look forward towards the implementation of the MoU and learning from the Indian experience. I will also lay emphasis on technical assistance programmes in the field of agriculture and health.

Give us an overview of Mauritius-India relations.

The bond between Mauritius and India goes back to more than 180 years when our forefathers embarked on an unknown adventure when they left their native place in India. Since then, Mauritian of Indian descent has maintained the traditions, languages, culture and values that have been inculcated from generation to generation. The Apravasi Ghat, the place where the Indian landed in Mauritius is a World Heritage Site.

Moreover, over the years, the ties have expanded in different areas including education, healthcare, science and technology, investment, trade etc. Both countries are also collaborating extensively in maritime security. MoUs have been signed between the two countries in many of these areas. Mauritius has been the top source of foreign direct investment in India for many years.

India is very much present in the Mauritian economy. For example, the development of the ICT industry in Mauritius was kickstarted with the support of India when the first Cyber City was built. Today more than 100 Indian companies have set up and are successfully operating in Mauritius. The latest landmark project that we are setting up is the Metro Express with the support of India. This major project will modernize and transform the infrastructure landscape of our country. Only last July, Hon’ble Prime Minister Shri Narendra Modi and Hon. Pravind Kumar Jugnauth, Prime Minister of the Republic of Mauritius inaugurated the new Supreme Court building of Mauritius with the assistance of India.

Mauritius and India share a common cultural heritage. Their ancient system of naturopathy, AYUSH and alternative Medicare system can be an effective remedy, particularly in these times. What is your opinion on this?

AYUSH – the combined Indian system of medicine is deeply rooted in Mauritian culture, Ayurveda, Homeopathy and Yoga are well-practised in Mauritius. Mauritius is a privileged country where Ayurveda is integrated with the public health sector.

Ayurveda has a holistic approach in both management of health and treating the diseased condition. Though at present no specific treatment has yet been established for COVID-19, Ayurveda presents its most effective and time tested fundamentals of preventive aspects to deal with such conditions which is clearly described as “Janopadhwans’ epidemic diseases.

Not the least, the link between psychological distress and immune responses to such infectious conditions can also be dealt with Ayurvedic concepts of “Satvavajaya’ counselling, Yoga and “Swasthavritta’ (social hygiene).

Both sanitary measures and the concept of social distancing have been well established in our daily and seasonal regimen. Further, in such condition, there is a need to step ahead to develop an integrative treatment protocol incorporating Ayurveda for the best outcomes in the management of not only COVID-19 but many other such infectious diseases which may further challenge humanity.

Pandemic like COVID-19 has become the biggest challenge where the whole community is suffering.

We should look forward to bringing standards for modern medicine and traditional medicine in integration. In addition, we should bring the value of Yoga and Ayurveda which is evidencebased, whereby Ayurveda should be imbibed as a system rather than a drug for treatment purposes, for the welfare of humanity. Through Ayurveda, way of life, physical, mental and emotional health can be improved in the present pandemic.