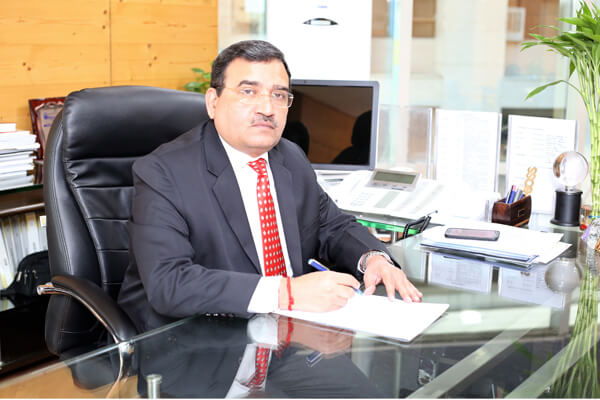 As the economic drop complexes due to the onset of COVID-19 pandemic, the Government of India spots the potential to bring back the economy on its feet in the public sector. Hence, the Centre looks forward to PSUs to aid economic recovery. Highlighting the agenda, Elets Techomedia organised National PSU Summit virtually. SK Choudhary, Chairman and Managing Director, IRCON International Limited.

Mr Choudhary started off with a briefing on IRCON International Limited. He said, “IRCON is a major infrastructure company. We are involved in railways, highways, railway signalling, housing, etc. IRCON does almost every infrastructure-related works in India and abroad.”

Talking about the management of staff and workers during the COVID times, he said, “Our projects are big most of the times, especially while working for railways the railway lines can be 100 km long. So, we have cameras placed in places where our staff and workers are staying.”

Adding on he mentioned, “In the beginning, when the COVID-19 pandemic hit the country, there was a bit of chaos and confusions on how to operate. However, within a span of 10-15 days it was clear what should be done and proper standard operating procedures (SOPs) were issued. Moreover, it was ensured that all the precautions advised by the Ministry of Health and Family Welfare are being adhered to.”

In order to ensure that all the precautions are being followed, PPE kits, sanitisers, gloves, face masks, etc. were procured and distributed to the staff and the workers at the sites. Hence initially, there was no such problem that occurred while coping up with the changes, added Mr Choudhary.

Further, mentioning challenges faced by IRCON with time, Mr Choudhary said, “At the time when the revere migration took place and the people were moving back to their home towns, IRCON was able to cope with the changes and there was no significant issue that surfaced. However, following the unlock, the workers again started migrating towards cities and this led to the rise in the number of COVID cases in our camps.” While working on projects, there are nearly 3000 to 4000 people (including staff and workers) and in such a scenario it was common news to hear that 20 people were found positive at some site, five were found positive at some other site, and so on. However, a solution that was figured out was quarantining people. So, many of the workers were quarantined and for this specific building were provided, he added.

“However, it is unfortunate to say that the situation is not good enough as of yet”, mentioned Mr Choudhary.

Talking about measures taken to improve the situation, he said, “IRCON resumed working in the month of May and during April an May we had spiritual workshops and motivational workshops through video conferences to keep the staff and workers engaged. Meanwhile, we also delivered various lectures to the staff members. On every second or third day, video meetings were organised on the status of projects and the staff was asked to share issues if they were facing any issues. Such efforts led to a feeling of togetherness among the staff members and did not let anyone feel alone at the time of lockdowns.

Besides this, no pay cuts were done. Even the people who have gone back to their home towns were paid full salaries. Also, the salaries were paid to the contractual workers, added Mr Choudhary. He further added that the company also took various corporate social responsibility (CSR) initiatives and distributed food to the poor and the needy.

While resting his speech, Mr Choudhary concluded on a note mentioning that its fortunate that no major incident has happened in IRCON and the company is taking all the possible safety measure and precautions to keep the staff and the workers safe.