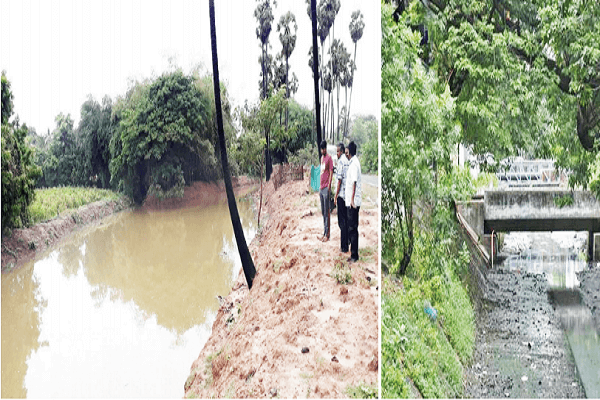 Public participation is the key to protect the environment, the district administration went on a massive public drive and instituted critical interventions for water conservation and groundwater recharge by launching ‘Nam Neer (Our Water)’ Programme on July 3, 2019. The main objective was to reconnect people with their traditional repositories of water, particularly the ponds, tanks and wells, which had fallen into neglect and disuse, and revive groundwater levels, writes A Vikranth Raja, District Collector, Karaikal, for Elets News Network (ENN).

Around this time two years back, the Government of Puducherry had declared Karaikal as drought affected. With the water table getting disrupted due to climate change as well as human activities, several districts of Cauvery Delta are facing water related issues in the recent years.

Karaikal is situated on the east coast of India, between 10o 49’ and 11o 01’ N, and 79o 43’ and 79o 52’ E in the deltaic region of the Cauvery. Surface water systems have sustained the Karaikal agriculture besides acting as a bulwark against salt water intrusion. There were around 549 ponds / tanks as per records within the total area of 157 sq. kms area (Source: PWD, Revenue Departments). 40 percent of these water-bodies were in various states of disrepair / encroachments etc. The wells, which were once the source of potable water are either lost or are in very bad condition.

Karaikal has an annual average rainfall of about 1,360 mm (Source: CGWB / IMD); 68 percent of which occurs during October to December. The south-west monsoon contributes less than 20 percent of the annual. During the recent years, the North-East Monsoon was irregular and below-normal rainfall recorded during the years, 2012 (Drought), 2013, 2016 (Drought) and 2018.

Non-receipt of Cauvery water on time and erratic rainfall is affecting the area under cultivation and majority in the region could raise only single crop. There is also increased dependency on the ground water. A significant decrease in water levels ranging from two metres to seven metres in various locations of the district was noticed during last few years (Source: CGWB, Puducherry). “Gaja” cyclone (2018) uprooted over 5,000 trees reducing the green cover.

The key to the well-being of our district’s water resources lies in the longforgotten indigenous water conservation systems. When people depended on the pond, they took care of it. When the wells came up, they forgot about the ponds. When hand pumps came, wells were neglected. When piped water supply arrived, all those hand pumps saw neglect. Falling groundwater levels and dying water bodies are a consequence of neglect.

Since, public participation is the key to protect the environment, the district administration went on a massive public drive and instituted critical interventions for water conservation and groundwater recharge by launching ‘Nam Neer (Our Water)’ Programme on July 3, 2019. The main objective was to reconnect people with their traditional repositories of water, particularly the ponds, tanks and wells, which had fallen into neglect and disuse, and revive groundwater levels.

The water conservation effort saw a mass awareness campaign through NSS, SHGs, Nehru Yuva Kendra and Social media. Gram Sabha meetings were conducted in all communes and the proposed plans were discussed with the villagers. Farmers were motivated to co-operate. All India Radio, print and television media, social media, public functions and school and college events were used to address the issue on daily basis.

The District Administration sought to build and develop a funding and permitting framework to facilitate the “voluntary adoption” and rejuvenation of ponds and canals and run it as Partnership in Restoration (PIR) campaign. The role of District Administration was limited to provide technical support and issue of No Objection or clearance. Identification to contractors for execution of works with regard to the rejuvenation of ponds and payments to those contractors were made by the adopting agencies/departments/ individuals/groups by themselves. Employee Social Responsibility (ESR) and Temple Social Responsibility (TSR) are two new interventions.

Under ESR, an appeal was made to all the Government Departments to adopt a pond for rejuvenation through voluntary contributions. Users / Consumers aver empathy but display a sizeable knowledge–action gap between professed awareness of water scarcity and actual action. Drawing critical insights from behavioural economics ‘Nudges’ was employed for Nam Neer Programme.

The First appeal for Nam Neer Programme was delivered by the District Collector requesting the Employees of various Departments in Karaikal District to voluntarily contribute to rejuvenate any water body of their choice. The lines in the appeal, “The Officers and staff of Collectorate are voluntarily adopting Vathi Kulam, Keezhakasakudy for rejuvenation” delivered the subtle nudging effect and the much needed impeteus for the programme and soon various other government departments, merchant communities, commercial establishments, community organisation followed-suit. Other partnerships involved Corporate Social Responsibility (CSR), Citizen / Community Social Responsibility and convergence of MGNREGA. Elected representatives, volunteers and residents provided additional value to the movement. For the Intense Afforestation programme, the applicants of Cracker Sale Licences and Petrol Bunk owners were requested to plant tree saplings in schools, colleges and public places which delivered the nudging effect.

The water conservation effort saw a mass awareness campaign through NSS, SHGs, Nehru Yuva Kendra and Social media. Gram Sabha meetings were conducted in all communes and the proposed plans were discussed with the villagers.

Under ESR, the departments were requested to plant trees alongside the ponds. Rain water structures in all government buildings and private industries, individual houses are being ensured.

Through CSR support, as many as 20 ponds and 80.91 km stretch of major canals were desilted. This facilitated the easy flow of water from the Cauvery River to agricultural fields. Under Intense Afforestation Programme, so far 24,700 tree saplings have been planted. The approximate funds mobilised under ESR for pond rejuvenation is Rs 12 lakh and canal rejuvenation under CSR is around Rs 55 lakh.

Nam Neer has helped in increasing the storage capacity of tanks and other water bodies. The Water level has increased by an average of three metres (10 feet) in various locations of Karaikal when compared to the similar period during previous years (Source: CGWB, Puducherry).

This will recharge the ground water aquifers to great extent. It is bound to help in making water available and accessible to small and medium farmers in particular and benefit other farmers as well. The intervention will help in increasing the water retention capacity. Increased water table leads to better water quality in long run and increased agricultural productivity this season. It also provides alternate opportunities like fishing and provides grazing area for livestock.

Accessible source of information on various water bodies in Karaikal District, extent and ownership details is documented. This remains a valuable resource, particularly for addressing long-term issues. Large scale plantations of trees has the potential to sequester maximum amount of carbon and also to increase green cover, so that the people derive more tangible (e.g. timber, fodder, etc.) benefits in the long run; combat climate change; restore the ecological diversity; help in pollution control; addresses soil fertility and soil erosion; and enhances the micro-climate around the ponds.

The ‘Nam Neer’ initiative has a very positive impact and brought accolades from Hon’ble President of India, Hon’ble Lieutenant Governor of Puducherry, Hon’ble Chief Minister of Puducherry and his Council of Ministers. Tarun Bharat Sangh, Alwar, Rajasthan conferred the Environmental Protector Award 2020 recognising the flourishing efforts of Nam Neer programme. There is a belief in the ability of the administration to address the concerns of the public. More importantly, people have taken ownership of these initiatives because they understand the urgent need for a permanent solution to avert any water crisis.