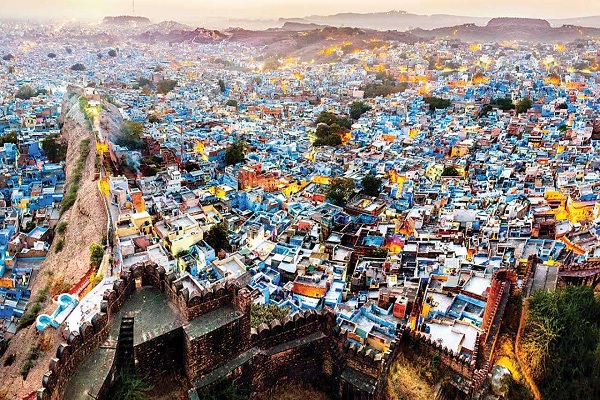 Jodhpur, the second-largest city of Rajasthan has borne a rich historic legacy and now leveraging the modern amenities to experience urban transformation. The city, which is one of the famous tourist destinations in India, is also innovating towards the existing and untapped resources to evolve further. Popularly known as Sun City, Jodhpur, over the years is undergoing multiple facets of changes towards being a resilient and sustainable city; write Kartik Sharma and Sreetama Datta of Elets News Network (ENN).

Jodhpur, the second-largest city of Rajasthan bears a rich historic legacy and exudes an aroma of royalty. For any city, the manifestation of development lies in progressing towards development whilst maintaining its heritage.

The second metropolitan city of the state, Jodhpur is progressing towards a rapid, yet gradual urban transformation. The civic bodies of the city, Jodhpur Development Authority (JoDA) and Jodhpur Municipal Corporation are on the move to make the city more liveable and resilient not just for the citizens, but for the tourists as well. The primary focus areas for the civic bodies are in the aspects of infrastructure, commercial projects, residential design & construction, and unauthorised colonies.

What makes Jodhpur different from other cities

The walled city of Jodhpur has a distinguishing feature, which has earned it the nickname of Blue City. Majority of the houses are painted blue to resist the massive heat. The city is also popularly known as the Sun City owing to its exposure to the sun. It is indeed a challenge for the civic bodies to give a facelift to a historic city without compromising the original virtues. However, the city authorities are aiming to bring a holistic development towards building a smart and resilient urban ecosystem.

What are the focus areas of Jodhpur’s urban architects? Let’s find out.

WASTE MANAGEMENT – A MOVE TOWARDS CLEANER AND GREENER JODHPUR

“The walled city of Jodhpur has a distinguishing feature, which has earned it the nickname of Blue City. Majority of the houses are painted blue to resist the massive heat. The city is also popularly known as the Sun City owing to its exposure to the sun.”

Adding to the waste management measures taken by JMC, Ojha says, “Jodhpur Municipal Corporation is enabling door to door garbage collection, and separate system of collecting garbage to fertilizer at hotels, restaurants, hospital and multi-storied buildings. Separate equipments are installed at the spots.”

Being a water-scarce state, Rajasthan is putting an extra foot forward towards conserving, recycling and reusing water. According to Ajitabh Sharma, Secretary to Chief Minister and Chairman, Rajasthan Renewable Energy Corporation Ltd, the state is developing construction projects like big dams for water storage. Apart from that, there are several schemes in the pipeline for water management and drinking water scheme.

Talking about the state’s vision on the water management policies and prospects, Sharma states, “To ensure efficient water usage, we have to educate people more. For that, we have to come out with water harvesting structures. We have to think about rainwater harvesting structures in rural as well as urban areas. These are some ways through which we are trying to deal with the problem of water scarcity.

Ensuring Safety and Security for Citizens and Tourists Alike

In a bid to provide safety net across the residents of Jodhpur, as well as the tourists, Jodhpur Police is taking multiple actions such as Crime and Criminal Tracking Network and Systems (CCTNS), Hotspot Analysis, Cyber Cell and Tourist Police among others. According to Prafulla Kumar, Commissioner of Police, Jodhpur, CCTNS has been implemented by Jodhpur Police and it allows all the police stations to access crucial criminal records and information. Through the data analysis, it becomes easier for Police force across the state to map crime and criminals.

The other plans in the pipeline include setting up of Cybercrime Cell and Tourist Police Station in Jaipur. “We have roped in Hotel Associations and Guide Associations as well. We are planning to launch an information card as well which will be a handy tool for visitors to contact the necessary departments and places in the city. We are making efforts to outreach the people visiting the Sun City with increased visibility,” says Kumar.

Technology, especially in terms of IT and ICT are deployed in a big way across the civic bodies of Jodhpur, such as JoDA and JMC. Talking about the multiple technological innovations adopted by JoDA, Gaurav Agrawal, former Commissioner of JoDA says, “IT and e-governance are a very important part of governing things well, improving office management, and delivering better services to consumers.” File Tracking System (FTS): Within this system, all the files submitted at JoDA (metadata part) are uploaded online on FTS and then the file movements are recorded into it. When a file moves from person A to person B, it is recorded in the system and a pendency report is generated.

Single Window Service Delivery System: Within this single window system, seven to eight kinds of services are offered. Within this, anybody who puts in an application eventually finds its way to a file. Besides, JoDA has seeded all the applications that are received on a single window on the FTS. So that the applicants get a single-window ID and through the website, and can track the entire movement of their application. Going Paperless: JoDA is endeavouring to make the entire office paperless, by passing a regulation indicating entry or circulation of papers illegal inside the premises. “All our files would be uploaded online and everything would be visible to the concerned applicant. This would bring the highest levels of transparency and accountability,” says Agrawal.

Sharing the significance of implementing technology in the regular functioning of JoDA, Ratnoo, the present Commissioner says, “IT and eGovernance can be leveraged to make the entire operations in JoDA more transparent and smooth. I strongly believe that we at JoDA must embrace advanced technologies to make everyone’s life easier. We will surely keep looking for innovations which can streamline the functioning of JoDA.”

Stating the technology initiatives implemented by JMC, the Mayor states, “To ease the services to the city of Jodhpur, Municipal Corporation has been providing online services like birth and death certificate, trade license, etc. The Single window system is operated by Municipal Corporation of Jodhpur.” He also adds, “All Municipal services like issue of lease deed, name transfer, sales permission, Land use charge, NOC for bank loan, complaints regarding road lights, sewerage cleanliness, dead animal encroachments, etc. are done online.”

In a bid to provide safety net across the residents of Jodhpur, as well as the tourists, Jodhpur Police is taking multiple actions such as Crime and Criminal Tracking Network and Systems (CCTNS), Hotspot Analysis, Cyber Cell and Tourist Police among others.

To ease the traffic congestion of the city, the urban planners are aiming to utilise ITMS in a big way. As the priority for the city administrators is to ensure a smooth flow of traffic along with the safety of the drivers and pedestrians alike, deploying ITMS is one of the best solutions planned to ensure the same.

Sharing the current status of the ITMS, Commissioner of Police Prafulla Kumar says, “We have installed CCTV camera across the city. We are seeking the help of IIT Jodhpur for meaningful manipulation and analysis of CCTV data. ITMS, I would say, is a significant project. We are in the process of sending proposals to the Government to implement ITMS mechanisms in the city as well.”

The JoDA has the following projects in the pipeline which are likely to be executed in the next five years. Road Networks: An elevated road from Patwar circle to Akhaliya circle of about six-and-a-quarter kilometres long is on the pipeline. According to JoDA, tender for the preparation of Detailed Project Report (DPR) for this is under process. Apart from this, there are several other road construction and strengthening projects undertaken by JoDA.

Drain Construction: Construction of a drain and a 100 feet road from Saran Nagar to Banar bypass. This will be around nine-and-a-half kilometres in length. Jojari Riverfront Development Project: Development work of Jojari riverfront from Banar to Salawas is in progress.

Fortifying Sports Infrastructure: The popular sports stadiums of the city, Barkatullah Khan stadium and Gaushala stadium will get massive facelifts, as planned by JoDA.

Jodhpur – Upping the Game of Tourism

The Blue City is topping the chart as a tourism paradise with attractions like Mehrangarh Fort, Umaid Bhawan, Umaid Garden, Fort Mandore, Kaylana Lake and Balsamad Lake to name a few. The abundance of historic flavour across the city with forts and palaces has attracted tourists across the world. Notably, multiple movies have been shot across the city including Christopher Nolan’s The Dark Knight Rises.

In a bid to improve the tourist footfall in the Sun City, the Department of Tourism of Rajasthan Government has signed a Memorandum of Understanding (MoU) with the UNESCO to promote the heritage and culture of Western Rajasthan.

“As we know, there are local art, music and handicraft abundance in and around Jodhpur. This agreement will help us promote this and generate some jobs as well,” states Ratnoo. Like an ideal tourist destination, Jodhpur is not just basking in the historic glory but is constantly manoeuvring towards making the major attractions in and around the city more tourist-friendly.

Untapped regions of Jodhpur are being utilised to develop as tourist attractions and to ensure more footfalls. These include jogging and cycling tracks around the Kaylana lake, wax museum around Surpura Dam, park and musical fountain around Ganesh temple, Umaid Garden and building an amphitheatre in Ashok Udyan to name a few. The city administrators, as well as the State Government, are optimistic that within the next five years, the number of tourist arrivals would reach almost double the numbers with these endeavours and the overall urban transformation.