India currently has less than 1000 m3 of renewable freshwater per person annually, making it one of the most water-stressed countries in the world. With India’s economy accelerating to become the world’s third largest by 2030, there is increasing pressure on the country’s natural resources, groundwater in particular. Even as demand for water by cities, agriculture and industry has grown, the amount of freshwater resources available has stayed the same.

We need solutions that address this challenge while meeting our commitments to the SDG 6.4 target to “substantially increase water-use efficiency across all sectors and ensure sustainable withdrawals and supply of freshwater to address water scarcity and substantially reduce the number of people suffering from water scarcity”‘.

There is an urgent need to improve the groundwater situation in urban areas, particularly small towns. Groundwater depletion poses a real threat to both drinking water security and urban growth.

In smaller towns, depletion may be driven by irrigation in surrounding agricultural areas. While the towns may not have any control over agricultural pumping, they nonetheless have to bear the cost in terms of urban drinking water security and municipal revenues as they have to “chase the water table”. Not only do municipalities in water-stressed regions have to repeatedly invest capital in replacing defunct borewells, but just a single line item – the cost of electricity to pump drinking water – often uses up most of the budget for water and sanitation, making it difficult to sustain O&M of piped water schemes.

We need to bring aquifers back into balance, both by boosting recharge and by reducing groundwater abstraction.

This is a monumental task. India’s economy is still growing rapidly, which means demand for groundwater is increasing, not decreasing. Further, in many water-stressed parts of India, every drop of water is already being used. Simply harvesting more rain often just means less water flows downstream.

So, what is to be done? One of the biggest challenges is that urban groundwater is nobody’s responsibility. There are no real revenue streams associated with regulating or managing groundwater and this needs to change.

We need to develop a “groundwater economy” that aligns data, technology and economic incentives.

The first challenge is that we don’t have enough data on groundwater use. If we don’t even know how much we are abstracting, how can we manage aquifers? Self-supply by households and industries often goes under-reported. Programmes involving voluntary metering and reporting of borewell water use have not really succeeded.

We need to incentivise borewell owners to report. One approach that has worked in the piped supply context, is to bill users for groundwater at a high flat rate. This would create an incentive for them to install meters to demonstrate a lower level of consumption and thus reduce their bill. Another approach would be to introduce incentives for net metering of groundwater (similar to solar), where large apartment complexes and commercial establishments would be required to meter groundwater pumping, but offset their bill through rainwater harvesting.

Incentivise corporations to adopt technologies to reduce water use

The second challenge is scaling existing efforts to reduce groundwater use. Many corporations are already addressing water-stress, through ‘within the fence’ and ‘outside the fence’ efforts. Within-the fence measures typically involve improving water-use efficiency and recycling within industrial premises. Outside-the-fence programmes typically involve watershed management projects in the immediate vicinity of the facility. These practices are already being adopted Illustration by SarayuNeelakantan and Aparna Nambiar, CSEI-ATREE, Bangalore by large multinational corporations that have made global commitments, e.g., to the United Nations Global Impact CEO Water Mandate. But there is an opportunity to promote learning and scaling of these ideas through industry associations.

The third challenge is figuring out where to get water to recharge aquifers in towns. Beyond rooftop rainwater harvesting in public buildings, water to boost recharge can only come from two sources — flood water and wastewater. Municipalities could invest in Flood Managed Aquifer Recharge or Flood MAR, because urban floods generate large volumes of water in very short time periods. In contrast, groundwater recharge, particularly into deeper borewells, tends to occur slowly. Therefore, the key to harvesting floodwater is designing a space to temporarily store flood water allowing the water to percolate to deeper layers over the period of a few weeks. The land itself can serve a dual purpose (e.g. public playgrounds) in the dry months, but it must be designated as a bio retention basin to treat and store urban storm runoff.

Additionally, towns can make investments in wastewater treatment plants to treat sewage for reuse locally or within the watershed. If treated to high enough standards, the water could be released into local water bodies or directly injected to recharge groundwater. 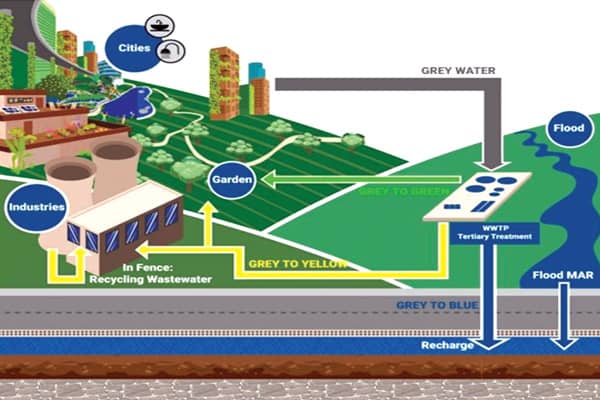 Create mechanisms for collective investment
While efforts by individual households and commercial/industrial establishments are much needed, they can only go so far. Ultimately, we need good public infrastructure for stormwater and wastewater treatment because there are inherent economies of scale in centralised infrastructure. The biggest bottleneck many small towns in water-stressed regions face is that they are stuck in a “low-level equilibrium”. The surface water bodies are contaminated with raw sewage. As a result, ULBs must chase the water table spending ever more on pumping from deep aquifers, leaving them even lesser funds for operations and maintenance

But public infrastructure projects like sewage treatment plants and bioretention basins, are expensive. One possible solution to this gridlock would be through creating mechanisms for collective investment. i.e., allowing firms to claim water credits (similar to carbon credits) to offset their groundwater pumping by directing CSR funds towards capital- intensive public projects. This would create a mechanism to unlock financing for wastewater reclamation and Flood MAR. Companies in turn, could claim net water positivity by purchasing or selling water credits. With proper enforcement, this could address the twin problems of urban water body pollution and groundwater stress.

In summary, solving India’s urban groundwater crisis through improving water-use efficiency to address SDG 6.4 is possible. But we need to create a groundwater economy. To achieve this, we need better data. We also need to innovate technology solutions that work in private and public contexts. Finally, we need and mechanism to unlock financing to ensure scale.

Dr. Veena Srinivasan (veena.srinivasan@atree.org) is a Senior Fellow at Ashoka Trust for Research in Ecology and the Environment (ATREE), where she is the Director of the Centre for Social and Environmental Innovation (CSEI).