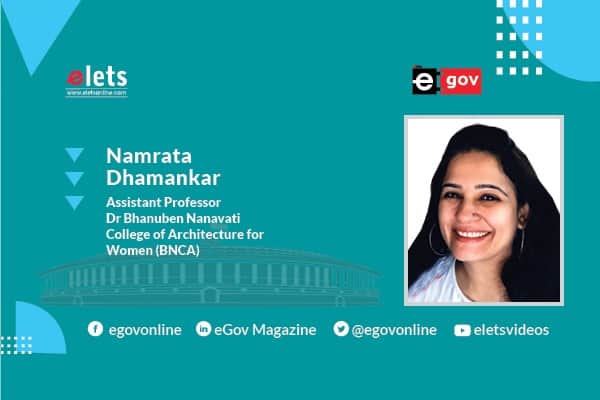 Cities are at the forefront of innovation, knowledge, and prospects. They attract huge populations with their innumerable possibilities and opportunities. With over 50 per cent of the population living in urban centres, cities across are also faced with a myriad of problems. Some with crippling infrastructure, others with a social or political crisis and some with critical environmental problems. However cities able to seek a balance with social, environmental and economic aspects are able to sustain and grow in the right direction, writes Namrata Dhamankar, Assistant Professor, Dr Bhanuben Nanavati College of Architecture for Women (BNCA).

A clear vision and planning is the only key to the resilient and sustainable growth of cities. As individuals, as communities, as societies and as a nation, we have witnessed innumerable situations that have tested our resilience. Be it the day to day life stresses, socio-economic issues or wars against other countries that have shaken our foundations and placed us in unfavourable, unfortunate and arduous circumstances, we have always shown herculean strength and unfathomable resilience.

As one of the UN’s Sustainable Development Goals, city resilience is now accepted as a critical urban agenda. But how can we make resilience tangible and practical for cities? How can resilience be applied by cities to build sound strategies and prioritise investments? Pioneering approaches and new competencies are required in order to adopt resilience as a positive urban development agenda. The City Resilience Index – (CRI), a tool developed by the Rockefeller Foundation was a new way to understand and champion resilience in cities. The CRI is used as a planning and decision-making tool and is drawn on insights from cities across the world.

The CRI and various other frameworks and scenario building tools that are developed and used by stakeholders across to assess cities and their path to resilience are relevant, robust and globally applicable. These tools help in systematically identifying weaknesses that impacts the city as sudden shocks and chronic stresses. They provide opportunities to customise solutions for the resilience of the communities, places and cities. As widely defined, Urban resilience is the capacity of cities to function, so that the people living and working in cities particularly the poor and vulnerable survive and thrive no matter what chronic stresses or acute shocks they encounter. Impacts on climate change can be seen on urban ecology, food supply and price, increased number of dry days, having continuous stress on the water system, an invisible creeping disaster like urban drought, significant impacts in terms of health in urban areas due to heatwaves, vector-borne diseases, etc. all this ultimately leading to impacts on the urban and regional economy. Shocks like the increased number and intensity of extreme weather events such as flooding, cyclones and typhoons: visible disasters all contribute to urban resilience. Resilience and adaptation are largely interlinked. Resilient systems are stable, yet flexible foundations that people require in order to shift strategies and adapt as conditions change. Adaptation is often discrete actions such as building flood- protection systems or mangrove restoration with discrete beginnings and ends developed to address specific vulnerabilities or problems. Resilience is an ongoing, iterative process and recognises that vulnerability and climate risk are constantly evolving, as our cities and communities and the systems, agents and institutions within them evolve and involve. 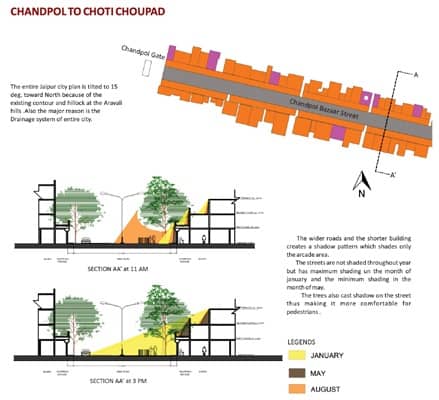 With this background and context, the Department of Environmental Architecture and Planning, Dr Bhanuben Nanavati College of Architecture for Women, set forth Climate Change and Resilience as the core thematic for the next decade of action for their Environmental Planning studio. Since 2016 the studio has focused on multiple cities Jaipur, Wayanad, Chennai and Pune. Through these identified cities of study, we have tackled various issues along with their identified shocks and stresses through the guided methodology of resilience set forth by various global frameworks.

Every city has something to learn from and something waiting to be explored, every city gave us an opportunity to look at climate vulnerability and possible solutions for resilience.

‘Prastara’ demonstrated the possibility of new peri-urban areas in the city of Jaipur to take shape to enhance the overall quality of the built environment. The neighbourhood of Pratap Nagar, a peri-urban development was studied for its current pattern of development. A detailed analysis was done of what is going wrong in the current development pattern and how the city can adopt strategies to cater to various changing climatic extremes. An extensive exercise of scenario generation with 3 key thematics was undertaken to create a holistic approach to climate-responsive neighbourhood development. The study also undertook a precedent study to understand the already existing built heritage of the old city and key learnings from there acted as a precursor to the scenario building exercise at Pratap Nagar. The overall adaptation strategy plan for Pratap Nagar included creating built spaces that give an overall comfortable thermal outdoor and indoor conditions and good ventilation, preserving and incorporating more green spaces, compact and more vertical built mass to reduce the building footprint. This was achieved with three main approaches and scenarios getting developed:
Approach 1: Urban ventilation & pedestrian
Approach 2: Development paradigm for urban housing
Approach 2: Thermal comfort through a minimal footprint

We looked at Wayanad, a small yet significant region in the state known for its picturesque mist–clad hill stations, sprawling, spice plantations, luxuriant forest and rich cultural tradition. Wayanad is slowly inclining towards becoming one of the fastest- growing tourism destinations in Kerala. Currently, the region is an agrarian society with the primary income of livelihood and income being agriculture. The towns of Sulthan- Bathery, Mananthawady and Kalpetta were analysed, rated to derive issues from the sectors – Infrastructure, Health & Environment, Education, and Economy.

The entire field survey was done to understand the critical areas that need to be worked on to further develop & build project proposals. Wayanad has its own set of challenges however there are opportunities to bridge the gap with respect to connectivity, economic generation, and increasing tourist influx. Some of the identified issues were Wayanad being an agrarian community produces tonnes of raw material which is then exported for further processing thereby not giving farmers the good value of their produce. With the tourist inflow increasing, a proper tourism management plan needs to be in place for ecological restoration and nature conservation which Wayanad is known for. 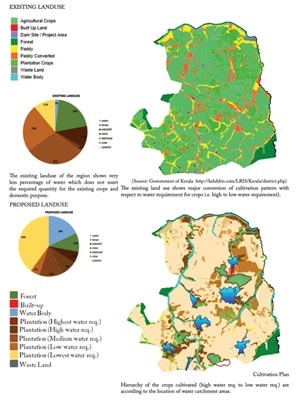 The maximum harm on the region has come through unchecked mining activities which have left the areas bare and strict implementation measures and revival plans for these areas were required. Wayanad also faces extreme drought conditions during the summers in spite of the good monsoon prevailing in the region. The studio, therefore, made proposals and explored solutions to help the region grow economically while keeping the pristine environment safe. Proposal 1: Water scarcity in Wayanad
Proposal 2: Self-sustaining agro- processing units
Proposal 3: Tribal housing redefined
Proposal 4: Green routes for tourism
Proposal 5: Redevelopment of abandoned quarry site.

Chennai a city of multitudes, faces perineal water problems. Sometimes floods and cyclones, while other times the city is trying to quench its thirst due to drought conditions. This ironically opposing state of affairs poses a complex situation. Intervening this very situation by building Chennai’s resilience towards water became the central theme for our next studio in 2018.

The city of Chennai too went through the exercise of identifying key shocks and stresses with respect to water as a central theme. Further to enhance Chennai’s water resilience four areas where environmental and urban interventions were to be implemented through strategic planning and rejuvenation modules were identified. 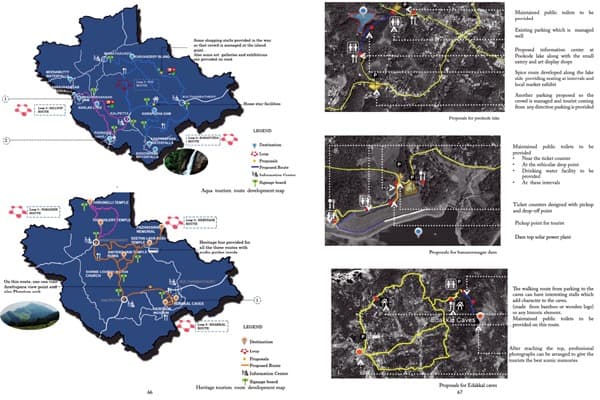 Over the years we have worked extensively on Pune city with various interventions and proposals being prepared. We have looked at core city development with the lens of heritage sustainability, developed a tourism development plan for Pune and also looked at the interventions in the city along the river Mutha that divides the old city from the new. The recent project undertaken by the students was preparing and studying the heat wave scenario for the city and proposing mitigation measures to reduce the overall urban heat island effect.

The initial study looked at the current scenario of the built and the unbuilt areas and the change and increase in the urban areas and ratios. It was very clearly seen that the urban expansion rate of Pune is around 7.5 per cent per annum. Through the study of LANDSAT images of the city since the 2000s and heat maps prepared, hot spots were identified based on the increase in land cover as well as changes in surface temperatures. The identified hotspots were then simulated for their existing microclimate status in envi-met to establish the heat island effect and severity. The study of stage 1 gave us potential areas that required immediate interventions and strategies to be adopted to reduce the heatwave scenario. The strategies that were on the forefront to combat the heatwave were creating urban micro forests and increasing street-level vegetation to create a microclimate thereby reducing the overall temperatures of the place. Other interventions included pavement and rooftop coating with high SRI paints and having pervious paving and road surfaces were suggested and proven to be effective strategies at the city level.

To conclude, these studio projects have been worked out in detail for their selected thematic of providing resilience against climate change issues. We aim to reach out to many more cities in the future year after year to provide effective and strategic proposals for cities to tackle this graving issue of climate stress.