“Uttar Pradesh, as a state, has lots of potential in terms of developing into an export hub of the nation. This is not just because of the landscape that we have but also because of the rich tradition of handicrafts,” highlighting this, Shivangi Singh, ACI, Department of Industries, Government of Uttar Pradesh.

Realising the shortfalls and the opportunities, the state government has come out with a state policy 2020-2025 which is in tune with the Foreign Trade Policy of the Government of India that has recently been launched. Initially, Centre had certain schemes, the state government had similar schemes or had contradictory points. Now all these issues have been taken care of and the new revised scheme has been launched, she added.

Further, Shivangi said that all the schemes and the assistance that the Uttar Pradesh government is providing to the exporters is available online. “So all that the exporters have to do is login into the website and you can register yourself to apply for assistance.”

Highlighting GST and its role in the policy, she said, “Another thing that the policy is going to introduce is a GST Cell for the exporters. This was one severe drawback that the exporters were facing as GST issues were very much into play and they were facing hindrances as far as exports were concerned.” The dedicated GST cell will work out the issues. Not only the manufacturing but also the services sector will be tackled and given assistance if they want to export, she added.

Shivangi said, “We are trying to work out the exporters’ database which will help the government to analyse and realise where we need to pitch in more. It will also give an edge to the other emerging exporters and give information about the potential markets where they can export.

It is a feeling that there is a gap in the export potential and export in real terms that the government needs to address. This exporter database will come in very handy to fill in this gap because now the exporters will be able to have first-hand information on the new emerging markets for their goods and seek assistance from the state government for that, Shivangi highlighted.

Further, she said that the state government has conducted a research study about the export ecosystem in Uttar Pradesh. “We have identified existing products that need more assistance in terms of expansion, better markets for existing products that are already being exported, products which are not being exported as yet but can be channelled to the existing markets. Certain products which are not yet exported but can be pushed into potential markets.” 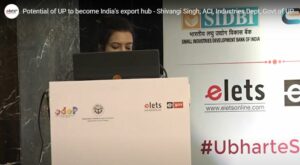 “There are 100 such products across 14 sectors that we have identified in this study… The government is trying to identify the bottlenecks and boost exports. We are in the middle of working out more focused strategies for the implementation of promotion of these products,” she pointed out.

Uttar Pradesh has also set up Export Development Centres in 10 districts of the state which is in line with the central government’s aim of enabling each district as an export hub of the country. These districts, including Varanasi and Moradabad, have a high potential of emerging as export hubs, she added.

“Uttar Pradesh has also set up Export Development Centres in 10 districts of the state which is in line with the Centre’s aim of enabling each district as an export hub of the country.”

Adding to empowering exporters at the district level, Shivangi said that all 75 districts of Uttar Pradesh, have an Export Development Committee under the chairmanship of respective District Magistrates which will address the problems of the exporters and identify the key gaps at the local level which can be escalated and addressed at the higher level.. This will help in making District Export Action Plan for each district. The identity of the district is limited to one or two products only… Besides, over 15 Common Facilitation Centres are being set up for making the districts export enabled.

Uttar Pradesh government is focussing on the skill development and capacity building of the exporters in the state. The schemes too have been modified as per the needs of the exporters. There are three main schemes – market development assistance, assistance for freight charges up to the gateway port, and air freight scheme, she highlighted.

“Uttar Pradesh government is focussing on the skill development and capacity building of the exporters in the state.”

On government assistance provided to exporters, she said, “In the Market Development Assistance scheme exporters were earlier given 60 per cent of stall charges and 50 per cent of airfare. But now the capping has been increased significantly and the amount given as assistance has gone up to Rs 3 lakh. Also, the nature of assistance has also changed. Earlier assistance was being given for physical trade fairs only. But now virtual medium will also be covered. The kind of certifications and quality control issues were earlier restricted to Indian certifications but now any certification can be sought help for.”

Earlier exporters were getting assistance for air freight only if they exported products from only two airports within UP – one in Lucknow and another in Varanasi. But now the exporters can seek assistance if they export products originating from Uttar Pradesh from any air cargo terminal across the country. The state government is constantly trying to adapt to new changes and requirements, she added.