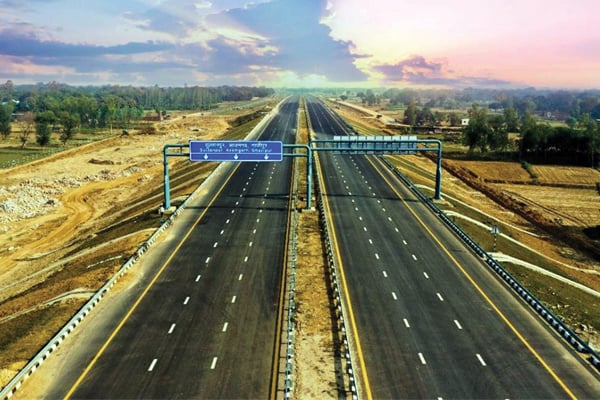 2021 was a year of big launches for Uttar Pradesh. From power projects to airports to expressways, Uttar Pradesh surely scored big in terms of development and governance. Though the projects were launched in 2021, the actual impact of these projects will be witnessed in the year 2022, writes Tarannum Manjul of Elets News Network (ENN).

Here is a look at some projects that will change the scenario for Uttar Pradesh in the year 2022:

The expressway is 341-km long and starts from Chandsarai village in Lucknow district, located on the Lucknow-Sultanpur road and concludes at the Haidaria village on National Highway 31 in Ghazipur district. Currently a six-lane wide highway, it can be expanded to eight-lane later. It establishes a direct link between the National Capital Region (NCR) and eastern Uttar Pradesh till almost the Bihar border and reduces travel time. The estimated cost of the Expressway is around Rs 22,496 crore and covers Lucknow, Barabanki, Amethi, Ayodhya, Sultanpur, Ambedkar Nagar, Azamgarh, Mau and Ghazipur districts.

One of the biggest water projects in the state, the Saryu Canal is touted to be a project that is stated to be a solution for the problem of floods in certain areas of Purvanchal by linking main and tributary canals to the barrages built on rivers Ghaghra, Saryu, Rapti, Banganga and Rohin. The barrages are called Girija, Saryu, Rapti, and Wanganga. The project will facilitate irrigation of about 15 lakh (14.04 lakh) hectares of arable land.

Initially, the project was launched in 1978 to expand irrigation capacity in Bahraich and Gonda districts and it was called Ghaghra Canal. However, in 1982-83, the scope of the project was expanded with the inclusion of nine districts of the trans-Ghaghra-Rapti- Rohini region of Purvanchal and it was renamed the Saryu Project. It was decided that along with Ghaghra, Rapti, Rohin would also be connected with the canal system. However, the project got national status in 2012 when considering the importance and utility of the project, the Centre declared it a national project and renamed it Saryu Canal National Project.

The project boasts of a canal network with a total length of 6590 km covering Saryu Main Canal, Rapti Main Canal and Gola Pump Canal, Dumariaganj Pump Canal, Ayodhya Pump Canal and Utraula Pump Canal. The Saryu Canal Project is also connected to the Irrigation Department’s national project as well as the ambitious Interlinking of Rivers Project of the Government of India. The project will see the linking of Ghaghra, Saryu, Rapti, Banganga and Rohin rivers in future, solving the annual problem of floods faced by the nine districts to a great extent.

A project that promises to boost employment in the Purvanchal region of the state. Built at the cost of Rs 8603 crore on 600 acres of land, the fertilizer factory will provide direct and indirect employment to 20,000 people while bringing happiness to scores of farmers residing in the district and the entire Purvanchal region and expanding the green cover with neem coated urea, official state government sources said.

The factory, set up and to be operated by Hindustan Urvarak and Rasayan Limited (HURL), will also ensure the availability of adequate fertilizers to Uttar Pradesh and other border states while reducing dependence on imports. HURL is a joint venture in which Coal India Limited, NTPC, Indian Oil Corporation are the lead promoters while Fertilizer Corporation of India Limited and Hindustan Fertilizer Corporation Limited are partners.

It may be mentioned here that as an MP from Gorakhpur from 1998 till March 2017, there was not a single session, when CM Yogi did not raise the issue of reopening the factory of the Fertilizer Corporation of India, which closed in 1990 due to an accident, in the parliament.

Prime Minister Narendra Modi paid attention to CM Yogi’s strong demand and laid the foundation stone for the fertilizer factory on July 22, 2016. Subsequently, CM Yogi Adityanath accelerated the construction of the factory despite the COVID pandemic.

One of the major specialities of the project is that the youth of Purvanchal constitute 30 per cent of the employees of the factory and girls outnumber boys among employees.

Another ambitious project for Uttar Pradesh, the Defence Corridor was launched by PM Modi in 2018 and has six nodes Aligarh, Agra, Kanpur, Chitrakoot, Jhansi and Lucknow. The Uttar Pradesh Expressways Industrial Development Authority (UPEIDA) is the nodal agency for the defence corridor project and the year 2021 saw PM Modi launching projects in the Jhansi node of the corridor.

The corridor node at Jhansi is said to be a centre of attraction for many large companies as well. Bharat Dynamics Ltd, a Defence Public Sector Undertaking (DPSU), is said to be setting up a plant for the propulsion system for Anti-Tank Guided Missiles at Jhansi. It will be spread over 183 acres of land in Jhansi. The facility will involve an investment of Rs 400 crore. The project is expected to provide direct employment to 150 people and indirect employment to nearly 500 people.