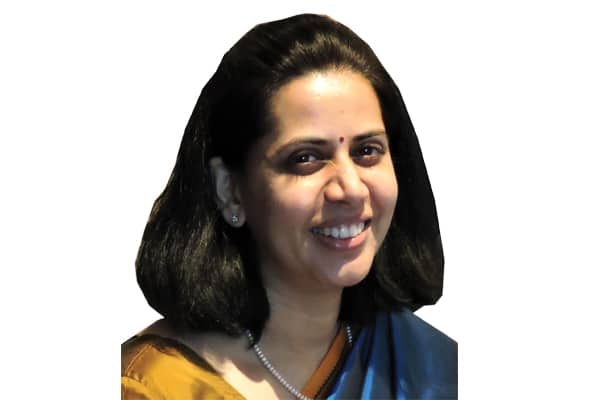 The SDG 11.5 aims to significantly reduce the number of human life losses and suffering, as well as minimise the direct economic losses incurred by disasters. In the Indian urban context, with a rapidly growing population, it is quite challenging to achieve, write Vaishali Nandan, Head of Project, ClimateSmart Cities, GIZ India and Shabaz Khan, Technical Advisor, ClimateSmart Cities, GIZ India. 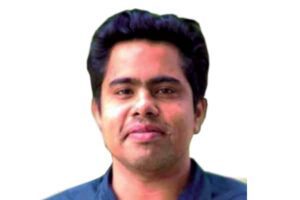 It is expected that Indian cities will grow rapidly in coming decades and over 40 per cent of India’s population will reside in urban areas by 2030, which will support nearly 75 per cent of the national Gross Domestic Product (GDP). At the same time, urban areas in the future will become highly vulnerable to natural disasters such as urban floods, heatwaves, water scarcity, cyclones (coastal cities), landslides, etc., and existing disasters will become more intense and frequent due to the rapidly changing climate. Haphazard urban development, encroachment in ecologically sensitive areas (natural drains, flood plains, wetlands, lakes, open spaces) are among other major contributing factors. Consequently, in the future, the number of affected people and the amount of economic damage will also soar substantially.

Currently, India is ranked seventh among the ten most affected countries globally as per the Global Climate Risk Index 2021 (Germanwatch 2021), considering fatalities and economic losses. Storms, flooding, and cyclones wreak the most havoc. India has already been hit by six tropical cyclones this year.

The challenge of increasing vulnerability to natural disasters in urban areas is not very straightforward. Considering this fact, the Government of India is trying to operationalise and implement several national plans, strategies, missions and individual projects to achieve SDG 11.5. The rapidly changing climate has emerged as one of the primary hindrances to the smooth implementation and operation of these strategies, projects, and plans. Therefore, now it requires a multidimensional and innovative approach to be dealt with and such approaches are hard to come up with and foster individually.

The Ministry of Housing and Urban Affairs (MoHUA), Government of India has been giving a lot of importance to creating an environment for cocreation and knowledge transfer at the national, regional and international levels. For instance, it has been closely working with several international agencies, e.g. the Deutsche Gesellschaft für Internationale Zusammenarbeit (GIZ), is designing and implementing several innovative projects to build urban resilience on behalf of Government of Germany. A few notable initiatives by MoHUA at the national level are the Climate Smart Cities Assessment Framework (CSCAF), initiation of C-Cube at NIUA and the formation of the ClimateSmart Cities Alliance. The CSCAF was developed jointly by GIZ- Climate Smart Cities project, NIUA and 26 other national and international organisations through a consultative process. The Climate Alliance has over 75 members that have pledged support at different levels. 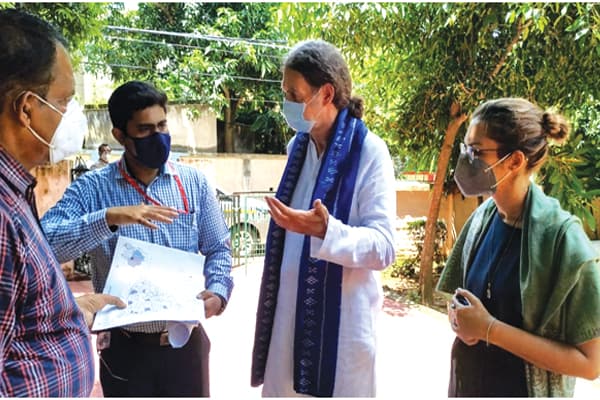 The German Ambassador to India, Mr. Walter J.Lindner visited one park in Bhubaneswar to see the progress made under the Climate Smart Cities Project for stormwater management applying the sponge city concept.

The ClimateSmart Cities Assessment Framework (CSCAF) serves as a tool for cities to assess their current climate situation and provides a roadmap for cities to adopt and implement climate change adaptation and mitigation related initiatives. The assessment is conducted on an annual basis to guide as well as monitor the progress of cities in building urban resilience towards climate change. The ministry successfully carried out the CSCAF 2.0 in 128 cities. The CSCAF 2.0 is a set of 28 diverse indicators across five sectors of which urban planning, green cover, and biodiversity are relevant for the discourse. The assessment encourages cities to adopt appropriate actions to build climate resilience.

The need for localised solutions to build climate resilience in cities is not new. The Bhubaneswar Municipal Corporation jointly with GIZ under the International Climate Initiative (IKI) funded Climate Smart Cities project and Technical University Berlin (TU Berlin) used the urban design thinking methodology and the sponge city concepts to develop several infrastructural and noninfrastructural solutions for mitigating urban flooding issues in a highly vulnerable location in Bhubaneswar city. These solutions are primarily developed based on green, blue and social infrastructure aspects for effective stormwater management.

Digital solutions are also being used as early warning mechanisms to prevent urban flooding. As a part of the International Climate Initiative (IKI), the ICT-A programme of GIZ jointly with the cities of Bhubaneswar and Kochi used design thinking methods to develop city-level digital solutions to tackle urban flooding issues. The apps were developed by involving volunteers and sanitary inspectors.

It is also important to examine the cross-linkages of different services of a city and studies show clear linkages between improper management of construction and demolition (C & D) waste and urban flooding. Documenting the heat Island effect in cities, examining the effects of depleting water bodies, decreasing open spaces and increasing built form will not only help to understand the disaster and climate risk to cities but will also help to make informed decisions to prevent future disasters. 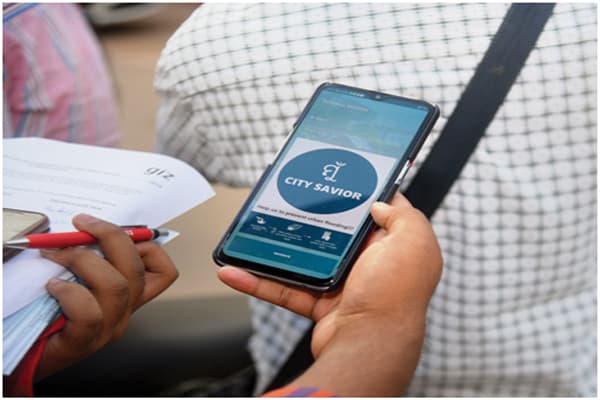 Similarly, master plans and local area plans, if climate-proofed and adhered to, can be effective tools to help prevent buildings from coming up in areas that would block the natural flow of water, preventing urban flooding. The heat island effect could be decreased by preserving the blues (lakes and water bodies) and maintaining the greens.

All these initiatives have achieved or show great potential to achieve their individual objectives and contribute towards SDG targets. The results of CSCFA 2.0 have already demonstrated a positive impact, which motivated MoHUA to expand the assessment to 500 cities by 2025.

Conclusion:
Considering the complexity of existing and potential climate risks. There is a need for multidimensional approaches to make our cities disaster-resilient through technical and technological innovations, collaborations, cocreation, knowledge exchange and peer-to-peer learning among different stakeholders. There is a lot of work that is currently being done, but it is not enough, as the focus is mostly on disaster management, emergency response or disaster recovery, rather than focusing on disaster prevention and mitigation that are also considered as key priorities in the Sendai Framework for Disaster Risk Reduction (SFDRR). Therefore, we need to emphasise pre-disaster approaches, especially for urban resilience, as we are still far from the mark.

This may not be an easy journey, but it will definitely be an iterative process that will result in saving lives, prevention of economic losses, building urban resilience and help combat the issues of climate change.