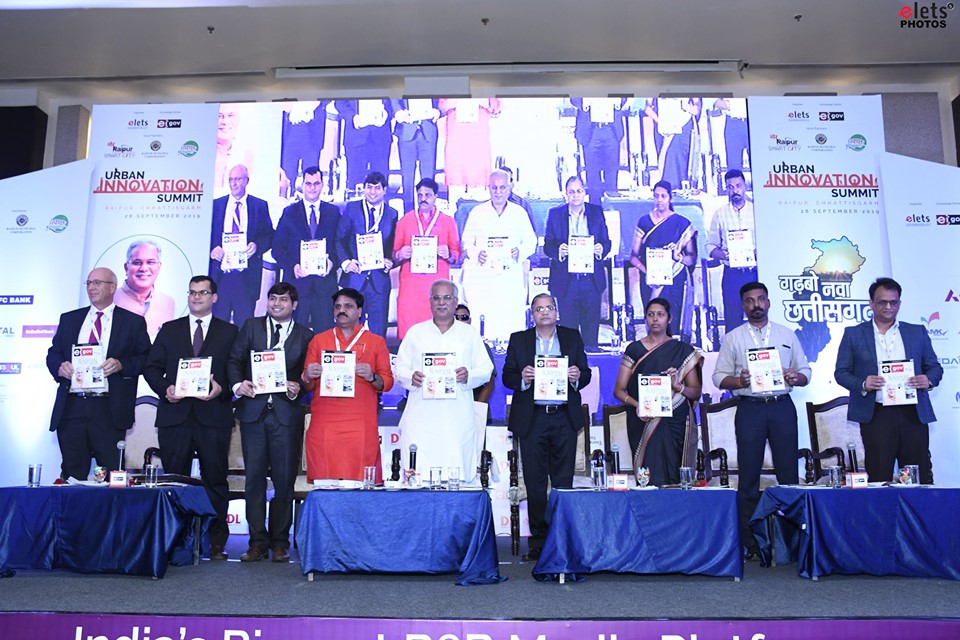 Being one of the younger states of India, Chhattisgarh had to undergo development from scratch after becoming an independent state. The capital city of Raipur, which is also the largest city in the state, is one of the major business hubs of India. It has not only seen an exponential growth in terms of industrialisation, but has undergone urban transformation as well.

Thanks to the urban architects of the city vis-à-vis the state, Raipur has undergone several technological, as well as sustainable innovation in terms of transforming into a smart yet resilient and liveable city. In the words of Shiv Anant Tayal, Commissioner, Raipur Municipal Corporation and CEO, Raipur Smart City Limited, “An ideal smart city refers to a sustainable ecosystem. We have to assure that we conserve our environment, manage our waste properly in terms of collection, segregation and disposal, conservation of water and smart drainage.”

The Chief Minister of the state, Bhupesh Baghel, has envisioned the flagship scheme of Narwa (rivulets and streams), Garuwa (livestock), Ghurwa (compost), and Baadi (cultivation). With this vision, the civic bodies of Raipur and marching towards a sustainable urban development ecosystem. Sharing the essence of the city, Pramod Dubey, Mayor, Raipur says, “Raipur will be counted as one of the fastestgrowing cities in the country. People are also willing to invest in various capacities. Also, the city is peaceful where people can spend their lives in tranquility.”

The civic bodies of the city, Raipur Municipal Corporation and the Special Purpose Vehicle (SPV) of the Raipur Smart City project have taken up multiple projects which are aligned towards the vision of the Chief Minister, as well as the overall growth of the city. Here we bring to you some such ongoing, as well as upcoming projects.

“Raipur will be counted as one of the fastest-growing cities in the country. People are also willing to invest in various capacities. Also, the city is peaceful where people can spend their lives in tranquility.”

Conserving the existing water bodies is one of the best ways of water management. According to Pramod Dubey, the water bodies, be it rivers, lakes or streams are regularly cleaned and filtered with the help of Sewerage Treatment Plants (STPs) to ensure clean flowing water. “We have started ‘Kharun Bachao Abhiyan’ for making our rivers pollution-free. In this Rs 303 crore programme, all the drain water that used to flow straight into the rivers is being treated by using Sewage Treatment Plants (STPs) and then released into the rivers. As a result of this, the river water that needed to be filtered four times is only required to be filtered once now. By doing this, not only the water will become clean, but we will also be saving a lot in terms of cost,” says Dubey.

Also Read: No case of COVID-19 in Bemetara as of yet: Shiv Anant Tayal

He also adds, “We have also started water harvesting in our gardens. Most people install water harvesting at their homes, but we started this in big gardens. This also helps in maintaining the groundwater level of our city.”

Within the Area Based Development work, some of the stretches of the city have been selected for the Smart Road project. Within this, the roads are given facelift and renovation to ensure convenience for the vehicle drivers as well as the pedestrians. Some of the works include building and renovating footpath, constructing smart and systematic parking space, installing utility ducts and constructing storm water drains, road furniture etc.

The civic bodies of the city, Raipur Municipal Corporation and the Special Purpose Vehicle (SPV) of the Raipur Smart City project have taken up multiple projects which are aligned towards the vision of the Chief Minister, as well as the overall growth of the city. Here we bring to you some such ongoing, as well as upcoming projects.

Intelligent Traffic Management System (ITMS) is one of the primary projects of any smart city. The ITMS works hand in hand with the Integrated Command and Control Centre (ICCC). The objectives of the project:

Regarding the Command & Control Centre, Dubey states, “Today from our command centre, we can ensure surveillance across the city; be it the colonies or main roads. We ensure that ambulance or fire trucks are given priority on the road, by always giving them the green signal. We have adopted this feature in our ITMS.” He also adds, “For the safety of the city, we have already installed 499 cameras and we are about to install 299 more cameras soon. So for the city to become a completely safe city, we are heading in that direction very fast.”

DEPLOYING TECHNOLOGIES TO BRING FORTH INNOVATION

Raipur has also envisaged some innovative and out of the box initiatives to offer greater convenience to the citizens.

The RCSPS project plans to implement Open Loop based Smart Card project, City Mobile App, Mobile Wallet and Portal with an aim to offer citizens a common platform of payment facility which would enable them to pay for any services within the city. The system is envisaged to bring about an enormous ease to citizens by way of paying electronically using a smart card for all perceivable services including city transport, municipal services, entertainment and amusement activities, parking, bill payments, utility payments etc.

With Drone based Survey, multiple utility services can also be covered like Tree Census, Building Change Detection Using Remote Sensing and GIS, Identification of water bodies in Municipal limits and Catchment area, Road and Footpath with Encroachment area, Parking Places, Water ATMs etc. The overall goal of this project is to geo-enable and to automate RMC /RSCL’s various functions. The larger objective is to have base map having detailed information about each property, road network, Water bodies, Trees Census etc. within the jurisdiction of RMC and implement property tax assessment and asset management system which will handle automated workflows.

Apart from the above mentioned plans, there are several other projects in place aiming to develop, renovate and restructure the existing infrastructure.

The Government of Chhattisgarh is building Nava Raipur or Atal Nagar as a planned and fully developed city in the lines of other planned cities such as Chandigarh, Bhubaneswar et al. To develop the city, the State Government has created an SPV, Nava Raipur Atal Nagar Vikas Pradhikaran.

Regarding the vision and aim of the city, Neelam Namdev Ekka says, “Nava Raipur Atal Nagar has now developed into a world class city with state-ofthe- art infrastructure as well as bringing in social cohesion and local inclusiveness. Today, Nava Raipur stands as a role model for other emerging capital cities. Even before the Smart City Mission was launched, Nava Raipur Atal Nagar understood the importance of Information Technology.”