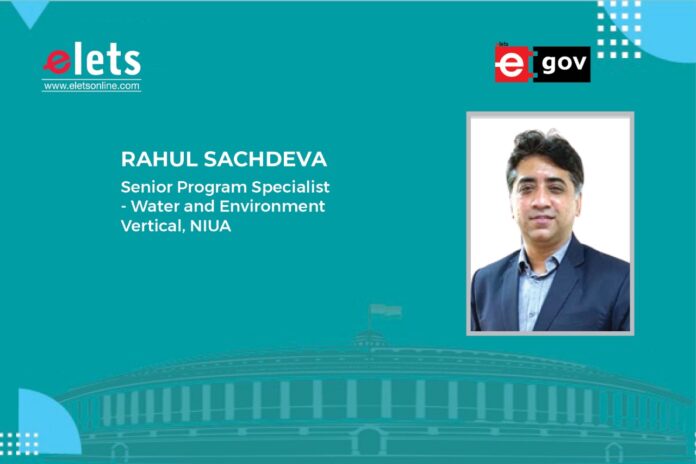 Historically it has been seen, especially in developing countries, that poor sanitation has had devastating consequences on human health, women, and girls in particular due to inadequate and improper sanitation facilities. Talking specifically about India, the lack of sanitation facilities and services pose significant disadvantages for women in terms of health, education, safety, and well-being. The planning and execution of sanitary infrastructure often lacks the sensitivity required for convenient and safe usage, for women in particular.

Now, if we look at the opposite spectrum, in terms of the role of women in the planning and delivery of sanitation services, the situation there also is not very heartening. In the context of sanitation service delivery by urban local authorities in India, the women are primarily engaged in activities like street sweeping, maintaining cleanliness in government buildings including toilets/bathrooms, door-to-door collection, segregation of household solid waste, cleaning public and community toilets and so on and so forth. However, when it comes to the universe of services ranging from operating and maintaining the basic infrastructure related to water supply, sewerage system, and stormwater drainage system, the same is being dominated by the male community with very marginal or no representation from women fraternity.

The minuscule role of women in the delivery of higher degree of basic services in urban areas can be attributed to the fact that women are traditionally been relegated with the responsibility of health and hygiene of family or at best community level engaging in services that could be considered at the bottom of the pyramid in terms of skill requirement and other lack of inadequate up-skilling opportunities for women to play a meaningful role in delivering services across the sanitation value chain. The women represent 50 per cent of the entire urban sanitation workforce in India but are engaged in low-skilled jobs earning meagre salaries with limited growth opportunities.

The sanitation-related policies and missions at the national level like National Urban Sanitation Policy (NUSP) 2008-2015, National Urban Health Mission (NUHM) 2013-2017, Swachh Bharat Mission (SBM) Urban 2014- 2019, Rajiv Awas Yojna (RAY) 2013- 2022 and others have in many ways attempted to address the women’s sanitation needs, gender-responsive sanitation solutions and enhance women’s engagement in urban local bodies, especially in relation to sanitation planning and implementation, the nature and extent of women’s role in sanitation service delivery have been of a lower base with minimal skills requirement. With the lack of opportunities coupled with social inhibitions, a woman working shoulder to shoulder with men has not been fructified.

The National Urban Livelihood Mission (NULM) 2013, launched by the Government of India, has one of the aims to create livelihoods on a sustainable basis specifically for the urban poor households by enabling them to access self-employment and skilled wage employment opportunities. The mission guidelines also emphasise convergence with other national schemes and programs to create job opportunities by imparting the marginalized required skills for getting market-based jobs. National missions like Swachh Bharat Mission – Urban and AMRUT 2.0 has brought about transformational changes in the cities and towns in terms of improving the sanitation coverage and services and in the process establishing the need for skilled manpower for the delivery of basic services in urban areas. The document “Empowering marginalized groups – convergence between SBM and DAY-NULM” released by the Government of India specifically talks about skill development and employment generation in the sanitation sector.

The state of Odisha, is doing pioneering work in the sanitation space by engaging marginalised groups, mainly women, in delivering services across the sanitation value chain for both liquid and solid waste management. The Odisha state through its scheme “GARIMA” has embarked on a journey to provide dignified and safe livelihood opportunities to workers engaged in sanitation services by Urban Local Bodies across the state. The state has brought hazardous services like sewer line cleaning, manhole cleaning, and emptying of septic tanks under the ambit of highly skilled job (which otherwise was looked upon as non- dignified and non-skilled) and other services like drain cleaning, maintenance of treatment plants, maintenance of public sanitation facilities like toilets as a skilled job. To this effect, “Sanitation Work” has been included as a separate item list in the Scheduled Employment List of Odisha state.

The Odisha state has taken a step further and is ambitiously working on elevating women up the ladder in sanitation service delivery, looking beyond traditional services like road sweeping and waste segregation. More than 16,000 Mission Shakti SHGs are empowered by the State Housing and Urban Development Department (H&UDD) and engage at both levels of service delivery as well as implementing partners in delivering urban development programs like water supply, liquid and solid waste management, subsidised mean program and livelihood generation. Around 2300 SHGs under Mission Shakti are engaged in solid waste segregation, collection, transport, treatment, reuse and disposal as per the norms of service delivery. Also, the SHGs are engaged in delivering other services like being Swachh Supervisors/Swachh Sathis, operating and managing the micro composting centers, collection of user fees, etc. But that’s only the tip of the iceberg. Odisha has the distinction of being the first state in India that has engaged women and transgender SHGs in operating and maintaining the Septage Treatment Plants (SeTP) to be set up across 114 ULBs in phase-wise manner. It is the first in the country that women are working at par with their male counterparts in delivering sanitation services in urban areas. The women SHGs have taken over O&M of SeTPs in around 9 ULBs in Odisha and many are undertaking the training to run the SeTPs to be installed and made operational in near future. Some of the cities where SHGs are operating and maintaining the SeTPs are Berhampur, Bhubaneshwar, Baripada, Sambalpur etc. Another feather in the state’s crown is the engagement of a transgender SHG who is handed the SeTP in Cuttack for O&M.

The decision to engage the SHGs in O&M of SeTP was done based on their ability in managing the community toilet facilities across the state. The selected SHGs are thoroughly trained on various aspects of operations and maintenance associated with the optimal functioning of the SeTP. The training not only covers aspects related to the functioning of the system but also improves soft skills such as record-keeping, accounts, and financial management, group dynamics, problem-solving etc. The objective is to elevate members of the SHG to gain technical and managerial skills required for operating the treatment plant, a task that earlier was only entrusted to engineers. The O&M of a SeTP includes tasks like managing the cesspool vehicles entering the premises for disposal of septage; overseeing the treatment process as per the standard protocol, upkeep of the facility by undertaking minor repairs, and staff management. Each SHG engaged in O&M receives remuneration of INR 1.5 lakh per month.

The efforts of the Odisha state government have been recognised at the national level by being awarded the ISC-FICCI Sanitation Award 2021. The award is given to Bahuchara Mata Transgender SHG for O&M of SeTP in Cuttack. The award is a testimonial of the state’s efforts in achieving the twin goals of sustainable urban sanitation along with the empowerment of the marginalised.