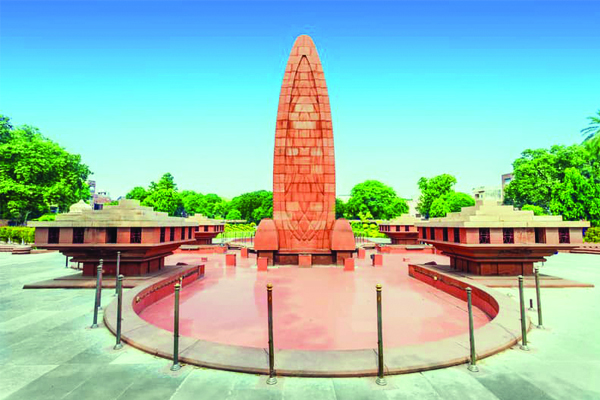 Amritsar is one of the traditional cities in India which is home to the famous Golden Temple, biggest shrine for the followers of Sikhism. The city is witness to India’s best as well as worst times. Now, Amritsar, one of the cities chosen for Smart City projects under the Smart City Mission, is taking a leap towards urban development, writes Priya Yadav of Elets News Network (ENN).

Amritsar is the land of faith and hope. It has seen the best of times and the worst of times. But every time Amritsar, the birthplace of Sikhism, has emerged as a beacon of hope. The city, barely 30 kms from Pakistan border, with its ancient legacy and ambition of being world class smart city, is embracing the future with open arms.

Amritsar is a tourist’s delight! It has all the ingredients that go into making an ideal destination. Ancient legends, historical monuments, places of worship, old bazaars, theatre traditions and colorful festivals all reflect its robust past. It is little wonder then that the city enjoys the highest footfall in the world — about 1.25 lakh people visit the city on daily basis. This is more than the footfall anywhere in the world — Paris’ Eiffel Tower is second to this.

Take a walk in the city and you will stumble across houses, shops with quaint old designs and typical thin bricks — a trademark of old constructions that almost the entire old city bore signs of. Every nook and corner of the city is steeped in rich history. True to the character of any tourist city, you can pedal your way through the entire city and seep in its glory.

The city has witnessed one of the worst genocide in human history when hundreds of people, taking part in a peaceful public meeting, were brutally killed by British at Jallianwala Bagh. This was in 1919 and 100 years later Jallianwala Bagh, in the heart of the city, still bears the scars of bullets.

Amritsar has witnessed the horrors of country’s partition up close. The elderly in the city recount the spine chilling scenes when trains filled with dead bodies pulled in at the railway station from across the border during the massacres that followed during partition in 1947.

But Amritsar has a true Punjabi neversay- die spirit that is an inspiration for the rest of the world. Post Pulwama attack when relations with neighbouring Pakistan have hit rock bottom, Punjab is gearing up to open the Kartarpur Sahib corridor with Pakistan — the corridor is intended to allow religious devotees from India to visit the Gurdwara in Kartarpur, 4.7 kilometres (2.9 miles) from the Pakistan- India border, without a visa. The corridor, which extends from Dera Baba Nanak to Kartarpur Sahib will be thrown open on November 9, 2019.

For millions of Sikhs around the globe, Amritsar is the most revered city and home to the sacred most Golden Temple. Records indicate that Guru Amardas purchased the land from Emperor Akbar to build a tank at the site in early 16th century. Following his death, it was completed by Guru Ramdas and also came to be known as Chak Ramdas or Guru ka Chak. Some of the oldest markets in Amritsar, notably Guru ka Bazaar, date back to his time. The construction of the Golden Temple was initiated by Guru Arjan Dev while Guru Hargobind, who accorded the religion a martial temper, built the Akal Takht in 1606.

Although Amritsar is often termed as the most visited religious places and the city is dwelled by majorly Sikh population, there is no dearth of a secular spirit. According to the 2011 Census of India, the percentage of Hindu population in the city is 49.4 percent. Apart from that, Christianity is followed by 1.23 percent of the people and 0.51 percent of the population follow Islam religion.

There holy city, in true sense of the term, embraces people belonging to every religion and offers them a peaceful abode to practice the faith of their choice.

A city with its feet planted in the past, Amritsar is set to embrace the smart city dream. Part of the Smart City Mission — an urban renewal and retrofitting programme of the Union government to make 100 cities citizen-friendly and sustainable — Amritsar was included in the mission’s third list of 27 cities on September 20, 2016, for the flagship scheme.

As part of the scheme, tourists and people thronging the Heritage Street, adjoining Golden Temple complex, are getting free Wi-Fi service. The smart city project will see initiation of e-buses and e-rickshaws to improve connectivity with the Bus Rapid Transit System (BRTS) stations under green and sustainable public transport project. The Ministry of Housing and Urban Affairs awarded funds for the implementation of this project.

Perhaps the biggest project that the civic body is looking at is providing 24×7 surface water supply to people in the city. “World Bank is assisting us in working out the project and our aim is to provide uninterrupted water supply to residents, “says Komal Mittal, CEO of Amritsar Smart City Limited.

The Centre too has vision to develop Amritsar as a model for sustainable and inclusive development with no one left behind, a model for modern rural and urban infrastructure. Amritsar will be developed as the gateway to North India with world-class connectivity by road, rail and air, an international industrial and trading hub, an international tourism destination with a religious, culinary, cultural, artistic and medical appeal and a hub for educational excellence at all levels in all major areas.

Hardeep Puri, Union Minister of state for Urban Development, during his recent visit to the city had unveiled 23 factors to realise his dream for the border district. These are the Smart City project to be taken up on war footing, Swachh Bharat accelerated to the next stage, increasing investment, upgrading international airport to connect with all major international capitals, a high-speed train corridor with Delhi, extension of dedicated freight rail corridor up to Attari.

Another initiative taken under the Smart City project includes procurement of about 60 sanitary napkin vending machines which will be placed at all the senior secondary schools. Talking about the rapid urbanisation, Harbir Singh, Commissioner, Municipal Corporation of Amritsar says, “New colonies are coming up in Amritsar, which are rapidly urbanising. Work is ongoing to integrate them with the city, keeping our limited resources in mind.” Projects such as Atal Mission for Rejuvenation and Urban Transformation (AMRUT) and National Heritage City Development and Augmentation Yojana (HRIDAY) are also taken up within the city to improve basic infrastructural amenities for the citizens.

Managing and conserving water resources as well as waste management are the areas of priority for the Amritsar civic authorities. “In garbage management, we have hired Essel Infraprojects, a Pune based company. We are also going for waste segregation at source in all the wards. We have completed four to five wards and partially completed seven to eight wards,” says Singh.

The Smart City project also envisages 24*7 water supply within the city. “For 24*7 water supply, we have tendered the Water Treatment Plant (WTP) component of the project. This is a very big project costing roughly around Rs 1700 to Rs 1800 crore and this is for the 24×7 surface water supply to the citizens,” says Mittal.

Talking about the rapid urbanisation, Harbir Singh, Commissioner, Municipal Corporation of Amritsar says, “New colonies are coming up in Amritsar, which are rapidly urbanising. Work is ongoing to integrate them with the city, keeping our limited resources in mind.”

The Amritsar Smart City Limited is working towards installing LED lights across the city. Shedding light on the same, Mittal states, “All the conventional lights will be retrofitted with LED lights in the city. Moreover, we have infused IT in the system to manage it better. The lights will have a Centralised Control & Monitoring System (CCMS) component in them so that they can be centrally controlled and we can get alerts if a light is not working well. This is a pan-city project, which covers all the street lights. Samudra, a Pune based company is doing the work in a joint venture with SMC Infra, which is the main financing company behind this project, which has a cost of Rs 36 crore.”

Under the smart road project, a 7.5 km stretch of road outside the periphery of the walled city. This project is of Rs 135 crore worth and has been tendered out already. Under this project, all the utilities will be shifted underground. There will be footpaths, cycle tracks and horticulture along with proper parking spaces, vending zones, auto bi-lanes, and bus bi-lanes.

There are several other projects in the pipeline, such as Integrated Command and Control Centre, Smart Parking, free Wi-Fi spots at the Heritage Street, renewable energy generation to name a few. The members of the civic bodies and SPV are hopeful of realising the Smart City dream in Amritsar soon, without affecting the traditional and spiritual flavour of the city.