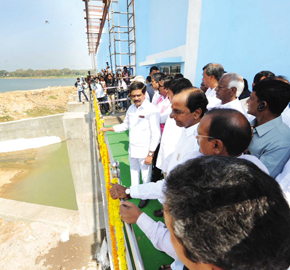 Telangana, having come into existence recently in 2014, is on a fast track mode in urban development, achieving significant milestones in government administration year-on-year. Powered by a strong leadership and armed with focused policies, the state is on the move steadily with a determination for holistic development of the region.
The state believes that urban development is the social, cultural, economic and physical development of cities, as well as the underlying causes of these processes. Cities and their development is a central topic in human geography, and the study of cities makes up the sub-discipline of city geography or urbanism. Physical development of cities especially infrastructure, real estate and affordable housing is on the top agenda of the state leadership.
According to KT Rama Rao, Minister for Municipal Administration and Urban Development, Information Technology, Government of Telangana, urban development has been one of the major focus areas. “In Telangana, urban population constitutes 40 per cent and migration from rural areas to cities, especially to Hyderabad, is more.  We are in the process of forming 24 new urban development authorities to ensure structured urban growth,” Rao says.
He states creating 21 new districts is meant to ensure smaller towns also develop and the youth get better employment opportunities. Besides, these urban bodies will transform Telangana, reducing pressure on Hyderabad and Warangal cities. In addition to four existing development authorities – Hyderabad Metropolitan Development. Infrastructure Sector
in India As infrastructure sector is a key driver for the state economy and the national economy, the sector is majorly responsible for propelling Telangana’s overall development. It has intense focus from government for initiating policies that would ensure time-bound creation of world class infrastructure in the country.
The Central Government has announced its target of `25 trillion ($376.53 billion) investment in infrastructure over a period of three years, which will include Rs 8 trillion ($120.49 billion) for developing 27 industrial clusters and an additional `5 trillion ($75.30 billion) for road, railway and port connectivity projects. Market Size: India needs Rs. 31 trillion ($454.83 billion) to spend on infrastructure development in five years, with 70 per cent of funds needed for power, roads and urban infrastructure segments.
The Indian construction equipment industry is expected to grow to $5 billion by FY2019- 20 from current size of $2.8 billion, according to a report released by the Indian Construction Equipment Manufacturers’ Association (ICEMA).
Foreign Direct Investment (FDI) received in construction development sector from April 2000 to March 2016 stood at $24.19 billion, according to the Department of Industrial Policy and Promotion (DIPP).

Telangana is witnessing significant interest from international investors in the infrastructure space. Many Spanish companies are keen on collaborating on infrastructure, high speed trains, renewable energy and developing smart cities. The Asian Development Bank (ADB) has approved $631 million loan to develop the first coastal corridor, namely the Vishakhapatnam-Chennai industrial corridor, which is expected to bring manufacturing and export industries to the east coast.
Airports Authority of India (AAI) plans to develop city-side infrastructure at 13 regional airports across India with the help of private players for building of hotels, car parks and other facilities, and thereby boost its non-aeronautical revenues.
The Government of India has earmarked `50,000 crore ($ 7.34 billion) to develop 100 smart cities across the country. The Government released its list of 98 cities for the smart cities project in August 2015.