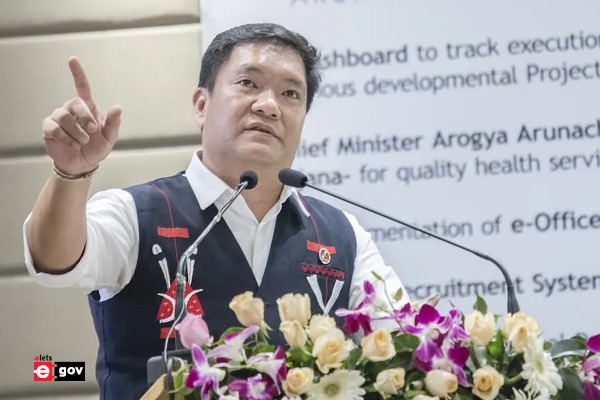 With the launch of ‘Sarkar Aapke Dwar’, a government initiative to bring citizens closer to the government, the Government of Arunachal Pradesh has declared the year 2022-23 as the ‘year of e-governance’.

In his remarks at the two-day regional conference on ‘Bringing Citizens and Government Closer Through Administrative Reforms’ at Itanagar, Arunachal Pradesh, the Chief Minister Pema Khandu said that under the ambitious e-governance scheme, 100 per cent e-office is already implemented in the state Civil Secretariat, besides adopting e-Assembly and e-Cabinet modules.

Senior officers of the Central and state governments responsible for implementing good governance practices, and officials from advanced levels participated in the conference. This is the first time such a regional conference has been held in northeast India.

“Till date, we have electronically moved 8,10,350 files through e-offices and I must say, the file movement has become transparent as well as fast. It has also pushed accountability as it is now easy to locate in which department or on whose table a particular file is pending,” the CM stated.

Furthermore, he revealed that 17 e-Pragati review meetings had been conducted till date, among which more than 200 projects and schemes with deputy commissioners and line departments have been reviewed and fast-tracked.

According to the ministry, the government has identified 22 sectors for onboarding the e-office platform. By October this year, all offices, including those in the districts, have been directed to get onboard.

The CM further said that more than 1,000 ‘Sarkar Aapke Dwar’ camps have been held in the last five years benefitting more than 12 lakh people.

The Department of Administrative Reforms and Public Grievances (DAR & PG) has signed a Memorandum of Understanding (MoU) with the Government of Arunachal Pradesh, according to Jitendra Singh, Union Minister of State (Independent charge) for Personnel, Public Grievances, and Pensions.

According to the MoU, the DAR & PG would work with the state government to create a District Good Governance portal, to track each district’s performance on a monthly basis, and assist in benchmarking performance, while supporting the state in upgrading its e-office version 5.6 to e-office version 7.0 in a phased manner, the Union Minister added.

“The DARPG, as per the MoU, will collaborate with the state government to develop a ‘district good governance portal’ for monitoring the performance of each district on a monthly basis and help in benchmarking performance, besides helping the state in upgrading the e-office version 5.6 to e-office version 7.0 in a phased manner,” the minister announced.

Further, Singh stated that over the course of the following five years, 500 Arunachal Pradesh Administrative Services officers would participate in mid-career building programmes in governance organised by the National Centre for Good Governance (NCGG) under the DAR & PG.

The purpose of the regional conferences is to provide a forum for sharing experiences in the creation and implementation of good governance techniques with a view to bringing national and state-level organisations along with other stakeholders including NGOs, intelligentsia, media among others.