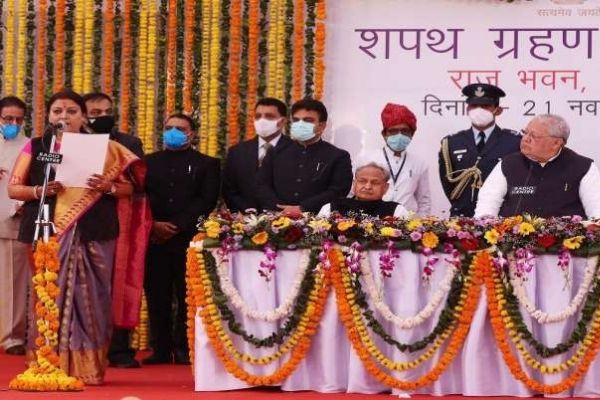 The Government of Rajasthan, 16 months ahead of the state polls, moved a major reshuffle wherein 11 Cabinet Ministers and four Minsters of State (MoS) took the oath on Sunday, November 21, in the presence of the Governor of State Kalraj Mishra.

Among the 11 sworn in Cabinet ministers are Bhajan Lal Jatav, Mamta Bhupesh and Tikaram Jully who have been promoted from Minister of State to the Cabinet. While,, Hemaram Chaudhary was a newly sworn in minister in the cabinet. Also, Ramesh Meena and Vishwendra Singh has returned to the cabinet. Besides, Mahendrajeet Singh Malviya, Ramlal Jat, Maesh Joshi, Govindram Meghwal and Shakuntla Rawat were also sworn in as cabinet ministers.

After this latest reshuffle in the Rajasthan’s government, the council of ministers in the state include 19 cabinet ministers and 10 MoS and the Chief Minister.

Ahead of the reshuffle, all ministers tendered their resignations to the governor after CM Ashok Gehlot presided a meeting with his ministers earlier in the evening at his residence. A Pradesh Congress Committee (PCC) meeting was set up on Sunday. Earlier, Party General Secretary in-charge Ajay Maken had put out the word that three minsters including Govind Singh Dotsara, Education minister and PCC President; Harish Chaudhary, Revenue minister and AICC in-charge of Punjab; and Raghu Sharma, medical and health minister had given their resignations to the party president following ‘one man, one post’ principle.