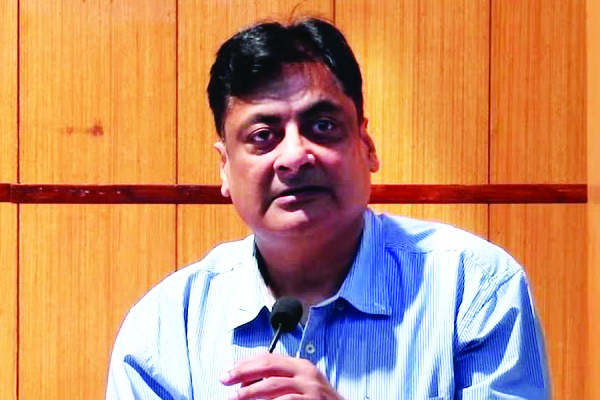 Gujarat has the lowest number of unemployed youth in the country. Anybody who wants to work would get a job. This is a result of government’s sincere efforts all these years, which includes the Vibrant Gujarat Summits, says Vipul Mittra, Additional Chief Secretary, Labour & Employment, Gujarat in an exclusive interview with Hemangini Kanth Rajpur of Elets News Network (ENN). In this interview, he gives his insights Vipul Mittra on skilling and employment in Gujarat.

What steps have the Government of Gujarat has taken to ensure employment generation?

Gujarat has 33 districts and each of them has a District Employment Exchange. We are trying to make it all digital very soon so that the employees and the potential employees can get access to each other through the use of technology. Gujarat has the lowest number of unemployed youth in the country. Anybody who wants to work would get a job. This is a result of the government’s sincere efforts all these years, which includes the Vibrant Gujarat Summits.

We need to match the requirements of the industry to the talents of the youth available. Skill mismatch is the main problem which we are dealing with.

We have employed consultants in our employment exchanges and these exchanges have now become career counselling centres. The youth go there, talk to the consultants and understand what opportunities are available. After that, they can apply for the position online by uploading their documents digitally. The employees and potential employees can also look through the database and pick up people.

We also conduct Bharti Melas where we provide placement services. Every year, lakhs of youth are employed through these job fairs. These are proper recruitment events and should not be confused with common fairs. These events involve meetings in which detailed interviews and discussions take place. The participating companies interview people and recruit them on the spot. We have two-three mechanisms for skilling.

We have about 287 Industrial Training Institutes (ITIs) in the state. There is more than one ITI in each Taluka so the whole state is covered in a network of ITIs. All these ITIs put together, skill about 1,45,000 to 1,75,000 students every year. These students are skilled in more than 60 trades.

We are also tying up with some industries for setting up Bachelor Preparatory Programming (BPP) based ITIs. Also, the industries can adopt certain ITIs by bringing their own faculty, equipment, raw materials, etc. so that they can train people and then recruit them after the completion of their course. There is a competition between industries and the state government for providing trained manpower.

Other than this, we have Kaushal Vikas Kendras (KVKs) in each Taluka as part of the ecosystem of skilling. This is a precursor to the Pradhan Mantri Kaushal Vikas Yojana (PMKVY) programme, which was launched by our Prime Minister. In fact, this was his brainchild when he was the Chief Minister of Gujarat. The societies through this system.

Government is proactively increasing the number of training skills available in the ITIs. Many new skills are being added. We are adding technologies like Artificial Intelligence (AI), 3D printing, etc. Other than this, we encourage and support private players as well.

A large number of people do not want to get into formal education; they want to get a vocational education. In countries like Germany and the UK for example, almost 40 to 50 percent of school pass-outs go straight into occupations. We want to create people who are employable, rather than forcing people to do B.A or B.Com because they have nothing else to do.

How is the response from the people of Gujarat?

I think the response is great and not only from Gujarat, but people from other states are also coming and taking advantage of the abundance of employment in the state. In fact, a large number of people keep flowing into Gujarat from states which have lesser industrialisation. We give preference to the local youth as far as possible. But sometimes large industries don’t get enough manpower and hence there are a lot of opportunities for people from other states also.

If people find that their pay level is not enough, they just leave and go to another industry. If they leave today, tomorrow they will get a job somewhere else. It has become like any other developed country. The opportunities are huge. As a result of this, worker unions are not very active. People do not go to unions because they can get jobs easily. Basically, this is an employee’s market rather than being an employer’s market.

What is your message for the youth?

By the time they are in their final year in school, the youth should make up their mind whether they want to get into formal education or they want to get into vocational education. It is not necessary for everybody to get into graduation just for the sake of getting a degree. If you don’t have interest in B.A, B.Com or B.Sc., there is no point in wasting two to three years in college. After 10th class, you must make up your mind where you want to go.

The state government is seriously thinking of introducing vocational schemes even in 11th and 12th standards. While the students are studying in these classes, there will be six or seven elective vocational streams which will help them understand the possibilities that exist in the vocational streams.

If you want to be a film-maker or a fashion designer, you should be able to get into that stream after plus two; you don’t need to be a graduate. There are a large number of such fields where people don’t need formal education. They can get into vocational education and follow their dreams. There are a huge number of choices but the youth have to be very clear in their mind, as to what they want to pursue; they should not be fickleminded.

When we were growing up, we had three or four choices like becoming a doctor, engineer, IAS officer or lawyer. Therefore people did not have to think so much before entering. Right now there are so many choices that the aspirants need more counselling and aptitude testing so that they can make up their minds where they want to go and once they make up their mind, they need to pursue that field, because every field requires the same rigour.

If anybody feels that they don’t want to go to college because they don’t want to study and want to enjoy life instead, that will not happen; because if the person wants to go into a vocational field, that would also require hard work. I think you should chase your dreams but before doing that you must know what your dream is. In fact, my second book, The Dream Chasers, is based on the very same concept that the youth is unable to distinguish between his/her dream and any wild idea. A dream is something which is practical, full of passion and hard work. If you dream about getting into a particular field you should really know all the parameters involved, like opportunities, problems, etc. and you must be able to work hard to get that; hard work is the key here.