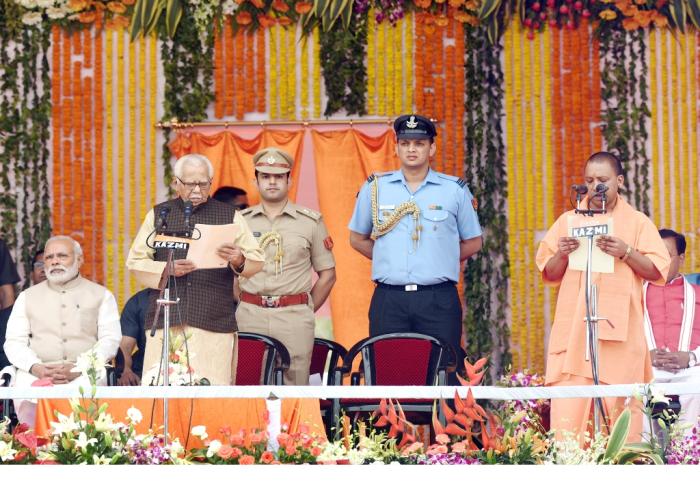 Yogi Adityanath was sworn-in as the new Chief Minister of Uttar Pradesh, along with his two deputies BJP UP Chief Keshav Prasad Maurya and BJP’s National Vice-President Dinesh Sharma who also took oath as the Deputy Chief Ministers.

The oath of office and secrecy was administrated by Governor Ram Naik at a function at Kanshiram Smriti Upvan in Lucknow. The oath-taking ceremony was attended by Prime Minister Narendra Modi and BJP President Amit Shah.

The Bharatiya Janata Party elected 44-year-old five-term Member of Parliament from Gorakhpur constituency Yogi Adityanath as their legislature party leader at a meeting of the newly elected MLAs in Uttar Pradesh on Saturday. After the meeting, he met Governor Ram Naik and staked claim to form the Government in the State.

Keeping in line with Prime Minister Narendra Modi’s motto of ‘Sabka Saath, Sabka Vikas’, the Yogi Cabinet also has one Muslim face. Mohsin Raza is a spokesperson in BJP and is considered BJP’s Muslim face in Uttar Pradesh. “Our government is committed to fulfill all the promises made by the Bharatiya Janata Party (BJP) in its election manifesto before the Assembly elections. We will work for all sections without bias in line with the Prime Minister Narendra Modi’s motto ‘Sabka Saath, Sabka Vikas’,” said newly-appointed Uttar Pradesh Chief Minister Yogi Adityanath oin his first press conference.

“We will adhere to the credo of ‘Development for All’ initiated by Prime Minister Narendra Modi. The government and its officials would be made accountable to the people, Adityanath said.

The spokespersons later told the media that the Chief Minister had directed his ministers to declare their assets within the next fortnight and to avoid making statements in the public.