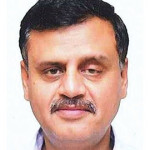 The Centre has approved Rs. 11,000cr foreign investment proposals for electronics manufacturing in the country and investment proposals worth around Rs. 1 lakh-crore are in the pipeline, says Rajiv Kumar, Joint Secretary, DeitY, Ministry of Communications & IT, Government of India, in an interview with Gautam Debroy of Elets News Network. The government is giving utmost importance to the electronics manufacturing sector, Kumar says

What is your view on the Digital India programme?

Digital India is an ambitious and flagship programme of the government to empower India and convert it into a knowledge economy. It aims to empower citizens and transform their lives, and is an important paradigm of this programme.

The three vision areas of this mission are: digital infrastructure as a utility to every citizen, governance and services on demand, and digital empowerment of citizens. The entire digital ecosystem has been addressed under this mission.

The Digital India initiative encompasses the entire ecosystem, providing and working on the issues of connectivity, broadband access to every citizen, digital literacy, more and more services on demand, enhancing the depth and penetration of the common service centres to every panchayats, and opening up new applications for the benefit of citizens, like e-Hospital, Digital Locker. These new applications would definitely cater to the need of citizens.

What kind of challenges are you facing while implementing the Digital India programme?

Such a big programme will definitely involve some challenges. The primary challenge we are facing at the moment is to address these concerns in a meaningful manner, so as to derive maximum benefit from the available resources. So, the ambitious programme and its sub-programmes are being rolled out, and once their implementation is done, it will become easier for the people to get all the benefits of the programme.

What response are you getting from various state governments? When the programme was launched by the Honourable Prime Minister, we had weeklong celebrations in different states. Following the celebrations, the state governments sent very impressive lists of achievements and activities that they undertook in that particular week, which in turn shows that the level of enthusiasm among the state governments is quite high with regard to the Digital India initiative. They have reacted very positively to some of the schemes.

In fact, as far as connectivity issues are concerned, many of the states have now opted for the government-enabled BharatNet model. It again reflects on the receptivity of the Digital India programme and the response to the initiative is actually very encouraging.

Digital Locker and Cloud are two buzzwords these days. How is the government using the two for the welfare of the people at large?

Digital Locker is a service, which combines the facility of safely securing your documents in a Cloud mode. It’s basically a private space in a Public Cloud. Also, digitally signed certificates and documents generated by various organisations during the lifetime of a particular individual can be stored in this space. These documents are required by the organisations concerned at the time of giving employments and granting entitlements to benefits under certain government-run programmes.

For example, a Class X certificate is normally used as a reference for one’s date of birth. So, once these certificates are maintained in the Digital Locker, you don’t have to physically carry papers and certificates. Whenever you are asked to provide the certificate, you need to provide only the URL for your certificate. Further, this addresses the problem of authenticity of the documents as well.

We currently have about 10 lakh citizens who have opened Digital Locker accounts, and currently these lockers contain about three lakh documents. However, this number is sure to grow as people gain awareness about the usefulness of keeping their documents in the Digital Locker.

A smart city can also address the entire spectrum of a digital India in the sense that electronics manufacturing could be one angle to it, because it is generally pollution free

We are also in the process of convincing the states on the use and benefits of Cloud-enabled state data centres, use of Cloud for Digital Locker kind of utility service, etc. And, the state governments are quite inclined to use these services. Of late, many of the state governments have realised the usefulness of state data centres, and they are in the process of upgrading their software or seeking additional space in Cloud.

Have you received any foreign proposals for investment in the IT sector of India?

Yes, we are getting investment proposals from several foreign companies either in hardware manufacturing or for building up core digital infrastructures. As the people are already aware, Microsoft has invested heavily into the development of Cloud infrastructure and they will be offering Cloud infrastructure from India. It goes on to prove that the facilities Indian scientists can create are simply world class.

How can the government relate the twin concepts of Digital India and Smart City?

Well, that we can do in the same way as we offered services on both normal handsets as well as smart phones by enabling more and more features, which will allow the citizens to avail benefits, which an IT-enabled technology can bring to their lives.

A smart city can also address the entire spectrum of a digital India in the sense that electronics manufacturing could be one angle to it, because it is generally pollution free.

Greater access to wi-fi-enabled services, availability of electronic governance services, presence of high-speed Internet, servicing through state data centres, etc., are what connect the Digital India mission with the idea of Smart City.

Can we compete with China, as far as electronics manufacturing is concerned?

There is no straight answer to this question; but I feel we can complement each other in the sense that we also provide the competitiveness that China is known for…and that would enable us to be in the same level playing field. Industries, which are manufacturing electronic goods elsewhere, are also looking at facilities and opportunities available in India and they could come up with their own proposals.