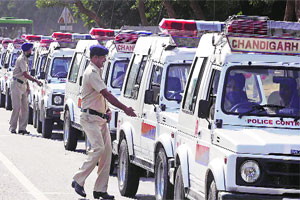 Chandigarh police will soon be able to track the movement of vehicles used in criminal offences on a real-time basis. This is part of a new project to bring in most of the city under CCTV surveillance and automate the process of issuance of traffic challans.

After a field survey, the police have decided to procure 660 cameras — a mix of basic CCTV, automatic number plate recognition system (ANPR) and pan tilt zoom (PTZ) — to be deployed across 220 locations. The locations include 40 to 50 traffic junctions and several markets.

A tender for the selection of a consultant, which will help the police in the preparation of request for proposal (RFP), specifications, hiring of a system integrator and overseeing implementation, will be out in a month. The same was decided in a meeting of senior officials headed by RP Upadhyaya, inspector general of police, Chandigarh. The decision was taken after receiving a go-ahead from the union territory administration.

According to Maneesh Chaudhary, senior superintendent of police (traffic), the cost of the project will be more than Rs 10 crore, though a more precise estimation will be provided by the consultant.

Under the new system, the ANPR cameras will capture the vehicle number and match it in the vehicular databases of Panchkula, Mohali and Chandigarh. The system will also check with the database of ‘wanted vehicles’ of the national crime records bureau (NCRB).

“The system will have a ‘flagging’ application. The application will track the movement of vehicles. It will generate a popup whenever a vehicle, used in criminal offences, appears in any of cameras deployed in the city,” Chaudhary said. “Once implemented, we will be able to track a vehicle on a realtime basis,” he added.

The city already has 216 cameras mounted at border check points, market areas and traffic junctions. The police has deployed 64 CCTV cameras at the border, 52 in three market places including sector 17, sector 22 and sector 35 and100 at several traffic junctions. However, these cameras didn’t include ANPR cameras which could help the police in capturing the vehicle number.

A live feed goes to two police stations from these cameras. Based on the video feed on traffic violations, on a daily basis the police issues around 150 notices, which are sent directly to vehicle owner’s residence. The process of issuing notice is manual though.

Under the project, an automatic challan generation system will be put in place, which will itself capture the details of the vehicle involved in traffic violation, generate a notice on the address of the vehicle owner, and put into an envelop—all without any manual interface. A cop will have to check the notice and post it to the given address. The same work engages at least four cops as of now, the police official said.

The project also includes red light violation system wherein sensors will be placed beneath road to keep a check on violations. The cops will also have infrared night-vision cameras.