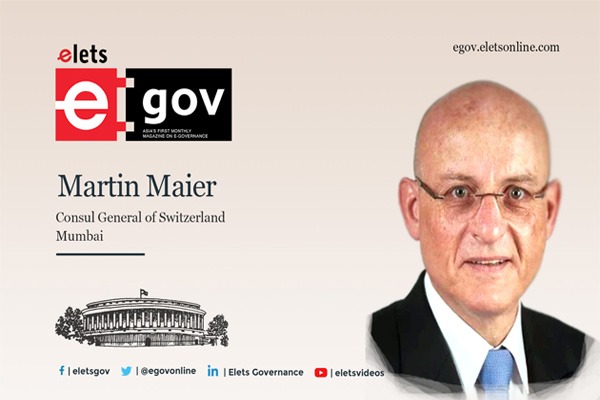 The Indian Government is investing a lot in the Indian infrastructure sector and Switzerland is keen to support these efforts. Swiss cleantech companies can contribute much and make Indian infrastructure more sustainable. One example is the new, carbon neutral Noida International Airport in New Delhi, which is being built by Zurich Airport, shares Martin Maier, Consul General of Switzerland, Mumbai, in an exclusive interview with Krishna Mishra of Elets News Network (ENN). Edited excerpts:

Switzerland has made remarkable strides in developing clean energy technologies. What have been the hallmarks of Swiss cutting-edge innovations in the energy sector?

As the most innovative country in the world, Switzerland has also created a large number of new products in the cleantech sector. Among the vast number of successful Swiss innovation projects, I can mention, for example, the Swiss SME Flisom, which produces flexible, lightweight, thin and customizable solar panels and the startup SoHhyTec that has invented a revolutionary process to harness solar energy to manufacture the cheapest green hydrogen available in the world, at less than 2 USD/kg. These examples not only display the strength of Switzerland but also favour the creation of innovation in the cleantech sector. The advantages of the Swiss innovation ecosystem are a high-quality research and education system, available clusters, knowledge and technology transfer, which work well and help turning basic research into products and services. Furthermore, Switzerland has an excellent intellectual property protection system and the right mix of enterprises. Most companies are SMEs, but there are also multinationals which nurture the system. All these factors allow a flourishing cleantech scenario with incremental as well as radical innovations for the benefit of the environment.

Please throw some light on how Switzerland can help India in attaining low carbon inclusive growth and fulfil its commitment to reduce greenhouse gas emissions.

The Indian Government is investing a lot in the Indian infrastructure sector and Switzerland is keen to support these efforts. Swiss cleantech companies can contribute much and make Indian infrastructure more sustainable. One example is the new, carbon neutral Noida International Airport in New Delhi, which is being built by Zurich Airport.

Switzerland has several projects in the field of climate change and environment implemented in India by the Swiss Agency for Development and Cooperation (SDC). SDC works on both climate change adaptation and mitigation, and all its programmes are aligned with India’s medium and long- term climate objectives, whether it is the reduction of emissions intensity of GDP by 45%, or the increase in renewable energies. It works with ministries, states, cities, universities, organisations and the private sector. In the domain of buildings and construction, Switzerland supports energy efficiency measures as well as the Integration of Renewable Energy in buildings through a specific project: BEEP. Other projects deal with climate action plans, states and cities, disaster risk management in the Himalayas, insurance for farmers, solar irrigation, clean air, and the decarbonisation of the industry. A successful project is Low Carbon Cement, in which Swiss and Indian Universities (IIT Delhi and Madras) and Organisations (Development Alternatives) have successfully developed and tested a new type of cement that produces 30 to 40% less CO2. Since the cement is cheaper, and has better properties, it is being quickly adopted by private manufacturers. India being the second producer and consumer of cement in the world, the impacts are massive; and since cement is responsible for 7-8% of CO2 emissions worldwide, the contribution to decarbonisation is immense: potentially 0.5 Gt of CO2 annually.

The Indo-Swiss Building Energy Efficiency Project (BEEP) was launched back in 2011. How has been the progress so far? Tell us about some of your other initiatives to help India’s rapidly growing and ambitious Indian energy market.

The success of the project has been overwhelming. Through this Indo-Swiss partnership, innovative technologies have been introduced, adapted, tested and disseminated, leading to 30% gains in energy efficiency at very moderate additional costs. Today, 5’000 people benefit from better housing (living in 1’200 thermally comfortable housing units) due to energy efficient design measures in buildings, leading to 1500 tonnes of CO2 emission avoided every year. Thousands of architects, engineers and young professionals have been trained, and BEEP’s recommendations have been applied to more than 40 public and private buildings around the country. Thanks to the project support, the Energy Conservation Building Codes for Residential Buildings (ECPC) was developed by the Indian Bureau of Energy Efficiency, and is now being implemented in several states in India. It is also being applied to the construction of affordable houses, including 3 million of housing units in Andhra Pradesh. ECPC was also incorporated into the Energy Conservation Bill 2022. Given the rate of construction of residential buildings, this is a huge contribution to the low carbon development of the country. In partnership with the private sector, the project aims to design and demonstrate locally adapted building integrated renewable energy technologies. For instance, SDC currently supports Mahindra Lifespaces Developers Limited for the integration of solar and wind turbines in what will be the first carbon net zero residential building in India. It also supports the construction of a biomethanation plant for cooling operations with Big Basket. Renewable selection tools as well as innovative financial projects have also been developed. Other initiatives concern cities action plans, in which cities plan and implement infrastructure projects in the field of energy, waste, water management, transport and biodiversity, addressing present and future needs at the same time. Through the CapaCITIES project, cities reach their low emissions development targets while increasing their resilience to climate change. The growing energy demand is a huge challenge for states and cities. Increasing energy efficiency is key to ensure universal access to energy while reducing emissions of CO2 and pollution. SDC is also starting a new project to support the adoption of electric vehicles in public transports. What are the key components of Indo-Swiss bilateral cooperation? What are the priority sectors and how can both the countries collaborate to strengthen their partnership further?

The Swiss Government, primarily through the Swiss Business Hub India, supports SMEs for market entry in India. Swiss companies continue flocking to India where mutually beneficial opportunities are to be found in many sectors. I see especially a huge synergy potential in the field of clean and sustainable technologies. Next year for example, the Swiss Business Hub is aiming to bring a Swiss railway delegation to India and connect them to relevant Indian stakeholders in order to initiate partnerships. SDC has signed several MoUs with Indian authorities such as the Ministry of Power, Ministry of Environment, Forest and Climate Change, and NITI Aayog. Furthermore, India and the European Free Trade Association EFTA, of which Switzerland is a key member, started the evaluations for a Free Trade Agreement, which, once concluded, would strengthen the Indo-Swiss partnership considerably. I am positive that detailed FTA negotiations can be started soon and will be concluded in due time.