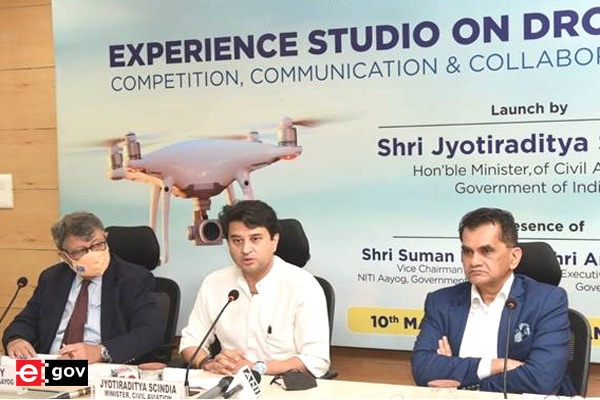 To promote a collaborative ecosystem aimed at fostering innovation and adoption of drones for public services, an experience studio on drones was launched on 10 May. by the Union Minister of Civil Aviation Jyotiraditya Scindia at NITI Aayog. NITI Aayog Vice Chairperson Suman Bery and CEO Amitabh Kant were also present at the inaugural event.

Union Minister of Civil Aviation Jyotiraditya Scindia said, ‘We have the potential to make India a global drone hub by 2030. It is imperative for us to boost the usage of drones in different industrial- and defence-related sectors to leverage the benefits of this technology, as highlighted by Hon’ble Prime Minister Narendra Modi. We are actively working towards making drone services easily accessible. India will soon witness a higher number of industries embracing drone innovation. This will eventually lead to a revolution that will touch the life of every citizen, thereby realizing the PM’s goal of an Aatmabirhar Bharat.’

He also added, ‘With the active participation of the stakeholders of the drone industry and the Government of India, the drone industry is set on a path of exponential growth. The government will enable the continuity of this accelerated drone adoption by easing drone regulations and through drone literacy via programmes such as Drone Shakti and Kisan Drones. I would like to praise NITI Aayog for hosting such an exciting month-long drone event, enabling knowledge-sharing and exchange of ideas and fuelling innovation and growth in the drone ecosystem. Moreover, the cutting-edge experience studio at NITI Aayog is a symbol of technology excellence, which I am sure, will inspire curious minds to resolve real-world problems.’

NITI Aayog Vice Chairperson Suman Bery said, ‘Drones are expected to be significant creators of employment and economic growth due to their reach, versatility, and ease of use, especially in India’s remote and inaccessible areas. The NITI experience studio launched today shall help promote various applications of drone technology to public and private stakeholders as well as help them fast-track adoption of drone technology within their organisations and aid in building a robust drone industry in India.’

NITI Aayog CEO Amitabh Kant said, ‘Through the experience studio, start-ups and enterprises will be able to showcase their innovations and next-gen technology-enabled solutions. It will allow various government departments to experience these technologies first-hand and think about how they can be contextually used on the ground in public services. Additionally, the experience studio will also act as an anchor for initiating proofs-of-concept and pilots aimed at solving issues that persist in service deliveries. Smaller focused cohorts will be created through the experience studio, which will eventually help in mainstreaming these solutions once they are field-ready.’

The Union Minister also announced the launch of the following challenges, which will be held by NITI Aayog in collaboration with the Ministry of Civil Aviation (MoCA):

(a) ‘Drones for Social Impact Competition’: For the start-up community to showcase their capabilities to solve critical problem statements in various use cases.

(b) ‘Robotics Workshop and Competition’: For students of Atal Tinkering Labs to foster the spirit of innovation and problem-solving.

The Minister assured that MoCA will extend all the support required for these competitions as well as for organizing other events planned during the month to help develop the ecosystem.

The launch was followed by an interaction with key stakeholders from the industry.

During the interactive session, several recommendations were made for promoting the drone sector. Some of the areas that were discussed were promoting manufacturing and Drones-as-a-Service, providing impetus to innovation, government as an adopter and the next big steps for the sector.

In September 2021, NITI Aayog in collaboration with Amazon Web Services (AWS) and Intel, established a Cloud Innovation Centre to help showcase the potential of frontier technologies such as Artificial Intelligence (AI), Machine Learning (ML), Internet of Things (IoT), Augmented Reality and Virtual Reality (AR/VR), Blockchain, Robotics etc. Such a studio would help in accelerating the application of frontier technologies in public sector use cases.

To effectively leverage the initiative, NITI Aayog has designed a ‘Monthly Innovation Chronicle’ programme that will focus on a particular thematic area for showcasing innovation, with the potential of being technology-led and necessitating government-industry collaboration for larger social impact. Key tenets of this programme are communication, collaboration and competition with ecosystem partners such as industry and innovators (enterprises and startups), academia and research, government and allied institutions, Atal Innovation Mission network (especially Atal Tinkering Labs), state and sub-state innovation councils/units, NITI Aayog’s connected external partners, not-for-profit, donor and multi-lateral agencies, and industry agencies, bodies and funding organizations.

For the month of May, the thematic area identified is drones, which is being organised by NITI Aayog in collaboration with the World Economic Forum (WEF) and the Drones Federation of India (DFI). During the month, relevant events and content viz short videos, panel discussions, etc., will be curated on https://cic.niti.gov.in.

During the event, a competition for start-ups to identify use cases for ‘Drones for Social Impact’ was launched. Under the competition, real-world case studies of projects executed by Indian start-ups are invited on the use cases in the areas of nature conservation, social safety, accessibility to remote/underserved locations, rural mobility, disaster response etc.