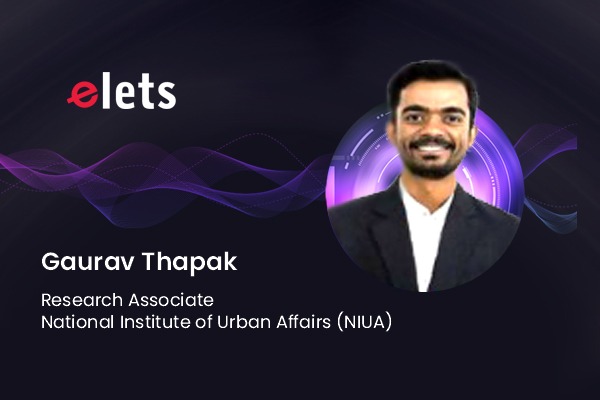 The commitment of India in COP26 to go Net Zero by 2070, as pledged by the Prime Minister of India, Narendra Modi is ambitious but it is urgent. According to a study by the Research Institute for Humanity and Nature, Japan1 the per capita emissions from major urban centres in India are about two to three times higher than the national per capita average of emissions. It is becoming increasingly difficult to reconcile economic growth with an agenda to reduce emissions, writes Gaurav Thapak, Research Associate, National Institute of Urban Affairs (NIUA).

The UN-SDGs have been localised in India through the efforts of NITI Aayog. The NITI Aayog has also prepared an SDG India Index considering the circumstances and issues of development that are unique to India. The SDG India Index is a customised set of parameters for the Indian development landscape addressing the needs and priorities to localise the global agenda in the country. It also acts as an assessment framework for monitoring the multi-sectoral development in India. For SDG 11.6, the SDG India Index Baseline Report 20182, SDG India Index and Dashboard Report for the years 2019-203 and 2020-214 use two indicators: percentage of wards with 100 per cent door-to-door collection and percentage of waste processed. The baseline of 2018 marks both indicators at 74 per cent and 25 per cent respectively. There has been a consistent growth in the indicator values reporting 88 per cent and 56 per cent respectively in 2019-20 and 97 per cent and 68 per cent in 2020-21. While the Municipal Solid Waste (MSW) treated as against generated has grown more than three-fold from 21 per cent in 2019-20 to 68 per cent in 2020-21. An additional indicator, the installed capacity of sewage treatment as a percentage of sewage generated has seen a minor growth of about one percentage point over 38 per cent.

These trends are indicative of the efforts of the central government towards the reduction of emissions. The Government of India launched the National Action Plan on Climate Change (NAPCC) in 2008, which outlined eight national missions on climate change5. These include sectors such as renewable energy, built environment, water, ecosystem, and agriculture. The NAPCC, since then, has informed multiple policies and programmes across sectors and domains in India. One such impactful programme has been the Swachh Bharat Mission (SBM) launched by PM Modi in 2014. Intending to manage solid waste in urban areas, it identified and deployed the instruments of technology and innovation, IEC and awareness, and capacity building. It sought to create a behavioural change in the citizens through sensitisation and adaptation. The SBM, like other missions launched by the government seek to address multiple goals and targets of UN-SDGs. The success of SBM and its impact was such that it revolutionised solid waste management in India.

A major aspect that sets SBM apart from other missions in India is the massive integration and engagement of the common public and citizens, a large group of people who are only considered a beneficiary in most government schemes and missions. This was only implicit in the first phase of SBM. However, taking into cognizance the good practices that were possible only through the coordination of citizens, community organisations such as resident welfare associations (RWAs), self-help groups (SHGs) and other community-based organisations (CBOs), the engagement and partnership of citizens has become an important and explicit part of SBM 2.0 through the Jan Andolan.

Such initiatives and coordination are possible due to policies and strategies of the governance at the apex. The mobilisation of the community and the transition of the citizens from solely beneficiaries to partners and operators of the plan and programme is a part reflection of the strategies of government and part success of facilitated efforts of the citizens. Coordinated and synchronised efforts of top-down and bottom-up can catalyse the transformation and speed the aim of achieving the vision of the missions.

The past few decades have witnessed a major shift from a top-down approach of governance to a bottom-up one. The emphasis on the bottom-up approach does not have to be one-sided.Essentially, it must seek to create a balance between the needs and demands of the two that inform each other’s actions, while establishing synergies for a lasting impact. While the top-down ensures in providing a robust policy, programming and planning framework, the bottom-up can then function within that framework to customise, innovate and design processes and interventions based on their specific demands. To cater to these specific needs may not be within the scope of the policymakers at the top level, however, they can support these innovations and customised requirements through a substantial enabling mechanism that can only flow top-down. For such a system to work well, these two approaches and their stakeholders and advocates, must interact with each other and arrive at a consensus.

There are multiple advantages of such harmonisation in efforts, and much of these are evidenced in the numerous cases of success and impact through SBM. Such synchronicity ensures the long term functioning and maintenance of the facilities and systems. It is possible through buy-in from local citizens and residents. If innovations in technologies and processes are accepted by the local community socio-culturally and it is considered a part of their social dynamics, the objectives and intents of the policy or mission materialise. A local buy-in would ensure the long-term social, economic and cultural sustainability of the interventions. After a withdrawal of the agency from the setting, for any set of reasons that may be anticipated or unforeseen, the community can work within their constraints and develop solutions that are suited for the system without the support of the external agency(ies). The local buy-in and benefits were also not only limited to certain socio-economic groups. The local governments throughout the nation have presented multiple cases of inclusions of groups across gender and economic spectrums.

As a follow-up in this discourse, the efforts of the local community and governments are to be facilitated by the upstream governance through measures such as capacity building, sensitisation, awareness and training, in addition to capital funding of new infrastructure or retrofitting, policy design, etc. An upskilling of local partners bring more accountability and practicality to the system. It makes them familiar with new processes and technologies which provides handiness in their daily functioning and maintenance.

In addition to this, the emphasis on citizen engagement in post- implementation and handover stages apart from planning and implementation in SBM has provided further confidence in the governance process. The government put in place a large emphasis on citizen feedback through multiple channels within the mission, such as the third-party assessments of Swachh Survekshan.The multimedia engagement and opportunities for the public to voice their opinions through mobile applications, phone calls, and text messages are a huge step-up from previous missions and programmes. The following examples are only a few that provide a picture of the success of the harmony of the two approaches in SBM for emission and impact abatement in solid waste management.

The HSR Layout in Bangalore has been identified as a Zero Waste Community. This was possible due to the stringent observations of the RWA. It ensured that all its residents practice 100 per cent source segregation. This is mentioned in the new rental agreements for any new resident of the neighbourhood.6 Similar stories arise from Mysuru, Coimbatore, etc.

The Amma Unavagam or popularly called the Amma Canteen, a food subsidisation programme of the government of Tamil Nadu, is an example of the success and community acceptance of a government scheme at scale. In Coimbatore, for instance, the Municipal Corporation has installed a biogas plant of 50 MT per day that produces 25 cubic metres of biogas. The waste is obtained from community kitchens, flower markets, vegetable markets etc. in the city. The biogas in turn is used for cooking purposes in the canteens7. Trichy and Jammu use biogas produced from waste to run the community kitchens in slums. This reduces the emissions from conventional fuel usage and simultaneously the leaching and impact from waste reaching the landfills.

Ambikapur Municipal Corporation successfully created employment opportunities for the women in the city all the while managing and safely treating the waste. The success of Ambikapur is taken as a model case among decision- makers where the government created multiple benefits in trying to achieve the aim of a better and liveable city. This was possible through continuous engagement with the locals, identifying their issues and trying to address those through community coordination. The 16-acre landfill site of the city was converted to a sanitation awareness park to sensitise citizens and build their confidence in the service delivery mechanism.

Indore runs 15 CNG buses on the biogas generated from the Bio-CNG plant near Choitram Mandi vegetable market. It produces approximately 800 kilograms of bio-CNG daily, solely from the vegetable waste of the market alone.7 Additionally, Indore has established a plastic waste fuel converter plant that converts plastic waste into fuel. It earns revenue from the sale of the fuel and eliminated 50 per cent of its plastic waste out of the waste stream by converting it into fuel for commercial purposes and tar for road construction.8 A similar plant in Pune processes approximately four tonnes of plastic every day. Instances of community composting and decentralised waste management techniques are possible only because of the initiative of the ULB to promote decentralised systems. It has developed a sense of ownership among residents and led to better and efficient management of waste, thereby reducing the waste reaching the landfills/dumpsites.

Such benefits and stories were taken into cognizance and placed at a given significant status while drafting and designing the SBM 2.0 programme. This shows significantly in the operational guidelines of the mission for the next five years. It is a positive effort in the direction that was set by the previous phase of SBM. It acknowledges that these local citizens are not just the direct beneficiaries of these schemes of upskilling, funding and interventions from a snapshot and single-point perspective but in a long-term view as well due to the value added to the environment of their neighbourhoods and localities. The success of SBM for waste management and reduction of the severe impacts of unsustainable waste management provide volumes of lessons for us to be absorbed at each level of governance and policymaking.

[Acknowledgements – The author is grateful to Ms Paramita Datta Dey, Mr Kaustubh Parihar, Ms Tavishi Darbari and Ms Sonali Mehra from NIUA for their enriching discussions and debates which helped develop this idea and give it shape.]