India has been heading with leaps and bounds in improving e-governance. And, rising technology-powered solutions and systems are evident of the fact. One such system implemented by Uttar Pradesh is ‘Samadhan’ – Integrated Grievance Redressal System (IGRS). Throwing light on the system and its implementation, Andra Vamsi, Collector and District Magistrate, Jhansi interacted with Arpit Gupta of Elets News Network (ENN).

JANSUNWAI (IGRS) is an integrated web-based application system which brings all grievance redressal mechanisms to one platform. Also, the system enables instant and easy communication between the concerned Departments/Officers of the state and citizens resulting in the speedy redressal of their grievances from anywhere and at any time (24 x 7). Moreover, it provides facility for submission of grievances online by the aggrieved citizen as well. The key stakeholders of the project include the Ministry of Electronics and IT (MeitY), National Informatics Centre (NIC), Government of Uttar Pradesh, Local governments in the state, and Citizens.

We can divide the implementation of the IGRS on the basis of two perspectives that are from the paradigm of a citizen aggrieved and from the view of the department/office working for redressal of the grievance.

The implementation of such a system which is based on a digital platform is definitely more transparent in nature and hence increases the trust of citizens on government. Also, the system is efficient and effective in the functioning and provides a quality resolution of the grievance within the defined timeframe which further nullifies any scope of leaving citizens unsatisfied. Further, it reduces the cost (direct cost and time, travel  & opportunity costs) of filing grievances manually in a traditional manner as done before.

With the implementation of the IGRS, there is a reduction seen in effort and time required for management and redressal of grievance at all levels of the Government of Uttar Pradesh, unlike the traditional manner. Further, the digital system has resulted in enhancing the focus of public servants on the resolution of grievance by offering rewards and recognition as well as a streamline flow of work. This has also enabled officers to provide better inputs in policy-making for a reduction in a region or domain-specific grievances.

Since the system has been rolled out and put to practice, there are various benefits which have surfaced with time. With such an effective system in place for the citizen grievance redressal, this increases morale among the citizens and the satisfaction levels of the citizens with the service has been on the rise.

Another major advantage of IGRS is that it is a single web portal for all types of grievances which saves not only the time but also the cost and efforts of the citizens. Henceforth, it has posed as an efficient and effective grievance redressal system. The system is also capable of de-duplication of complaints by tagging up duplicate references which result in boosting up the efficiency of government departments. It is a simple and effective gateway for online lodging and monitoring of grievances. 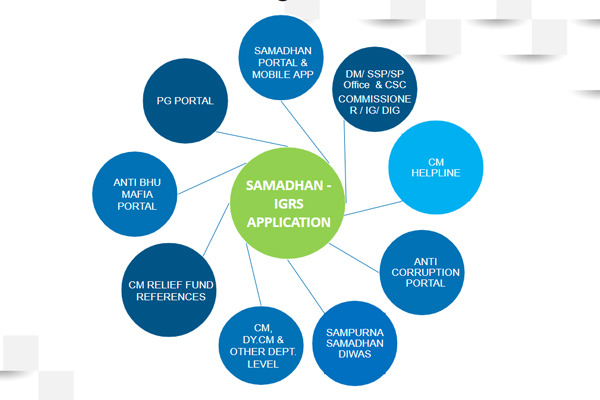 Samadhan – IGRS was developed to provide a transparent integrated monitoring tool and tracking system for redressal of all type of grievances received through various existing platforms like CM Office (Janta Darshan), DM/SP/other field officers/Samadhan Divas, Government of India, CSC/Lokvani Kendra, Departments etc. on a single platform. And, this is visible in the functioning of IGRS.

It all begins when the IGRS receives grievances from various sources like citizens, activists, institutions, commissions, social media, or from elected representatives. The channel or the medium via which the grievance has been received is marked out, for example – CSC, mobile application, website, government offices, or any other channel. Following the channel marking, the data in the grievance filed is processed by the system. Next, the grievance is routed to the concerned officer to whom it has been marked for further processing. Then the grievance heads for marking from the action-taking department. The respective officer takes action on the grievance for its redressal. One redressal is done, it is forwarded to the senior officer who marked the grievance for his/her approval on the redressal processed. At last, the redress is published and notified to the complainant and a feedback option is provided to the complainant to rate the service provided.

Further, there is also a well-devised mechanism for re-opening and reconsidering of the redressal by the officer in case of negative feedback from the complainant. Also, the transparency of the system leaves no scope of fault in processing and hence makes it a reliable and effective system. And, to back that up are the statistics which shows that as of yet a total of 91,415 grievances have been received of which 90,303 have been disposed of. The pending grievances are 1,112 as on date. In the case of negative feedback, the action is mandatorily processed and reviewed by officers one level higher. However, if no action is taken within 15 days, the reference is automatically revived.

Through grading options, an officer can take action on the complainant’s feedback and improve the quality of disposal as well. If the senior officer finds the disposal of grievance insufficient/not satisfactory, then he/she can revive the disposed of complaint.

The COVID-19 pandemic brought along various challenges and managing the huge number of migrants crossing Jhansi to reach other parts of the state or other state was one of the biggest challenges. The district administration actively took effective measures to overcome the situation. The district authorities arranged food and lodging for more than one million migrants at Jhansi.

As far as crowd management is concerned, 44 special trains were operated to take 53,000 passengers from Jhansi to other parts of Uttar Pradesh. The migrants who boarded the trains were provided with food, water and medical assistance. Adequate quantity and quality food were prepared at the community kitchens for the migrant labourers and for the poor and the needy. Further, toys and biscuits were distributed to all the children with the migrants. Moreover, all the migrants were tested for COVID-19 and were provided with apt medical assistance if needed.

Moreover, as many as 75,000 migrants travelling on foot entered Jhansi from adjacent states and districts and were sent to various parts of Uttar Pradesh by 1800 UPSRTC buses. Over 7200 vehicles and 2.5 lakh migrant labourers were officially documented for future references. Also, sanitary napkins were distributed to all the female migrants. The Jhansi administration also distributed leather shoes and slippers to more than 15,000 needy migrants.