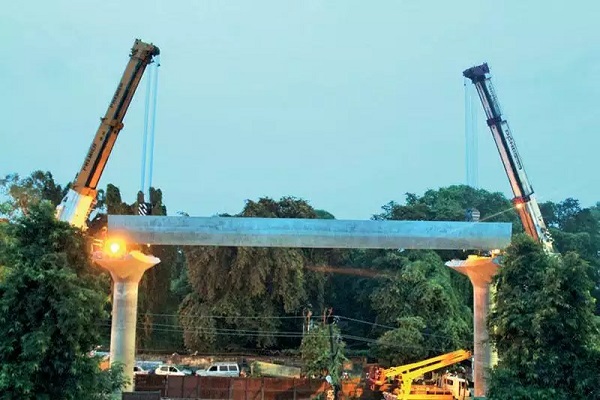 Under the aegis of Uttar Pradesh Metro Rail Corporation (UPMRC), the civil works of the Kanpur Metro project are being executed at a very fast pace and now another major achievement is going to be associated with the project. In the esteemed presence of Rajendra Kumar Tiwari, Chief Secretary, Government of Uttar Pradesh, the first U-girder of the project has been erected for the Metro viaduct on Pillar No. 17 and 18 near IIT Kanpur on the Priority Section of Kanpur Metro project. U-girders provide the top deck of Metro viaduct on which track, traction, and signalling system are laid for movement of Metro trains. Total of 638 U-girders are to be laid on the 9 km long Priority Section (IIT-Motijheel).

Metro construction on a priority section of Kanpur Metro project was commenced on November 15, 2019, in the auspicious presence of the Chief Minister of the State, Yogi Adityanath and Hardeep Singh Puri, Minister of State, Housing and Urban Affairs (IC), Government of India. It is a great achievement that in just eight and half months since start of the piling work for the project, UPMRC has successfully erected the first U-girder on August 11, 2020.

The civil construction work of the project got hampered due to the lockdown on account of the COVID-19 pandemic. Thanks to the efficient strategy of the Metro engineers, all efforts are being made to recover the time lost as much as possible and the construction works have regained the momentum. Construction works were resumed on April 29, 2020, at the Casting Yard and Metro Depot with limited manpower, but the UPMRC has left no stone unturned to bring back the labour strength with strategically sourcing maximum labour locally. Consequently, the labour count crossed the mark of 1000 in just 50 days after commencing work post-COVID-19 lockdown.

On the corridor, construction work began on May 15, 2020, and in a very short span, the civil works have regained the progress. Nearly 60 percent piling work has been completed on the Priority Corridor and 1385 pillars have been constructed so far. Additionally, the erection of 16 double T-girders has also been completed at IIT Metro Station. Significantly, the Kanpur Metro is the first such metro project in the country where double T-girders are being used to prepare the concourse level of the Metro stations to speed up the civil construction and at the same time enhance the beauty of the structure. Construction work of 115 pillars has also been completed in the Priority Corridor. Work is proceeding with full vigour even in the Casting Yard for casting of U-girders, double T-girders, and Pier-caps.

Shri Kumar Keshav, Managing Director, UPMRC present at the site while erecting the first U-girder stated Kanpur Metro project is among the most prestigious projects of Govt. of India & Govt. of Uttar Pradesh. He congratulated the whole team of UPMRC engineers and contractor for their extremely hard work in these difficult times and reiterated the commitment of UPMRC to implement Kanpur Metro project in the shortest possible time and no stone will be left unturned to achieve the same.

The platform that is prepared and placed on top of the piers (pillars) of the viaduct, on which the metro track is laid, is called a U-girder. These girders are pre-casted or pre-fabricated in the casting yard and are then placed with a crane over the pillars at a fixed time (at night) considering the aspect of safety.

Specifications of a U-Girder:

Around 638 U-girders will be used under the Priority Corridor. A girder will have a length of about 27 meters and a weight of about 147 tons. An arrangement has been made to prepare 18 girders simultaneously in the casting yard of Kanpur Metro and a complete set of 6 girders are prepared at one time.