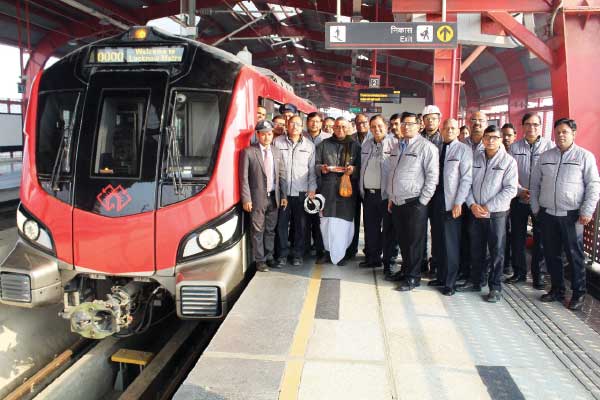 Lucknow Metro Rail Corporation (LMRC), a joint venture of the Government of India and the Government of Uttar Pradesh, which has set a benchmark in the Mass Rapid Transit System (MRTS) of India, celebrated its second anniversary on September 5, 2019. LMRC observed this day as ‘Lucknow Metro Diwas’, dedicated to the Lucknowites. Deputy Chief Minister of Uttar Pradesh, Dinesh Sharma was the Chief Guest for the event.

The official Corporate Film of Lucknow Metro along with unveiling of ‘Lucknow by Metro’ book in the auditorium was launched on the occasion. Prize distribution ceremony was held to felicitate and recognise the outstanding contributions in various fields for the year 2018-19. MD’s Gold Medal and MD’s Silver Medal were awarded to the best LMRC employees associated with Metro Project, Metro Operations and Metro Maintenance. In addition, the best maintained metro station was also be presented with the ‘Best Kept Metro Station’ award by the Managing Director.

To mark the occasion, students from schools and colleges across the city were invited to take part in the technical exhibition and become familiar with the Lucknow Metro’s journey and achievements so far at Sachivalaya Metro station.

In the two years of its commercial operations, the Lucknow Metro has added 1.5 crore passengers with its journey. Remarkably, this figure is more than the five times the total population of Lucknow. Lucknow Metro has successfully achieved the milestone of ‘Zero Accident’ this year as well. Kumar Keshav, Managing Director, Lucknow Metro Rail Corporation said, “We should continue to be a role model in the Mass Rapid Transit System (MRTS) and we dedicate this day to the Lucknowites for their support and cooperation during this journey of 2 glorious years which has added 1.5 crores passengers along the way.”

The Metro trains have travelled 24 lakh kilometers which is equivalent to taking 60 round trips around the earth. LMRC is the first metro in the world to have camera at the roof for continuous pantograph and overhead wire monitoring. Lucknow Metro trains have achieved a commendable feat of attaining punctuality of 99.6 percent in its Metro services.

Lucknow Metro is the first Metro in India to have fire sensors in all electrical cubicles and cars. Braille stickers are installed inside all Metro trains for differently abled persons. There is a provision of long stop button near wheel chair space inside Metro trains for longer stoppage for the specially abled passengers. For the safety and security of commuters live streaming of CCTV images of moving train interiors to centralised control room in Metro Depot is done continuously.

Lucknow Metro is the first Metro in India to have fire sensors in all electrical cubicles and cars. Braille stickers are installed inside all Metro trains for differently abled persons. There is a provision of long stop button near wheel chair space inside Metro trains for longer stoppage for the specially abled passengers.

Lucknow Metro’s North-South corridor (phase 1-A) from CCS Airport to Munshipulia metro station has been completed and commissioned for public services in less than three years. It is, therefore, the fastest metro project which has ever been implemented in the country. In addition to completing the work in record time, LMRC has also set up several records for quality of construction work and safety. There is a long list of exceptional achievements in this regard for LMRC. Lucknow Metro has been awarded with the IGBC Green MRTS Platinum rating for entire North-South corridor (23 km stretch comprising 21 metro stations), ‘Technology Sabha Award’ (2019), ISO 9001:2015, ISO 14001:2015, OHSAS 18001:2007 certification, International British ‘Royal Society for the Prevention of Accidents (RoSPA)’ Award 2018, ‘International European Society for Quality Research (ESQR) Choice Prize’ (2016), ‘International Quality Summit Award’ (2016), Best Metro Project for ‘Excellence in Innovative Designs’ (2016), ‘Dr. APJ Abdul Kalam Memorial Award’ (2016), and many other prestigious national and international awards.

Lucknow Metro creating a bond of compassion with people

Lucknow Metro now gives its passengers an opportunity to showcase their talent at the performing arena at the Hazratganj metro station and take part in singing, dancing and drama performances. Metro Marvel -a new initiative by Lucknow Metro gives people a chance to become a part of the LMRC family and witness the behind the scenes working of Metro Operational & Maintenance System. Metro Marvels will also get special invites and updates of the latest events and happenings at LMRC. Students of schools can now celebrate their birthday inside Metro in groups.

Lucknow Metro now gives its passengers an opportunity to showcase their talent at the performing arena at the Hazratganj metro station and take part in singing, dancing and drama performances. Students of schools can now celebrate their birthday inside Metro in groups.

Lucknow Metro has contributed towards a greener city by making 10-16 percent reduction of particulate matter pollution in the last one year after the commencement of Metro operations. Metro has harvested more than two crore litres of rainwater annually. LED Lights have been installed at all metro stations and inside metro trains of LMRC. Kumar Keshav said, “Lucknow Metro’s Green initiatives like ‘Tree Trans-location’, Regenerative Braking, wheel-washing facility at construction sites etc have paved way for Green approaches to be adopted while the planning of urban development projects.”

He also added that Lucknow Metro Rail Corporation Limited will work as an advisory body for the upcoming Kanpur and Agra Metro Rail projects.

Lucknow Metro safe for both human life and belongings

Commuters often forget their belongings in Metro Trains or within Station Premises but due to alert and vigil metro staff, passengers get back their luggage safely. In the last one year, a total cash of about Rs 4,00,000 has been returned to the Metro passengers. On an average, one laptop is returned by LMRC to its rightful owner every 20 days while one mobile and one purse/bag is returned to metro commuters every third day. On the humanitarian aspect, three people are helped and assisted every month on medical grounds on an average by LMRC staff and security personnel.