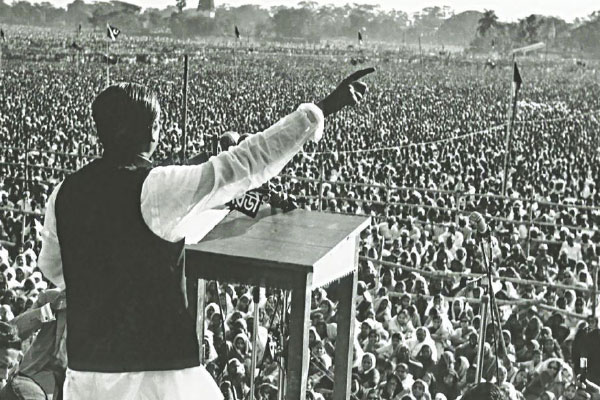 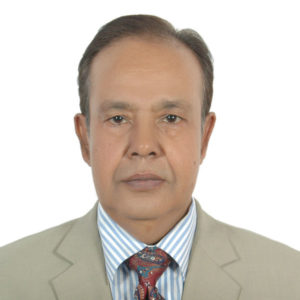 Dr. Jinnat Imtiaz Ali is a former professor of University of Dhaka, Bangladesh. He has developed his career in teaching linguistics and research on phonetics and phonology. Presently he is the Director General of International Mother Language Institute, Dhaka.

Bangla—the language representing the rich linguistic heritage of Bengal—has come to be regarded as a rare force that has united millions of people from all walks of life to come together to uphold their linguistic identity and show the way to the mother language communities of the world how to preserve and revitalise their languages.

Bangladesh is a country of rich linguistic diversity and Bangla is spoken by majority of the population. It is the only country in the world that was established based on the linguistic identity of its people. Bangla played a crucial role during the country’s struggle for independence. The father of the nation, Bangabandhu (the Friend of Bengal) Sheikh Mujibur Rahman, a true nationalist leader, always addressed the people in their mother tongue Bangla. On February 15, 1971, Bangabandhu declared that Bangla would be introduced in all governmental and judicial works, as well as different sectors of public life, whenever his Party would come to power. True to his words, the Constitution of the Republic of Bangladesh was written in Bangla assigning it the highest status. The father of the nation also delivered his speech in Bangla in the General Assembly of the United Nations on 25th September 1974. Taking forward his legacy, his worthy daughter Sheikh Hasina, the Honourable Prime Minister of the country, has also been following the footsteps of her father.

Bangla is also the official language of Indian states of West Bengal, Tripura and Assam. A considerable number of speakers of this language live in different countries of the world.

Bangla belongs to the Eastern Branch of Indo-European Language Family and has its own alpha-syllabic writing-system or orthography derived from the Brahmi script. It is written from left to write.

The historical development of Bangla has been classified under three different eras—Old Bangla (950-1350), Middle Bangla (1350-1800) and Modern Bangla (1800 to the present day). Charyapada, the mystical poems of Buddhism, represents the history of the Old Bangla Period.

The written language of Middle Bangla is basically narrative poetries. Srikrishnakirtan of Baru Chandi Das is a remarkable work of this era.

The 16th Century is also to be mentioned for Baishnabpadabali—the poems enriched with the combination of music and philosophy of Baishnabism. It is famous for another reason, that is, some remarkable Muslim poets composed lyrics in this language during this period.

Literary trend of the 17th Century is different from that of the previous century. Different genres of literary works, called Romantic Pronaya Upakkhan (Tale of Love), were composed by Muslim poets in this era. Sati Mayana (Mayana, the devoted wife to her husband) by Daulat Kazi is the shining example of this kind of literary work carried out during this era.

The 18th Century in one sense is the continuation of aforesaid literary works.

The 19th Century is the age of Renaissance in Bangla language. This is also regarded as beginning of modernism in Bangla language and literature. The epoch radically changed all forms of expression of literary Bangla. This can be mentioned as the age of Renaissance. Some remarkable spirit of the Renaissance are return to the nature, revivalism and extreme emancipation of emotion and those were found first in the literary epic ‘Meghonad Badh Kabbo’ (1861) of Michael Madhusudan Dutta (1834- 1873). He is also considered as the first poet of Bangla sonnet. Madhusudan introduced first blank verse Amitrakshar Chanda in Bangla literature. He also exhibited an extraordinary skill in writing farce plays such as Buro Shaliker Ghare Roan (1859) and Ekei Ki Bale Sobhota (1859). He also wrote poems of sorrows and afflictions for love as spoken by women named Birangona Kabba (1861).

Bankim Chandra Chatterjee (1838- 1898) is also a very remarkable literary personality of this century. He was the first successful novelist, essayist and editor of literary journals. The contents and forms of Bankim’s writing inspired his contemporary creative personalities to develop themselves. That is why Bankim’s contribution to Bangla language is very significant.

One of the prominent literary personalities of this period is Mir Mosharraf Hossain (1847–1911). His career started as the reporter of two local journals Sangbad Prabhakar (1831) and Gram Barta Prokashika (1863). Gradually, he emerged as a distinguished literary personality. He wrote the epic novel Bishad Shindhu (1891) (An Ocean of Sorrow) portraying the tale of martyrdom of Hasan and Husain in Karbala. His other remarkable work is Jamidar Darpan (the Mirror of Landlords), a play that inspired the common and oppressed people to stand against the injustice of the landlords and the British colonial rule.

Rabindranath Tagore (1861-1941) is an exceptional creative personality in the recorded history of Bangla language and literature. He made exceptional contribution to all forms of expression in Bangla. He was a poet, playwriter, dance composer, novelist, short storywriter, essayist and musician. He is the first Bangali poet who was awarded the Noble Prize for literature in 1913 for his book of poems Gitanjali, or Songs Offering to God. He was also endowed with high ideals and very strong social commitment. He influenced Bangla language and literature in his time to such an extent that it can still be found today.

A new trend was introduced in Bangla language and literature in the third decade of the last century, which is known as the Post-Rabindranath period. The poets and writers of this phase were influenced by the World War I and the socialist revolution of Russia.

When India gained its Independence from British rule in 1947 and the SubContinent was divided into two separate countries of India and Pakistan, Bengal was again divided into two separate states of India and Pakistan—West Bengal and East Bengal (the present day Bangladesh). It is ironical that within just two years of the partition, the people of the eastern province of Pakistan, the Bangla speaking majority, faced a grudging attack on their language by the then Pakistani ruling class. Their ill motives and imperialistic attitude were exposed when they tried to impose Urdu as the state language of Pakistan.

It was a clear case of violation of the fundamental rights of the people and an act of linguistic imperialism. People from all walks of life, therefore, strongly reacted to resist such a move. Political leaders, activists, students of Dhaka University and different institutions in Dhaka city all came together to uphold their linguistic identity. The situation gradually worsened and reached the point of no return.

The Great Language Movement was started with Bangabandhu Sheikh Mujibur Rahman, among other political leaders, playing a vital role in strengthening this movement. On February 21, 1952, the world came to witness an unprecedented event in the history of mankind when Salam, Rafique, Barkat and many unknown sons of Bangladesh embarrassed martyrdom while advancing in a procession to uphold the dignity of their mother language. The Great Language Movement of Bangladesh has since then acquired an iconic status among language movements world over. It successfully demonstrated that when people from all walks of life come together, bounded by their love for their mother tongue, they can achieve unthinkable.

The Language Movement of 1952 unleashed the creative spirit of Bangla writers across the country. There was hardly a Bangla poet to be found who did not pen down a poem or two on the Language Movement. Novelists, dramatists and story tellers tried their best to express their emotions in the art forms of their choice. The Language Movement proved to be an enriching experience for Bangla language in every respect.

Bangladesh has marked 21st February as a national holiday to pay respect to the martyrs who laid their lives for the love of Bangla on this very day. Every year, the honourable President and Prime Minister of the country and people from all walks of life, irrespective of their age and social status, gather at the Shahid Minar in Dhaka to pay their homage to the great sons of the soil and sing the following historic song:

It is very rare to find a language community that has the experience of defending the dignity of their mother tongue like ours. Many of us have tried in their own ways to send this message across to the world community. Inspired by this spirit, Rafiqul Islam, a Bengali expatriate living in Canada, wrote on March 29, 1998, a letter on behalf of his organisation named ‘Mother Language Lovers of the World’ to Kofi Annan, the then Secretary General of the UN, requesting him to declare 21st February as the International Mother Language Day under the world body. He believed that it would inspire the mother language communities of the world to preserve and revitalise their languages.

However when Rafiqul Islam did not get any reply from the UN, he decided to contact Sheikh Hasina, the then Honourable Prime Minister of the Government of Bangladesh, so that a proposal to this effect can be submitted by Bangladesh as a member state of the UN. Realising the significance of Islam’s aspiration, the Prime Minister made all necessary arrangements to submit the proposal on behalf of Bangladesh. The proposal was tabled accordingly and it was passed unanimously. To mark this remarkable achievement, a meeting was arranged on December 7, 1999 at Palton Maidan (ground) where Sheikh Hasina declared that an institution named International Mother Language Institute (IMLI) would be established in Dhaka with a view to protecting and promoting the mother languages of the world. She laid the foundation of the institute in the presence of the then UN Secretary General Kofi Annan.

Sheikh Hasina inaugurated the newly built IMLI building on February 21, 2010. Meanwhile International Mother Language Institute Act (2010) was passed by the National Parliament of the Country, and according to this Act the Prime Minister of the Government of the Republic of Bangladesh is the Chief Patron of the Institute. In 2016 (January 12) IMLI got the status of UNESCO Category-2 Institute. Now the Institute has taken up different initiatives for preservation and promotion of mother languages of the world.

Human language is a unique mental and a biological phenomena. Language acquisition of a child begins very early when he or she is in the mother’s womb. The child after his or her birth can understand the phoneme of the mother. It has now been proved by the psycholinguists and neurolinguists that there is no alternative way to start early learning other than in mother language. Bangla is our mother language. I have acquired this speech by birth and it greatly enhances my ability to represent aspects of the world, to think and to communicate with others. So, I am certainly proud of my language.