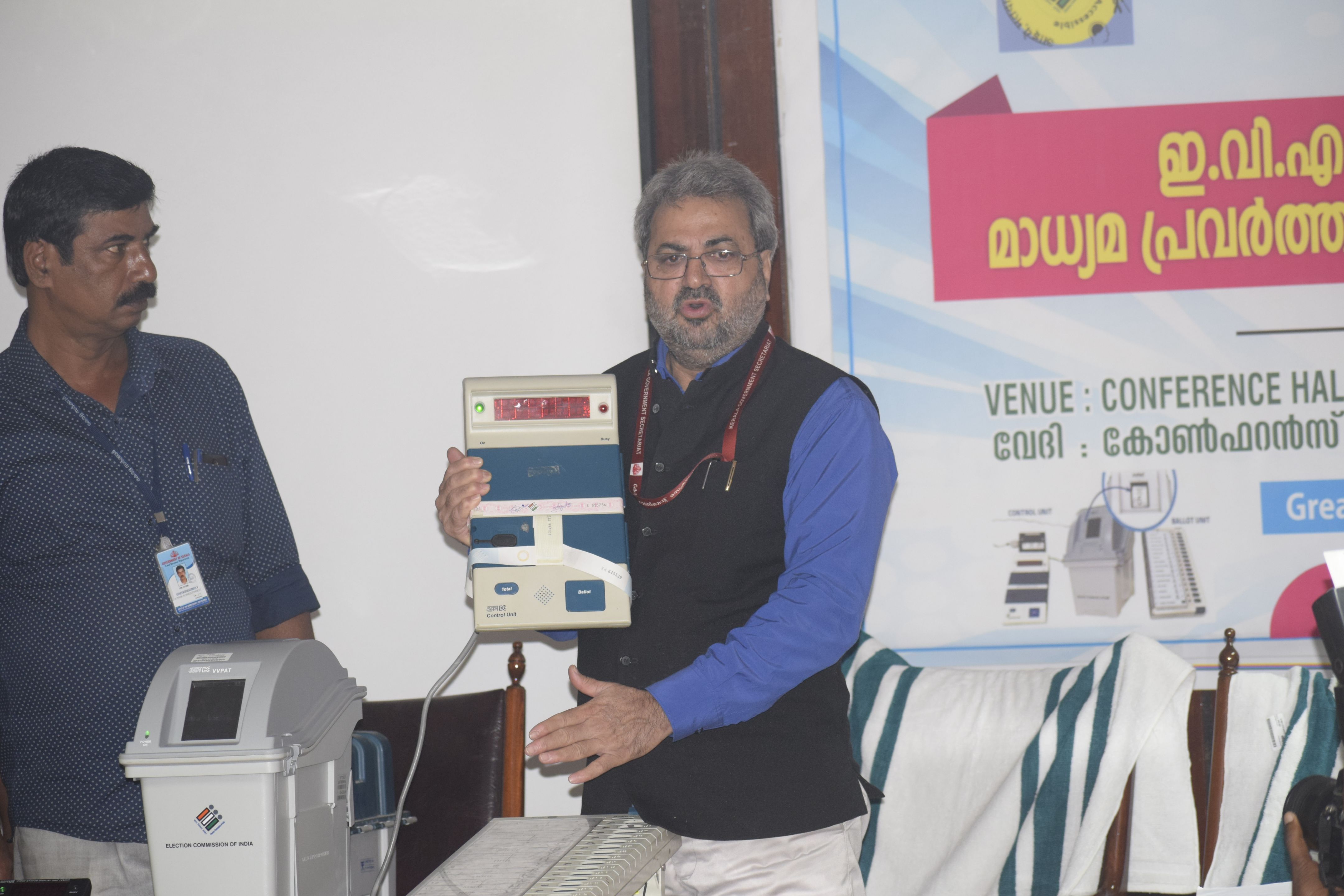 Considering that today’s youth and urban population is always “logged in”, we have been using social media and WhatsApp groups to spread the message that voting is their right and they should come and cast their vote on April 23rd, says Teeka Ram Meena, Chief Electoral Officer of Kerala and Additional Chief Secretary, Government of Kerala, in an interview with Gopi Krishna Arora of Elets News Network (ENN).

With Lok Sabha elections approaching, what initiatives have been planned by the Election Commission to encourage young voters who will be voting for the first time to come to polling booth?

The Commission conducted many camps to allow first time voters to enlist and the last date for the same was extended to March 25th, 2019. Not just that, steps have also been taken to allow voters to track their application status online. The Election Commission of Kerala is taking constructive and innovative steps to ensure that every eligible voter exercises his right to vote and participates in the election process this year.

Our plan is to ensure that no voter is left behind for any reason. Special efforts have been taken to include groups and communities who have been sidelined or excluded traditionally. Through our Systematic Voters’ Education and Electoral Participation program (SVEEP) all district administrations have conducted various programmes that have a youth appeal.

Election Literacy Clubs were set up as a part of spreading awareness amongst students. More than 1,000 electoral literacy clubs are functioning in schools and colleges across Kerala and quiz, plays, flash mobs, music and other programmes were organised to help create interest amongst the youth.

Campus ambassadors were also identified from different educational institutions in the state and they have also been enlisted to help spread the message of exercising one’s vote this year. Competitions were also held on the topic of Ethical Voting for college (documentary creation) and school students (poster creation) and the prizes were distributed on National Voter’s Day, 25 January, 2019.

Campus visits were made by officials and also EVM/VVPAT familiarisation drives were conducted in campuses across the state. Mass runs, bike and cycle rallies, flash mobs, video messages from eminent personalities including our Kerala state SVEEP icons KS Chithra and E Sreedharan (Metro Man) have been publicised through social media.

Pledges were taken and creative campaigns were devised by local administrations to ensure that they connected effectively and repeatedly with the youth in the run up to the election. Social media has been used effectively to reach out to the younger generation this time round.

How is the Election Commission in Kerala using ICT to reach out to common man to create awareness about the polling process, EVMs and VVPATs?

The Commission has also launched a toll free number 1950, as the voter helpline for voters to get authentic information pertaining to their voter registration. The enrolled electors in the Electoral Roll can check the details of their personal information, the Polling Station planned for them to visit on the Poll Day and to know the contact details of Booth Level Officers, Electoral Registration Officers and District Election Officers, by using the Voter Helpline.

Considering that today’s youth and urban population is always “logged in”, we have been using social media and WhatsApp groups to spread the message that voting is their right and they should come and cast their vote on April 23rd. We also identified campus ambassadors and youth icons across all districts who are well known faces and eminent personalities whose video messages were recorded and publicised through YouTube and Facebook.

Not just that we have also created many posters and pamphlets to clarify things to the public and these are being put up in public places and also being distributed to all.

What steps are in the offing to arrest the spread of the recent phenomenon of fake news?

The Election Commission of India (ECI) has directed its state-level bodies to appoint nodal officers to keep an eye on fake news, problematic content and hate speech over social media platforms that violate the model code of conduct of elections.

Social media platforms like Facebook, WhatsApp, Twitter, Google, ShareChat and ByteDance had, in March, agreed to follow a ‘Voluntary Code of Ethics’ during the parliamentary polls. ECI has appointed three nodal officers in New Delhi. The commission further said that a copy of the violations should also be forwarded to the nodal officers appointed by it who would examine the matter instantly and would write to the social media platforms to take appropriate action against the violators, after the approval of its Director General (media).

The commission would examine the content on social media platforms for violations of the model code of conduct or any of its instructions, law provisions or court orders related to election matters, the daily added.

The ‘voluntary code of ethics’ is expected to help the Election Commission take down ‘problematic content’ and is an attempt to bring about transparency in political advertising on social media platforms, during elections.

According to the daily, almost a third of India’s 900 million voters are active on social media platforms. This makes it (appointing nodal officers) one of the biggest-ever attempts to monitor Internet content.

We have set up a Media Certification & Monitoring Committee (MCMC) at the state and district level to monitor media content and also for pre-certification of publicity and ad materials of candidates and parties for use in media.

How do you plan to empower common citizens to report the breach of model code of conduct?

The ECI has launched an innovative and user-friendly mobile app called cVIGIL (Vigilant Citizen) for citizens to report Model Code of Conduct and expenditure violations and which will be a fast track complaint reception and redressal system during the elections. cVIGIL can be used for reporting violations from the date of notifications for bye-election/ assembly/ parliamentary elections. The uniqueness of the app is that it only allows live photo/ video with auto location capture from within the app to ensure digital evidence for flying squads to act upon in a time bound manner.

By using this app, citizens can immediately report on incidents of political misconduct within minutes of having witnessed them and without having to rush to the office of the returning officer. cVIGIL connects vigilant citizens with District Control Room, Returning Officer and Field Unit (Flying Squads) /Static Surveillance Teams, thereby, creating a rapid and accurate reporting, action and monitoring system. All that is required, is to click a picture or a two-minute video of the activity violating MCC and describe it shortly, before registering the complaint. GIS information captured with the complaint automatically flags it to the concerned District Control Room, permitting flying squads to be routed to the spot within few minutes. The app has inbuilt features to prevent its misuse.

What are the poll challenges in Kerala?

There are several challenges in Kerala which might bring some hindrance in the poll process. These include threat of Maoist activities in certain areas like Wayanad, Malappuram and Kannur, Kozhikode and sensitivity of Sabarimala issue which has the potential of causing disharmony among the people to begin with.

Due to the floods there are certain polling stations also which were damaged and they are under repair. There are some areas that have been left inaccessible due to water logging in Alleppey, Ernakulam, where you cannot reach by road and polling materials have to be transported via boats. Also in certain other places like Idukki where there is limited access in tribal populated areas where we face challenges.

Kannur is a highly sensitive area where the intense political rivalry leads to political violence and problems. Political rivalry is high and it is a closely contested election always especially between the UDF and LDF.

Which key poll reforms have taken place in the past one decade and which reforms you think can be expected to see in the near future?

There have been various reforms in the last few years. Some of the important ones in recent times have been introduction of None of the Above (NOTA) which allows a choice to reject all the candidates; restriction on exit polls; ceiling on election expenditure, which has been increased to Rs 70 lakhs in bigger states; disclosure of election expenditure; making political parties to report any contribution in excess of Rs 20,000 to the EC; declaration of criminal antecedents of candidates; barring of persons charged with heinous crimes: Sec 8 (4) of RPA from contesting elections for the next six years; compulsory declaration of educational qualification by a candidate contesting elections; expansion of the scope of RPA section that concerns with asking votes in the name of religion; setting up of Media Certification and Monitoring Committee (MCMC) at the state and district level to monitor media content and also for pre-certification of publicity and ad materials of candidates and parties for use in media; Election Commission of India’s Model Code of Conduct; creation of a fully computerised database of electors, and video recording of the polling and counting procedures, among others.