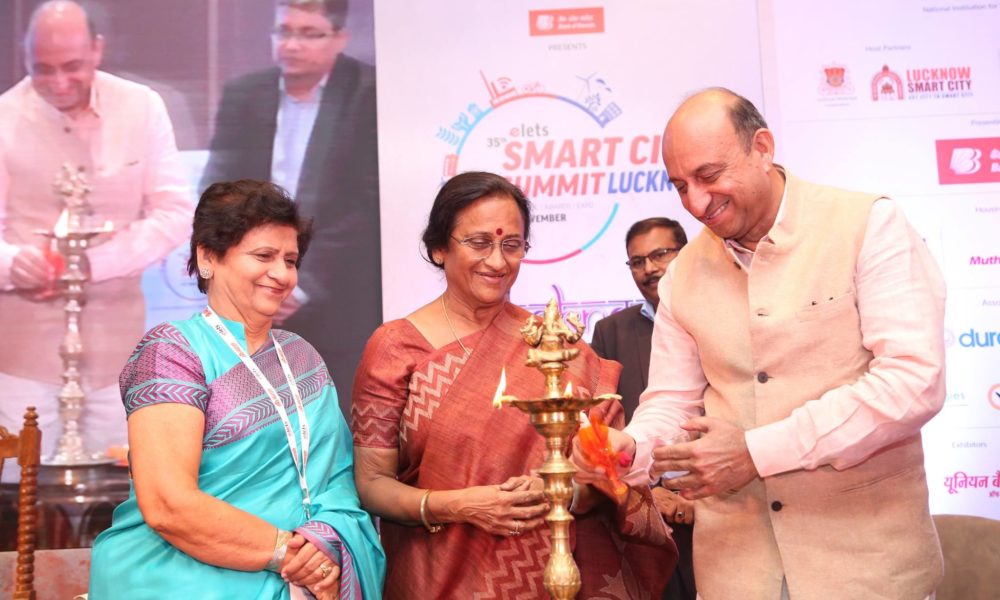 Nurturing the heritage status of Lucknow to be a priority for all Smart city projects being undertaken by the Lucknow administration, said Prof Rita Bahuguna Joshi, Minister for Tourism and Family Welfare, Govt of Uttar Pradesh, at the 35th Smart City Summit held in Lucknow on Friday.

“While transforming the historic city of Lucknow city into a world-class Smart City, we are focussing on developing the city into an International culture and heritage hotspot. To this effect, a number of Smart City based initiatives are being executed. Since religious tourism is UP’s forte, along with a thrust on building Smart Cities, we are revamping all famous spiritual places,” said Bahuguna.

Building upon the hope that deliberations carried out by all stakeholders, including with various industry players and States representatives would open vistas for mutually beneficial win-wins, Suresh Kumar Khanna, Minister for Urban Development, Uttar Pradesh, said, “Uttar Pradesh is on the path of creating a conducive environment for sustainable development. Sincere efforts are being made to make all cities of Uttar Pradesh among the best in the country. The Government is ready to adopt any technology that is beneficial for the State and wants all municipal corporations to be self-reliant in bringing a qualitative change in the lifestyle of people living in all the cities.”

“The pleasing thing about UP’s various Smart City missions is that along with a thrust on modern technologies, equal emphasis is being given on maintaining the cultural heritage of the various cities.  Under this, many places in Area Based Development (ABD) region are being given a makeover. The work of preserving and utilising the heritage buildings in Chattar Manzil, Roshan Ud Dolah Kothi, Kothi Gulistan-e-eram and Darshan Vilas Kothi and Kaiserbagh area is going on in full swing.” said  Sanyukta Bhatia, Mayor, Lucknow.

Under our ‘Solid Waste Management’ plan for the city, smart community bins are being set up and door to door collection has been started in 107 wards, Garg added.

Mentioning many key projects being envisioned by NITI Aayog, under its future template for Smart Cities in India, S K Singh, Director Urban, NITI Aayog, Govt of India, opined, “Implementation of Smart cities would go a long way in changing the urban landscape of India. NITI Aayog is driving the key areas which would act as key enablers in this pursuit.”

“Finland is an active partner of India in many of its Smart City projects and in coming times, we are going to enhance our collaborations with various Indian states”, said Erik af Hällström, Minister Counsellor/Deputy Head of Mission, Embassy of Finland, while presenting an international perspective on Smart Cities.

In a bid to improve the Smart City ecosystem and take stock of the progress made by various Smart City projects in Uttar Pradesh, Lucknow Municipal Corporation and Lucknow Smart City Limited, in association with Elets Technomedia Pvt Ltd, organised the 35th Smart City Summit on Nov 30th, 2018, in Lucknow.

The unique congregation of top decision makers from Government and Corporate served as an ideal platform for all the stakeholders from the Smart City ecosystem to deliberate on various Smart City projects and formulate effective policies in this regard.

The Key themes, deliberated during the summit, included: