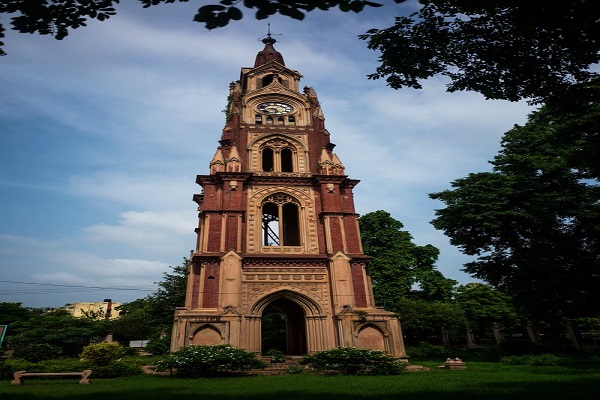 Courtesy a massive citizen involvement, Aligarh was recently chosen for being developed as Smart City. The Aligarh Municipal Corporation organised over 24 meetings with various groups including NGOs, trade groups, Exporters Association, Aligarh Muslim University, Women’s Group among others. Now, the endeavour is to develop Aligarh as one of India’s best cities, writes Gautam Debroy of Elets News Network (ENN).

The moment Aligarh was included in the list of Smart Cities by the Government of India, residents of this famous Tala Nagri (the City of Locks) turned ecstatic, hoping they will soon avail far better civic amenities.According to Santosh Kumar Sharma, Aligarh Municipal Commissioner, they are determined to make Aligarh, one of the best cities in India”. “We are confident that we will be able to implement all the smart city projects in a time-bound manner.” In June, the Ministry of Urban Development in its third list announced Aligarh as a Smart City. Along with Aligarh, the Jhansi and Allahabad from Uttar Pradesh also found place in the list of 30 new cities announced by the Centre as part of its Smart City Mission, launched in 2015.

Municipal Commissioner Sharma said,  “Our jobs and responsibilities have increased after declaration of Aligarh as a smart city. We are leaving no stone unturned to ensure effective execution of the plan and project to make it a city that lives up to people’s hopes and expectations.” Under the chairmanship of Divisional Commissioner (DC) Subhash Chand Sharma, Special Purpose Vehicle (SPV) for Aligarh Smart City has been formed. The Municipal Corporation and SPV have already undertaken “bidders meet” process to form Project Management Consultant (PMC) for project implementation. Corporation official said that the moment PMC is announced, the authority will start floating tenders for various components of Smart City Mission.

“We already had bidders’ meet for PMC… we are expecting to form the consultant group at the earliest,” said Sharma. A core area of five square kilometres, comprising old and new city areas, has been demarcated for the Area Based Development, which will focus on giving people uninterrupted electricity supply, metered water supply, proper drainage facilities, ensure recycling of waste water and solid waste management. Other key elements of the plan are rain water harvesting, ground water recharge, pedestrian-friendly footpaths, traffic management, innovative use of open space, water management, industrial development and sustainable socioeconomic development.

The pan-city proposal will cover the remaining areas of the city. The vision of Aligarh Municipal Corporation is to make Aligarh a Mukammal Ashiyan (Alishan Ali-E-Gar or a perfect house). This represents a high quality of city life which has smooth access to basic infrastructure, clean and green energy as well as has peaceful environment.

A total budget of Rs 2,566.86 crore has been allocated for the Aligarh smart city project of which Rs 2,090 crore will be spent on area-based development. The remaining Rs 476 crore to be spend on facilities in the pan-city proposal. As far as availability of funds is concerned, the Union Ministry of Urban Development has said that there is no shortage of funds for implementation of Smart City proposals. “For future requirements, we are encouraging cities to explore innovative financing mechanisms, such as municipal bonds and use of value capture financing (VCF) tools.

The Ministry is actively supporting cities by providing technical support for credit rating, transaction advisory services for issuance of municipal bonds, and review of VCF tools that can be used,” Dr Sameer Sharma, Additional Secretary, Ministry of Housing and Urban Affairs, Government of Indian told ENN.  Nominating a PMC is the top most priority at present for Aligarh Municipal Corporation. “We are working according to a full-proof strategy for project implementation. We are expecting selection of the PMC at the earliest so that the project of implementation process starts soon,” said Rajesh Kumar, Tax Superintendent of Aligarh Municipal Corporation.

The biggest challenge for the AMC, however, is to ensure coordination among different government departments and achieve single-window clearance for citizen services as part of e-governance. “We are working in this direction also so that getting clearance for any project is done without any hassle,” said Kumar.

To tap the potential of the traditional lock industry, authorities here are planning to make Aligarh an International Lock City. Interestingly, the skills of those associated with the decades old industry will be sharpened and a plan will be drawn to promote the sale of their products in the international market. Aligarh locks are exported across the world. In 1870, Johnson & Co was the first English lock firm in Aligarh.

In 1890, the company initiated production of locks on a small scale. A few foreign countries including Germany, Belgium and others have shown interest to support the authority in the project implementation process and make Aligarh a world class city. The Municipal Corporation has also signed memorandum of understandings with the Aligarh Muslim University, Pune-based C-DAC and RCEUS (regional centre for urban and environmental studies) as knowledge partners in the project. With a population of 12,40,896, Aligarh is one of the largest cities in Uttar Pradesh.

Aligarh district is divided into five tehsils, namely Kol Tehsil, Khair Tehsil, Atrauli, Gabhana and Iglas which are further divided into 12 blocks.It is also famous for brass hardware and sculpture. At present, the city holds thousands of manufacturers, exporters and suppliers involved in the brass, bronze, iron and aluminium industries.

This historic city also carries much more significance from the pre-Independence era. Many Nationalist Movements originated from Aligarh including Khilafat Movement. The city, viewed as Mecca of education among many Muslims, is home to Aligarh  Muslim University, an internationally recognised education place. The AMU aims to introduce western ideology and education to the Muslims here. The AMU always plays a pivotal role for an overall development of Aligarh.

Dr Nadeem Khalil, Urban Specialist from Aligarh Muslim University, said the AMU is a world famous organisation and officials will have the opportunity to utilise the knowledge of its experts for the smart city projects.

“We have developed several projects related to urban water and waste water treatment…it will be of great use if all these projects could be implemented in Aligarh smart city project,” he said. The selection of Aligarh as a Smart City was attributed to a massive citizen involvement too.

The corporation had organised more than 24 meetings with various groups. The groups include NGOs, Vyapar Mandal, Exporters Association, Aligarh Muslim University, Women’s Group, Industrial Estate Association, Doctors Association, Lawyers Association, Nagar Nigam Councillors among others. In total over 7,000 people were engaged through smart city conclave, said municipal corporation official. There is, however, anticipation that big corporates are hesitant to do business and investment in Aligarh “due to its socio-political environment”.

Aware of such issue, Aligarh Municipal Corporation has also adopted several “strategies” to woo the private sector. “We are ready to provide all possible help to the organisations and people who are interested to invest in Aligarh,” said Municipal Commissioner Sharma. The Corporation is giving emphasis on six sectors including transportation, safety and security, water availability, assured electricity, solid waste management and housing situation.

Waste management and Swacchata Mission are two very critical issues that the Corporation is fighting with. Though, the Municipal Corporation has already assigned a private organisation for door-to-door collections of wastes and its disposal, the works of the company are under scanner. “Under the Swacchata Mission we are trying to setup Shochalay (toilets) in maximum possible areas of the city. We are also doing a massive awareness campaign in this connection,” said Municipal Commissioner Sharma. Interestingly, Lucknow, Varanasi, Kanpur as well as Agra have already been included in the smart city list.

Uttar Pradesh Chief Minister Yogi Adityanath has said his government will make every effort to promptly carry out works for the development of the cities selected under the Smart City project. The State government has already initiated the move to include five more cities – Meerut, Rae Bareli, Ghaziabad, Saharanpur and Rampur – in the smart city list. The Smart City Mission was launched with the aim of transforming 100 Indian cities by 2019-20. Accordingly, the Centre provides Rs 500 crore to each city over a period of five years for implementing various projects.

The Uttar Pradesh government is also determined to make its cities smarter. Chief Minister Adityanath has said he will not tolerate laxity in development works under this mission. “These works, when completed, would definitely bring qualitative improvement in the condition of these cities and also provide world class facilities to people esiding there,” Adityanath recently said.