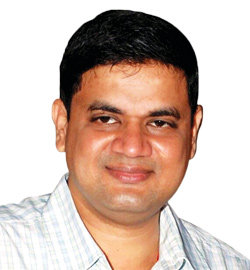 Under the leadership of a Chief Minister, who rigorously promotes technology for socio-economic development of the State, the Andhra Pradesh IT Department has become an early adapter of technologies. G S Phani Kishore, Special Secretary, IT, Electronics & Communications Department, lays out the IT road map for the State before Sudheer Goutham and Arpit Gupta of Elets News Network (ENN)

How can Andhra Pradesh stand up to become the leader in IT and eGovernance to reach out to its people?

Information Technology is no more limited to IT and ITeS alone. We have trifurcated the entire IT Department. The first pillar is IT and ITeS, the traditional strong line, and the second one is the innovation startup ideation incubation. We have created space for innovation society in Andhra Pradesh. We are about to sign an historic MoU with the IC2 incubator of the University of Texas in Austin, which is the biggest incubator in the world. They are going to set up an incubation facility in Tirupati. This is the first time we are going to have that kind and scale of incubation activity happening in the State. We have also signed an MoU in Boston with MIT to have first fab lab in Asia and this will come up in Vizag.

All this has been possible because of renewed focus on the way the things have to be done. Under the initiatives of these societies, which have actually taken the control, we as the government have taken the role of the facilitator. We have also created a society under the supervision of CEO IT and ITeS for promotion. We have hired an experienced person from the industry to execute the plans of promoting IT and ITeS. Intention of getting people from the market is because they know the pulse of industry better and also about what is happening in the market. We have visualised Vizag as IT and ITeS capital of the State, while Incubation and Startup will be in Tirupati.

As the third pillar of IT Department, we have created eGovernance Society in the new capital region of Vijayawada. With the launch of ePragati, for the first time we have created State as an entity. We have planned State Level Enterprise activities. Keeping that in picture, we want to create hubs. Singapore and Hong Kong, two small nations, don’t have as many hubs as we are planning to have here. It’s `2,540cr project and not a single state in India has actually ventured in this kind of project. We will be 10th nation state in the world to have experimented this kind of project. The entire project is on PPP model. We are about to launch RFPs. Target is stiffer as we have to deliver the project in 24 months. Technocrats, developers and the people, who are willing to participate in the story and glory of Andhra Pradesh, this is the time for them to come, collaborate, join and invest in one of its kind of huge project in the world.

I can proudly say that Andhra Pradesh being the early adapter of technology, it is an implementing state, while most other states in the country are still thinking of doing it. Through various technology initiatives like ePragati, Aerial Fiber Grid and others, we are working towards taking the government to the doorsteps of the citizens in line with a campaign – “Maa Prabhutvam Mee inti Mungata”, meaning “Our Government at Your Doorstep”.

In a first, the Andhra Pradesh Government is set to provide access to Internet and broadband connection even to the remote areas of the State through Aerial Fiber Grid. This will be a key step in taking all the eGovernance services to the rural household. The Aerial Fiber Network rides overhead on the existing electricity poles. In the first phase, connections will be provided to 1.3 crore households in the State. There are 3.6 lakh poles and 2,600 substations spread around 23,000 km. Our government is working to complete rolling this out at the earliest. Andhra Pradesh Government will develop Vizag as an IT hub, providing plug-and-play facilities.

How does ePragati initiative of AP Government, considered a role model in the Government Enterprise Architecture in India, serve the citizens?

ePragati will enable people in the State to avail government services and schemes of 33 departments and over 300 agencies under one roof. It revolves around seven missions, five grids and five campaigns, which include Aerial Fiber Grid (to all gram panchayats), AP State Data Centre (to host all the data and applications), e-Highway (to seamlessly connect all the departments digitally), People Hub (to house all the socio-economic data of the citizens of the State, which will be used to implement welfare schemes and development programmes), Lab Hub (that contains details of all types of land parcels in the State), Dial AP (a unified contact/call centre that the citizens can use to access a wide range of services), e-Learning platform (that provides learning and online material/ education aid to enhance quality of education), Social Benefits Management System (that includes all benefits schemes), APcan (comprehensive system for management of cancer), mSeva (a platform for providing a wide range of citizen services on mobile), e-AgriMarket (a platform that enables farmers to sell their produce online to get the best price) and e-Panchayat (enhances efficiency of Panchayati Raj institutions).

Tell us about the ‘certificateless’ governance that the AP Government has announced to roll out in the next few months.

Unlike the conventional way, where an individual—be it a farmer, student, employee, employer or any citizen— needed to carry certificates or government documents, certificate-less governance will do away with it. Aadhar will be the single source of information for all of it. Issuing of routine certificates, such as residence, income, nativity, date of birth, caste and land documents will be stopped. In the next few months, government will stabilise the ‘People Hub’ and ‘Lab Hub’ and most of the linkage and authentication will be done. As part of certificate-less governance, the Revenue Department has already done away with routine certificates. If any department or person needs a certificate, they can simply send a query to the data hub.

What security measures are taken when the entire data of an individual is available online?

Chances of data leakage is nil in the system. Bulk data is not available to the end-users. They can only access by feeding a particular number or name and then get the details. Besides, a government official concerned or sanctioning authority of a pension or fertiliser subsidy can access the data to know the eligibility of the applicant. The public data available with various departments can be accessed by anyone, depending on how much a particular department would share. We don’t have biometric data with us. Even the Smart Pulse survey will not collect biometric data.