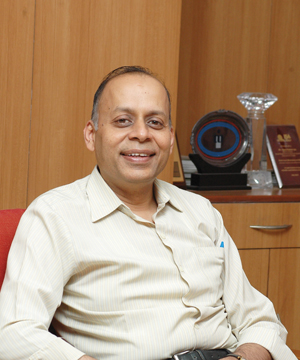 Give us an overview of the Electronic System Design and Manufacturing (ESDM) sector in India.

In the electronic sector, the demand is growing in excess of 20 percent. For some products, it is also growing at the rate of 30, 40 or even 50 percent. Most of these demands are met through imports as our domestic capacity for design and manufacturing is very low. We estimate that by 2020, our demand will be in excess of USD400 billion and the imports will exceed USD300 billion, making it the single-largest item of import in the country. The situation is alarming, as this size of imports will be unsustainable for our country.

Today, more and more sectors are going electronic; even traditional sectors like electrical and mechanical are becoming electronic. Yesteryear’s hydel and thermal power generation are making room for solar photovoltaics, incandescent bulbs have given passage to the new-age LEDs, and medical equipment, cars and their devices, etc, have all gone electronic. However, the more electronics spreads to various areas of our life, the more it adds to its potential to disrupt normal life and safety. For example, everything in the railways is electronic today; so, if someone hacks the system, its ripple effect would reach far and wide.

It could be a potent threat to the security of our systems as well?

Very true. The security of systems is a major concern. We cannot trust that imported chips will ensure the level of security we need… that way we are vulnerable to attacks of very sophisticated, high-tech dimensions. But having an alien know your secrets is a hard fact today across the sectors, including Defence and Home ministries in the government. Reliable electronics manufacture within the country is imperative today. Earlier, we assumed that we will be importing, but now we have realised that it is a big problem; even though the import bills skyrocket, we are still left with mortgaged cyber security due to imported chips.

Today, the IT is a USD125 billion industry, and it has substantially changed the face of India. It created 2.5 million jobs…rather households. Electronics has an opportunity to create a USD400 billion and 28 million jobs. That is, while on one hand we have a storehouse of opportunities, on the other, it’s the looming unknown danger. That, in short, is the electronics sector today.

But then how do you propose to address the problem?

We have taken several initiatives in that direction. The schemes that have been approved need to be implemented effectively. But more needs to be done and more policies need to be formulated to tackle the issue. Also, we need to market India. We do not have adequate implementation mechanism created to execute all the policies formulated so far. Electronics is not a departmental but a national issue; so, we need a national mechanism to handle these issues… We need to create that brand for India.

What needs to be done for implementing the existing policies, and what must be kept in focus while formulating new policies?

There is a gap today. We have created many policies; some of them are modified incentive package where we have created 25 percent incentive and it is being welcomed by the industry. But there’s a need for a mechanism to mobilize and appraise proposals, sanction those and then disburse the money. We lack there, and instead created a scheme called Electronic Manufacturing Cluster Scheme, wherein it provides for setting up of state-of-the-art clusters. We have received several proposals, but again we need a mechanism to address those. We are talking of setting up an Electronics Development Fund, but there is no mechanism to execute it. We have a scheme to promote domestic manufacturers of electronics, but we do not have a mechanism for that. We have implemented a scheme for safety standards, with inadequate supporting mechanism.

Most of the safety standards have been mandated in the electronics sector, but we must create some institutional mechanism for monitoring as well. However, we have launched eight to 10 major initiatives to bridge the gaps, like creation of vocational skills in electronics to empower people. About one lakh people are already getting trained. Actually, all these schemes have started in the last two years, so full-fledged support systems are yet to evolve. Incidentally, we are also building two national centres of excellence to inform and educate people in the domain.

We have created policies, but there’s lack of execution mechanism. We talk of setting up an Electronics Development Fund, but there is no mechanism to execute it… We have a scheme to promote domestic manufacturers of electronics, but do not have a mechanism for that. We implemented a scheme for safety standards with inadequate supporting mechanism…

Of late, there’s been a heightened sense of awareness regarding ESDM. Share some of the key achievements.

Creation of semiconductor fab is the first landmark achievement. The total investment involved is about 63,000 crore. We have received about 40 proposals involving investment about 14,000 crore. Under the cluster scheme, we have received several proposals, out of which seven have been approved for greenfield electronic manufacturing projects in the country. Several others are in the pipeline…those would create small townships.