Home Interview e-Governance is for the people, by the people, of the people
Facebook
Twitter
WhatsApp
Linkedin 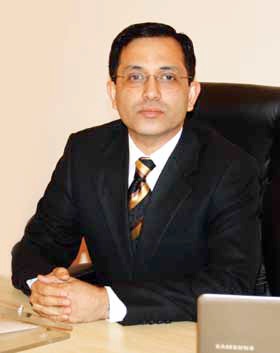 The benefits of SDC cannot be fully reaped if the State Wide Area Network is not commissioned. What is the status of State Wide Area Network?
In case of State Wide Area Network, somehow in Jammu & Kashmir, the process of bidding started in 2010, but it had to be called off because at that point of time it was thought that it is better if the System Integrator and the Bandwidth provider are integrated in the same Request for Proposal (RFP). The RFP was redesigned and floated last year and now we have already closed the bid process and the evaluation has also been done. Now the competent authorities within J&K are about to approve of that bidding process and then we will have to approach the government of India for final funding.

So we are at the last stage of selecting the vendor and getting the work on SWAN started. In my view, the final approval of the Government of India should come in the month of end of April 2013. After that the process of implementation of State Wide Area Network will take off, and in not more than 6 months time, SWAN should be operational at the DHQ and the State Headquarters level and at many of the blocks also, that are easily accessible. You are aware that many of the Blocks are situated in remote areas, and the state of J&K is mountainous. Also some of the areas are located close to the line of control. So we require certain special measures for implementing the SWAN.

It also becomes costly for our private partner to implement in those areas. In such areas we are envisaging that a little bit of more time would be required to establish the point of presence up to block level of these areas. But in all probability, by December 2013 we are hopeful that about 80 percent of the area in the State will be covered by the State Wide Area Network. This will help us a lot in starting G2C kind of services, because the data centre is ready by now and with SWAN we are going to have a very seamless kind of integration for providing of several landmark services.

We are having the system of two capitals in the Jammu & Kashmir. Srinagar is capital city for six months and Jammu for six months every year. If we had e-Governance in all the departments the important papers of the government could be stored online and they would not have to be transferred physically from one city to another. Don’t you think this will result in huge cost saving for the government? It will. We are now endeavouring to create aculture of online work in the State. In IT Department we have already taken the initiative of archiving the records electronically. A pilot project in this regard is already on in the IT Department. In the Higher Education Department also we have started this kind of project for archiving of the records. This way we will beable to save lot of costs that are involved in transporting all those files from one place to another physically.

Many of these files do not need to be kept in the physical form, as these are only for archival purposes. The electronic records kept in an authenticated way are as good as physical files. Please also remember that in Jammu & Kashmir we have already issued the Electronic Service Delivery rules, and under these rules we can also mandate that if the digital files are authenticated under the digital signature of an officer of a particular rank, then those files are as good as physical files. As the process of digitising the files has just started, it will take some time to fully develop it.

This knowledge sharing online, document sharing online, will surely lead to better understanding amongst the departments. It will improve their understanding of one another and facilitate a smoother functioning in thegovernment. We have already started work on this portal, and we are sure that in six month’s it will be up and running. This project will also serve the purpose of putting the spotlight on the successful projects of any particular department so that it can be replicated in other departments. If implemented properly, the Knowledge Management Portal can be a game changer for e-Governance in the state.

When you are putting so much of government data online, then you also have to be concerned about the issue of cyber security. What kind of cyber security measures are you implementing to ensure that government data that is being put online is safeguarded from malicious attacks?
Cyber security related concerns are there all over the world, but many advanced countries have already moved their work in the online space. Even in our own country, a large number of states have started using IT systems in a big way. The standards for secure transactions and security have been set by the Government of India. Online transactions are now fairly common in government departments, banks, private companies and the end users. Of course, we need to have adequate cyber security systems in place, while we continue to bring more and more of our work in the online domain. The systems that are being developed in Jammu & Kashmir will have the same level of security that the government departments in other states presently have. The State Data Centre and other hardware facilities are completely secure.

What is the level of digital literacy in Jammu & Kashmir? Are you taking adequate capacity building measures to ensure that there is sufficient digital experience for e-Governance to really take off?
For e-Governance to succeed there are two levels of digital literacy that are required. One is that the government departments should have sufficient digitally trained manpower to run the applications and provide the necessary services to the citizens. The second level of digital literacy has to do with the training of the citizens in computers and Internet. After all, it is the citizens who are going to use the onlineservices from the government, so if they are digitally literate, they will be in a better position to take advantage of all the measures that are being taken. In my opinion the perception that the people in Jammu & Kashmir are less digitally literate, is a mere fallacy. People in this state, especially the younger generation, are well versed in the use of computers and Internet. Even in remote and rural areas you will find large number of people who are digitally literate. The only problem is that we have not been able to penetrate all areas of the State in terms of the State Data Centre, the SWAN and connectivity related issues. Once these facilities are fully operational, you will find e-Governance gaining popularity in the state within no time. To give you an example, we are now implementing many online services in the management of electoral rolls and generation of voter ID cards. Once they are rolled out, there is going to be huge number of takers for these services.

How long will it take for the bulk of G2C services to get launched in Jammu & Kashmir?
Most of the G2C services will start operating once SWAN is in place. But currently with alternate sources of communication we are trying to launch several applications for health department, elections department, employment department, labour department and few others.

e-Tendering is known to bring a lot of transparency in the functioning of the government. What kind of work are you doing in the area of e-Tendering?
e-Tendering is one of the most successful e-Governance projects in Jammu & Kashmir. Unfortunately the success that we have achieved in e-Tendering is not well known to people outside the state. Most departments in the state are now using the e-Tendering system. The Urban Development Department, the Public Works Department, the Irrigation Department, and many other departments are tendering through e-Tendering. This is resulting in lot of transparency and is also bringing substantial reduction in the operating costs of these departments. Participation in tendering through e-Tendering in the state is now universal. No one can be stopped from participating in a government tender, because it is an e-tender.

In Jammu & Kashmir in particular we have had some issues regarding Facebook. At times government departments have to block some malicious links on this social network. In your opinion should government departments get involved in blocking Facebook pages, or should just ignore the few malicious links that crop up?
These social media platforms have the power to work like dominos. Any wrong information posted in these social networking sites can lead to a lot of law and order problems in sensitive states like Jammu & Kashmir. Blocking of certain pages on Facebook is not confined to India only. Many countries in the world have been blocking Facebook pages from time to time to guard their national interests. Malicious comments posted in Facebook can hurt the religious sentiments of certain group of people. In such cases, there is no alternative except for blocking of these pages. Ultimately we are living in a society where we can’t grant anyone to enjoy total freedom of expression for abusing anybody. In public interest, certain curbs have to be placed on freedom of expression. The freedom of expression means that people have the right to express themselves in a civilised manner