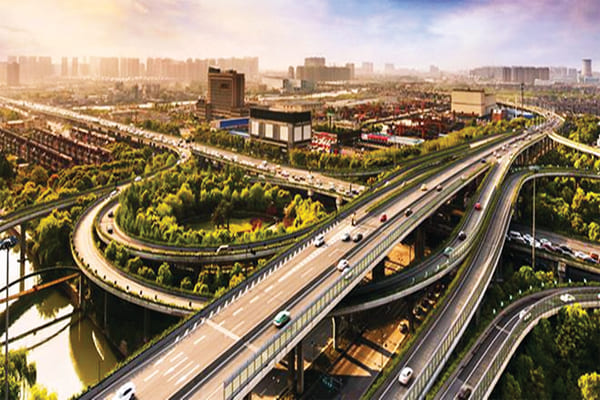 The industrial corridor, connecting the national capital of Delhi and financial capital of Mumbai, holds a big significance for Rajasthan and it is gradually becoming the State’s industrial lifeline, observes Elets News Network (ENN).

The Government of India is establishing a Dedicated Freight Corridor between Delhi and Mumbai, measuring 1,483 km. About 39% of the Corridor passes through Rajasthan. A band of 150 km (Influence region) has been chosen on both sides of the Freight Corridor to be developed as the Delhi-Mumbai Industrial Corridor (DMIC).

Under DMIC, the following 5 nodes have been identified in the State of Rajasthan:

Out of these, in the first phase, the Khushkheda-Bhiwadi-Neemrana Investment Region (KBNIR) and the Jodhpur-Pali-Marwar Industrial Area (JPMIA) are being developed.

Under the project, in the first phase, the Khushkheda-Bhiwadi-Neemrana Investment Region, having an area of about 165 sq.kms and encompassing 42 villages of Alwar district, is being developed.

A Regional Development Authority (RDA) would be constituted to develop, manage and regulate each Special Investment Region (SIR).

Road Link for Neemrana to Bhiwadi measuring about 50 kms. This road link project is being looked after by the Urban Development & Housing Department (UDH), Government of Rajasthan. It has been informed by UDH that DPR of this Road Link Project was prepared by RIDCOR through its consultants M/s UPHAM International Corporation, Ghaziabad. It has been further informed that the land acquisition proceedings for the said project under the LA Act, 1894 lapsed on 31December, 2015. No further action has been taken by UDH.

It was informed by Delhi Mumbai Industrial Corridor Development Corporation (DMICDC), New Delhi that some of the road stretches which were proposed by DMICDC have been approved by the Ministry of Road Transport and Highways (MoRTH) and have been taken up for development on priority basis under the Bharatmala Project.

Under the said scheme, the Road Link project connecting Neemrana to Bhiwadi (Tentative length 50 kms), one of the Early Bird Projects of Khushera- Bhiwadi-Neemrana Investment Region under DMIC, has been taken up under Phase-1 by NHAI.

Aerotropolis Project proposed near Bhiwadi, Alwar: Ministry of Defence has issued NOC for this proposed airport project in February, 2015.

Ministry of Civil Aviation, Government of India has given site clearance for the said Airport in November 2015.

DMICDC, New Delhi is now in the process of getting Detailed Project Report (DPR) prepared through AAI.

The progress of development plans of the Khushkheda-Bhiwadi-Neemrana Investment Region is as under:

The detailed Development Plan for Khushkheda-Bhiwadi-Neemrana Investment Region has been prepared and finalized. The Master Plan of the area has been notified on 22 May, 2013.

In order to develop Khushkheda- Bhiwadi-Neemrana Investment Region as a ‘Smart City’, the ICT Master Plan for this region has been prepared and finalised with the help of M/s Cisco Systems, Bangalore in July, 2014.

The Ministry of Environment & Forest has in October, 2014 accorded environment clearance for the Khushkheda-Bhiwadi-Neemrana Investment Region.

For the first phase of Khuskeda-Bhiwadi- Neemrana Investment Region (KBNIR), 532.30 ha. land of five villages namely Palawa, Beerod, Mirzapur, Lamachpur and Manka is being acquired. Award for the same has already been declared. In addition to this, a strip of land required for the approach road (60 Metre wide) from NH-8 to the finally acquired land is also being acquired. A provision of Rs. 468.64 Cr. has been made in FY 2018-19 for disbursement of compensation. Disbursement of compensation to PAPs has already started.

Jodhpur-Pali-Marwar Industrial Area is being developed as the second node under DMIC. After detailed studies, an area close to 154 sq. kms, encompassing nine villages of Pali district has been delineated and notified for development. The Master Plan for JPMIA has been notified on 02 November, 2016 under Rajasthan Urban Improvement Act, 1959. The Ministry of Environment & Forest has in July, 2017 accorded environment clearance for the JPMIA. Early Bird Projects identified for Jodhpur-Pali- Marwar Industrial Area: 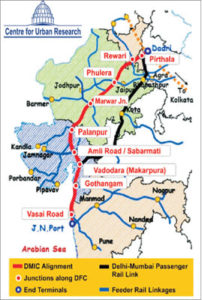 Strengthening of Road network: Development of Pali-Sojat Bypass from NH 65 to NH-14

Development of the Airport: Existing civil airport of Jodhpur to be expanded

The main provisions of this Act are as under:

The State Government may, by notification, declare any area (areas) as Special Investment Region (SIR).

A Board would be constituted which will act as an Apex Body.

A Regional Development Authority (RDA) would be constituted to develop, manage and regulate each SIR. The RDA would be responsible for preparing Master Plan, Zonal Plan and development schemes of SIR. The constitution of a single development authority for an SIR will ensure its planned and systematic development.

The infrastructure projects may be undertaken and implemented through Public Private Partnership.