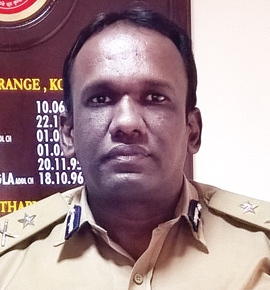 Reputed as a no-nonsense police officer, Manoj Abraham, Inspector General of Police (Trivandrum Range), Kerala, in a conversation with Vishwas Dass and Arpit Gupta of Elets News Network (ENN), shares how well the Kerala Police is equipped with technology to prevent traditional as well as cyber crimes

What kind of IT initiatives have been undertaken by Kerala Police to enable people avail police- related online services?

Kerala police is at the forefront of bring- ing ICT to the doorsteps of the people. It’s one of the most IT-developed states in the country so we also thought that we need to implement ICT to deliver our services to citizens in an efficient manner. Basically, in every field of police activity, we have been implementing key ICT initiatives. Almost all our official work is computerised. For example, the entire police machinery system works on a system called iAps which is digitalised. All our communications between police stations and officers, go through the digital media so there is no file as such. If somebody gives an application, let’s say of arms licence or verification, it travels very fast without wasting the applicant’s time. So, the verification process has become much faster. Large chunks of the Malayalis are settled in the Gulf countries who often encounter problems associated with land here in Kerala. Often, they get worried over such petty issues while working abroad. Hence, in order to resolve these type of situations, we have set up a special cell to tackle grievances of the NRIs.

How is Kerala Police exploiting IT to issue NOCs to people to get their passports swiftly?

Passport verification process has been one of the major issues in the recent past. We need to rapidly issue clearances to people effectively, to enable them getting their passports quickly. Our online police verification process for passports is very fast for the convenience of applicants. Per- haps, it is best in India. The moment we get the applications, the digital form goes to the sub inspector and it gets verified by him and sent to the regional passport offices (RPOs) without wasting any time. Earlier, the passport verification used to take 45-60 days which has been reduced to 15-20 days now, which is a commend- able job. As for the NOC clearance pro- cess people with bonafide documents are not facing any difficulty in getting their passports.

Apart from this, we have undertaken a lot of initiatives in the traffic. Throughout the state, we have the Dial 100 traffic control rooms which are ICT enabled, where all the police vehicles are GPS manned. We know where the calls are coming from and can dis- patch the police personnel to handle any situation. There are 300 speed check cameras and speed radars installed on all the highways. The automatic cameras are being managed by Kerala State Electronics Development Cor- poration Limited (Keltron) on Built Operate and Transfer (BOT) mode and they issue challans and share revenue with us. Similarly, we have red line jumping system, yellow line cutting system which automatically does the traffic enforcement. The traffic signalling system is also totally digitalised. We are also putting up a lot of software to manage traffic from control rooms. In order to help public to interact with the traffic police directly, lot of mobile apps are implemented where photos of accidents, complaints or any other misdeed can be uploaded for a prompt police action.

IT professionals associated with CyberDome are rendering their services free of cost, as they believe they owe a lot to the society. We have around 500 IT experts registered with us and around 30-40 companies working directly with Kerala Police

What kind of challenges Kerala Police is facing currently? What are your strategies to reduce crime in the State and enhance the level of technology?

With increasing penetration of Inter- net, the nature of crime is shifting from traditional crime to cyber crime. As an instance, earlier a person used to get inside a house to steal something, but it’s changing now as a person can commit a crime by sitting at a place through Inter- net. We are trained in tackling traditional crime but now cyber crime has changed everything. The new initiative called ‘CyberDome’ a public-private partnership centre- where a body of police officers, IT professionals and ethical hackers are helping us We involved all of them through online office. Along with the private sector, we have tied up with IT professionals who impart training to police personnel to keep them aware about latest innovations in the IT field. They also help us to investigate cyber crimes. Cyber crime is a thing which changes in every three months. Technology which is available now may become obsolete in the next six months. So, for that situation police personnel have to consistently update their knowledge about IT to understand the new innovations and technologies. We have to, at least remain at par with the criminals and that is what we are trying to achieve. Importantly, IT professionals associated with CyberDome are rendering their services free of cost as they believe they owe a lot to the society. We have around 500 IT experts registered with us and around 30-40 companies working directly with Kerala police. If we need some new software, these professionals help us to develop one with us and are allowed to sell it to other people.

Do you have sufficient manpower to tackle cyber crimes? Kindly share your future plans with us.

As of now, we have got around 15-20 persons in CyberDome. It’s actually more public-intensive and we have roughly around 500 persons who resolve our cyber crime related cases. We are consistently imparting training on our police personnel to keep them abreast about technological advancements. We require support of the people as well to prevent crime in the society.