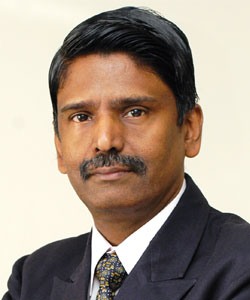 KPM Das is an author, speaker and contributor in areas of Information and Net-Centric Warfare and Command and Control Systems. KPM is a keen follower of Wargame theory and models. He is a former member of the MOD Core Group on Information Security and the co-author of the Defence Information Infrastructure proposal. KPM drives national security and defence strategy for India at Cisco. In an email interview with eGov, he sheds light on various ways ICT is being deployed in the defence sector

How can cutting edge technology in defence lead to attainment of battle objectives with minimal loss of life?

Over the past two decades, warfare has undergone a paradigm shift. Attrition warfare has given way to manoeuvre warfare in which commanders have objectives to be secured in limited time-frames. Also called Effect-Based-Operations, modern warfare is conducted with precision and focuses on disabling enemy infrastructure and vital areas/points. Modern warfare invariably requires networks which are failsafe and support both speed and throughput. With near-zero tolerance on casualties, both own and hostile, outcomes have to be measured and delimited. In scenarios such as these, solutions and technologies have to be based on flexibility, security and high degrees of redundancy- Cisco networks and technologies provide the kind of assurance that an operation of this nature demands and we are working hard to push the envelope to the needs of modern warfare.

Leading military organizations are moving away from traditional centralized thinking and planning, and towards an edge-centred approach to information sharing and availability. An intelligent network provides the foundational elements, such as collaborative tools, storage, security, messaging, and mediation, creating a common platform that supports the full array of services and applications used by military forces. These services can be used across service or agency boundaries—transparently to the user. An intelligent network is also central to an environment where commanders and staff can pull the information they require, without relying on a top-down, “push” approach to intelligence and decision making. This ability to “reach back” also reduces the forward footprint necessary for military operations, dramatically reducing costs and risks to personnel.

In a world where boundaries between voice, data and video are becoming increasingly blurred, how can defence ensure that access to “networked services on the move” continues to grow much further forward in the area of actual operations?

Convergence is here and now – networks carry voice, video and data with equal assurance. Combat signalers design, and build tactical networks to enable mobility – the network components are on the move, so are the platforms like battle tanks and ICVs and so are the soldiers with tablets and hand-held devices. This three-fold challenge is met by engineering architectures based on IP and use of protocols which are hardened for the battlefield conditions of impairment and disruption. Corps of Signals, around the world, has to be a step ahead of the general staff and commanders in ensuring that paradigms stay current and enable tactical-doctrinal shifts.

What are the latest technologies that can be used to manage the digital identities of people in Defence establishments?

Over military networks, both in peace and war, digital identities are used online as a way to identify personnel and to provide access to various services and military applications offered by the defence agencies. While many aspects of the online eco-system have been improved through IT Policy, Information Assurance  SOPs(Standard Operating Procedures) and innovations in technology, assurances of digital identity and managing those identities over the network with credence to privacy, security and ease of use remains a complex problem.

Identity management within a secure cloud of air-gapped networks require a complex set of technologies to manage authentication, authorization and access control (AAA) across distributed systems. These systems can straddle multiple security domains, as when two military formations or fleets collaborate, and enable cross-domain access to commanders and staff from the peer domain.

Cisco TrustSec Identity, a part of the Cisco Trust and Identity Management Solution, is the foundation for providing access control to networks. It offers authentication, access control, and user policies to secure network resources and connectivity while enabling military system administrators to grant customized access to the network, based on the identity of a user or device, and the SOP. This solution improves the network’s ability to identify, prevent, and adapt to threats. It also provides automated AAA services for switch-based network access and automates security policy enforcement and provides dynamic VLAN provisioning.

“Military needs have been the catalyst for technology disruptions and innovations”

What are the ways in which ICT can be effective in fulfilling the needs of military organisations in future?

ICT in defence force has two facets- the OIS (Operational Information Systems) for enablement of military operations and MIS (Management Information Systems) for running the administration and logistics of the respective organizations. While models for the former is largely derived from doctrines and battle work flows and therefore are highly customized and embedded, the MIS is not very different from those systems which are used in enterprises in the business and civilian domains. Considering the Size, Weight and Power constraints (SwaP), systems for OIS have to be necessarily match the profile of the military formation or HQ and will invariably need adaptation to mobile platforms to work alongside and support battle functions.

How can advances in military technology be put to benefit the society at large?

If you look at history of emergent technologies, military needs have been the catalyst for technology disruptions and innovations. However, over years, civilian, enterprise and consumer requirements have driven new products and solutions with dual-use possibilities. There are some areas, though, where military technology continues to provide leadership – the ones that come to mind are aviation and aerospace, satellite platforms, crypto-solutions and innovations in sensors and surveillance. Take the instance of a technology disruptive solution-Cisco’s IRIS (Internet Router In Space) which provides immense advantages to the Service Providers- allows organizations to reach multiple continents from a single connection to network infrastructure. The converged Cisco IRIS solution enables voice, data and video traffic over a single IP network to increase efficiency and flexibility compared to more fragmented satellite communication networks.

How are Cisco products being deployed in the defence vertical?

Cisco has been a leader in innovating and providing cutting edge solutions for defence forces around the world. A look at two of the most intense military engagements of recent times will reveal that WIN-T and FALCON networks, both of which are based on Cisco technologies, support US and NATO combat, which support echelons in Iraq and Afghanistan.

At a time when command and control has moved on from voice to voice-and-video, with commanders requiring enhanced level of collaboration in Command Posts, Cisco TelePresence solutions are extensively used the world over by the defence forces. A number of other technologies and products are also being used by defence forces worldwide.

In India, strategic and tactical networks have been deployed by the armed forces. They have moved away from second generation ATM and MSS based networks to IP-based architectures with significant focus on tactical routers and switches.

Most of the tactical communication systems and command and control networks around the world are powered by Cisco and we are working with military leadership to share the knowledge and experiences gained from such operational deployments. We are conscious of the fact that the Army, Navy and the Air Force have high expectations from technology providers in their transformational programs – these expectations include capabilities to adapt state-of-the-art technologies for the Indian defence market and meet the mandates of the Defence Procurement Policy in local manufacture and transfer of technology.

Following the success of the Cisco ASR 901 Router, the next generation mobile wireless router designed and developed out of India to address the needs of Carrier Ethernet, TDM backhaul and Cell Site Gateway, we intend to work with Indian partners and DRDO to provide secure “Made In India” solutions and products for  ships, aircraft and army combat elements.