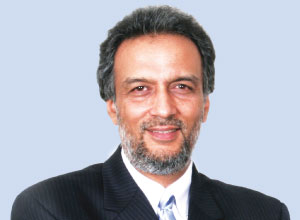 eGov Editor-in-Chief Dr Ravi Gupta and NIIT Technologies CEO Arvind Thakur engage in a conversation over NIIT’s current projects with governments and the reason why it has chosen to focus upon only a few verticals. Opportunities in the government sector as the pace of e-Governance in different Departments picks up is also discussed, and so are the company’s plans for expansion into a greater number of functional domains

NIIT Technologies has been pursuing government business very seriously for a while now. What are the latest developments on that front?

In Asia, and particularly in India, there is a very sharp focus on government. As a company,     we have been very sharply focused globally on the few industry segments. Government is an activity we do only in Asia. We have pretty good brand salience in the domestic market as far as engaging with the government is concerned. Essentially there are three areas where we are focusing on; first is defence, second is police and the third is power. Each of these three large segments has a significant outlay for investments in technology. We have been working with the Ministry of Home Affairs, Central Police Organisations like CRPF and very recently we have completed a project with the Border Security Force – the Intranet Prahari Project. It is a very large programme, connecting 250 remote border locations and getting people from the force to use the technology, training over 20,000 people.

Of late, we have also been involved with the CCTNS Programme. This is largely funded centrally and has to be implemented in every state. We are now working with the states of Tamil Nadu and Jharkhand and are in talks with a number of others.

In the power sector there is APDRP Programme. Our engagement is in the specialized area of GIS. The government programmes are large, complex, challenging, and we have been able to build ourselves in these areas. Hopefully we will see our business grow with the same pace. There are peaks and troughs in doing businesses with the government; our government  business has varied between 4-10 percent.

You have a huge expertise in GIS, which is largely a governmentoriented domain. How do you plan to leverage this experience?

The genesis of our engagement with the government is through the GIS programmes. The private sector also has phenomenal implementation of the GIS in the areas like telecom,  utilities, and in the areas that require large asset management. The government is very  serious in this sector and is putting together the National GIS Programme, almost at the same  magnitude as UID. If the UID Programme is an attempt to tag every individual, the National GIS Programme would be an attempt to tag every asset. These are very large programmes, and the GIS domain has the potential for exponential growth. Some of the areas we are expanding into, such as defence, police organisations, or power: these are led to large turnkey engagements which are normal system integrated engagements.

What kind of opportunity you see in states adopting the CCTNS, a very deep IT implementation?

If you look at the environment, with respect to law and enforcement, every police station is an island by itself. The only connection is through wireless and now mobile phones. So there is  only voice connectivity and no data connectivity. This is a great handicap for information  sharing. Policing is a basic citizen service and the government has a pretty significant outlay,  around Rs 2,000 crores, to get this whole thing going. Basically, the programme is  about creating a common application and customized implementation in different states. So  while we have a centralised application, the implementation has to be unique. We can go for  VSAT solution, and we can leverage whatever infrastructure required. Obviously it will take some time. Each one of these programmes would vary in terms of size. Tamil Nadu has about  1,500 police stations, Jharkhand has only about 500 – so implementation times and costs  would vary from state to state. Typically these programmes would have implementation  period of 18 to 40 months and then a running period of 3 to 5 years.

How are you looking to go deeper into areas like defence, power etc? How is the roadmap?

We don’t have any plans to have a federal practice In US or in Europe. We mainly deal with  the matters in Asia as a matter of fact. Dynamics of business vary from country to country.  We are strong in India, and in Asia, we are strong in Singapore and Australia because we have  done a lot of government business in these markets and there is a strong brand salience  and also they are big enough. One would not want to spread too thin and to move to other  markets when you have a strong brand salience. Our whole approach towards the business is  to remain very sharply focused so that we built specialization: on the technical part.

You have also done something in Singapore in e-Procurement. Are their plans for India as well?

e-Procurement is a good example that you cite. Singapore is perhaps the most advanced  government in the implementation of e-Governance. And besides the programme that we  have implemented with the Singapore government on e-Governance, there is a portal called  Gbiz and all government procurement happens through this portal. So this is what we have  built and we have  maintained. We have entered into a partnership with the Singapore government and we would now take this solution to other parts of the world.

“With respect to law and enforcement, every police station is an island by itself”

In India, we have implemented an e-procurement system for the Ordinance Factory Boards. Most of the government contracts are system integrated contracts. Its hardware, software, everything combined, we have done total integration of the implementation.

There are opportunities coming from multiple Government Departments. How do you plan to make use of these?

As I said earlier, you have to build upon your own track record, you have to choose your own battles. So when you are looking at the large government bids, you are competing with the largest players in the industry. Each of these bids consumes a lot of energy of the organisation  and you need to have a reasonable chance of success, like around 70% probability of winning  the deal to participate. You cannot expand just like that; you cannot spread yourselves too thin.

The skills sets required to engage with the government and execute government programmes are very different from the skills sets required to execute international programmes. Fundamental difference lies in the programme management because the maturity and  discipline in government organisations to implement large programmes is much lower simply  because the customer per se does not understand their responsibility in implementing  the programme. When you are implementing IT projects not only internationally but also in  the corporate world, the customers understand that they are the equal partners in the  implementation process. With the government, the responsibility entirely lies with the  vendor. I think this attitude is a major reason behind delays in large programmes. Departments need to take ownership of projects, and shed the attitude that the project  responsibility entirely lies with the vendor.

When the economic environment is tough, only the government can continue spending. Per capita IT spending by the government is around $ 1.5 in India and in Australia or US, it is around $ 100. So we are at the base of the whole curve. The comparison is unfair because the  size of the population is dramatically different. The good thing is that the government has  recognised an agenda for inclusive growth. So from that point of view, they have initiated  many policy changes as well and are creating the infrastructure to be able to use the technology for all its programmes. I think that is very useful. For example a huge programme  like NREGA can be very successfully supported by the UID programme. Besides  this there are many other programmes also. So this is the investment in infrastructure to  support that. Reaching out for basic healthcare, village do not have a medical facility.  Envisaging a situation where doctor in the city using technology can consult and can give basic medicine at least is phenomenal. Likewise we talked about public distribution, education and law and enforcement, these are all basic programmes where we are talking about  inclusive growth using technology. Though very small percentage right now but as citizens  start getting benefits, you would definitely be able to increase the outlay for technology.