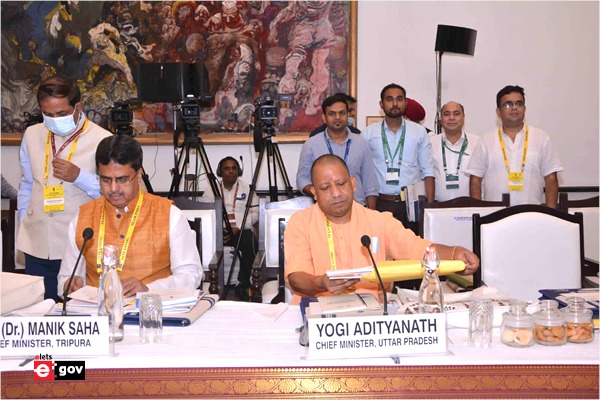 Uttar Pradesh Chief Minister Yogi Adityanath reiterated his resolve to make the state a $1 trillion (Rs 80 lakh crore) economy in the next five years at the seventh meeting of NITI Aayog, held under the chairmanship of Prime Minister Narendra Modi on Sunday.

CM Yogi not only enumerated the development works carried out by his government in the state of UP in the last five years, but also presented the outline of his plans for the future of Uttar Pradesh.

He said that the state government is working in a planned manner to achieve this challenging goal, adding that the focus is also on making the state’s infrastructure world-class and strong. Good and effective governance, skill development, rapid decision making process and targeted policies and rules are proving useful in this direction, he said.

Speaking specifically on his government’s plans for farmers, CM Yogi said that work is underway to strengthen the digital agricultural framework to ensure that the benefits of the government’s schemes reach the farmers of the state.

He further pointed out that as many as three crore farmers are registered under the Digitised Farmers Database in Uttar Pradesh, who have received Rs 3.5L crore in the last five years under various schemes. Uttar Pradesh is the leading state in the country in terms of distribution of grants through DBT by developing a digitised database for farmers, CM said.

Yogi said that ‘Centres of Excellence’ have been established in the state for specific agricultural products. The government has also started extensive preparations to celebrate ‘International Year of Millets’ by the United Nations in the year 2023. Besides, intercropping with jowar, bajra and sugarcane is being promoted to enhance income of farmers.

Yogi remarked: “To make Uttar Pradesh a Rs 80 lakh crore (one trillion dollar) economy by 2025, our cities will have to come forward as a growth engine by attracting investments and increasing employment generation. Urban development has to be a growth engine as well as address the challenges of housing/slum, water supply and solid waste management, air quality/pollution, livelihood and public transport. Uttar Pradesh is doing effective work in the field of municipal finance, town planning and administrative structure and citizen-centred administration, as suggested in the field of urban development at the national conference.”

Yogi added further that the work of GIS survey in 16 municipal corporations is in progress to improve the financial condition of the municipal bodies, due to which doubling of house tax is possible by the end of this financial year. Work is also underway to rationalise different types of user charges.

CM said that municipal bonds worth Rs 200 crore have been issued in Lucknow and Rs 150 crore in Ghaziabad. This amount is being used for the construction of residential complexes and STP, which will also generate revenue in future. The goal is to have partnership with international finance agencies and the formation of Urban Infrastructure Development Finance Corporation, which will also generate employment and encourage investment in small local bodies.

The UP CM said that the National Education Policy-2020 is the biggest campaign for comprehensive reforms in the field of education after independence. This policy is the vision of the Prime Minister. The National Education Policy lays emphasis on improving the talents of children and making them efficient and confident. Special efforts have been made by the state government for the development of basic infrastructure facilities in the schools.

He said that the government has started transfer of Rs 1200 each, in the bank accounts of parents of 1.91 crore students studying in classes 1 to 8, in council schools for the purchase of uniforms, sweaters, schoolbags, shoes and socks, and stationery.

Yogi added that 5,000 model schools are being developed in the state under ‘Operation Kayakalp Phase-II’. Besides setting up of 2500 smart classes in government secondary schools, e-mails of one crore secondary students have been developed and WiFi facility has been made available in 2,273 schools.

With the implementation of this scheme, youth will get a special opportunity to participate in policy making, management and implementation etc, while the blocks will benefit from the new, innovative approaches of the youth.