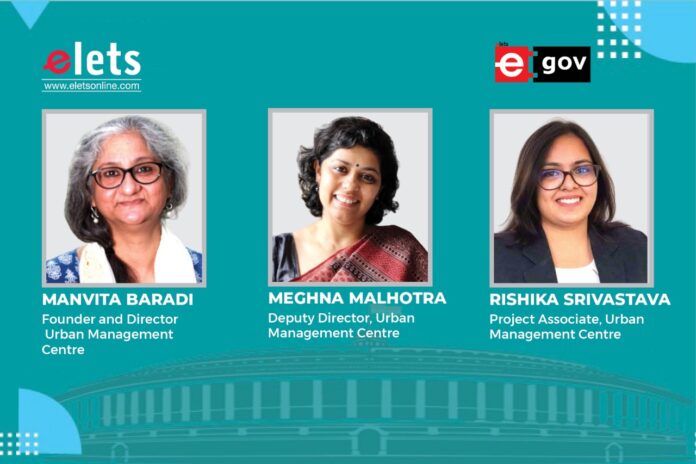 Most of us have in our lives read the news that a sanitation worker died while cleaning a maintenance hole. Why, in 2022, do we still read about sanitation workers’ deaths and what are we doing as a society to prevent this? Furthermore, heavy precipitation and flood events can lead to physical damage of non-sewered sanitation infrastructure, especially pit latrines and septic systems, making them non-functional when filled with water, especially in densely populated urban areas and informal settlements.

Sanitation workers in India have faced caste-based discrimination, occupational stigma, loss of health and life, and invisibility within the system. These workers don’t have access to safe and comfortable personal protective devices. Though this work should be considered admirable and these workers should be celebrated, the reality is starkly opposite. They lack access to basic human rights and dignity, and their efforts remain largely unacknowledged. Most of the sanitation work undertaken is intergenerational. The first step to right this generational injustice is to identify sanitation workers, and enumerate them to ensure occupational, social, and financial safety.

The Government of Odisha has become the pioneer in the country for ensuring occupational, social, and financial safety for core sanitation workers.¹ With the Urban Management Centre as their implementation partner, Government of Odisha launched the GARIMA scheme to enable safe and dignified livelihoods for sanitation workers. Even more significantly, hazardous sanitation activities such as sewer line cleaning and septic tank emptying have been recognised as highly skilled, while less hazardous activities like drain cleaning, maintenance of wastewater treatment plant and community & public toilet cleaning have been recognised as skilled. This required to change the list of Scheduled Employments of the state and work with the Labour and Employees’ State Insurance Department of the Government of Odisha, in accordance with the Minimum Wages Act, 1948. On July 5, 2021, sanitation work was included in the list as a separate item. 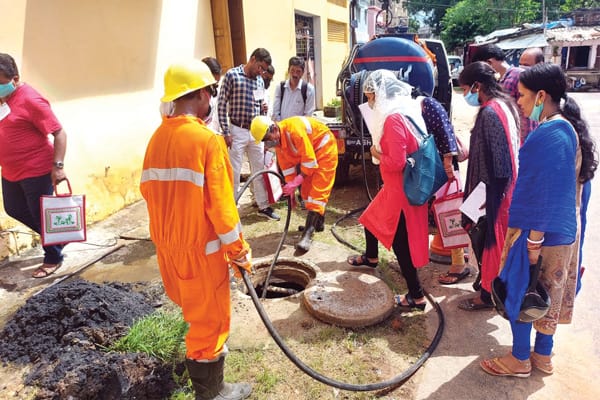 This also makes Odisha the first state in India to acknowledge that the work being done by sanitation workers is highly skilled.

Sanitation work, by its very nature, is complex. Septic tank cleaners, and sewer line cleaners often have to enter into confined spaces with low visibility and lack of oxygen to identify and correct damage to critical infrastructure or clean the sludge that has been depositing for years, sometimes as long as 15-20 years. The skills and knowledge a sanitation worker needs are highly specialised, even without considering the tremendous hazards they experience while performing their task. There is a constant risk of contact with faeces and contaminants, risk of falling or drowning, and inhaling hazardous gases that build up in pipes and tanks. In almost all other industries, such severe threat to life and limb are recognised and compensated and provided with appropriate benefits and covers. The Urban Management Centre (UMC) conducted an analysis of Scheduled Employments of various states in India from the perspective of sanitation work. In states that sanitation workers are recognised as labourers, they are often referred to as sweepers, cleaners, or even ‘scavengers’; a word that is associated with a deep-rooted stigma involving sanitation work.

Despite these risks in the sanitation work, none of the states in India have recognised it as a skilled profession relegating the workers to receiving minimum wage with no focus on their training.² Sanitation workers often do not receive any support or additional allowances for insurance, healthcare, and counselling, nor do they receive hazard allowances for the high risks they take.³

In some cases, permanent employees of urban local bodies or parastatal organisations are paid higher wages, contributing to a belief that this change in the wage codes is redundant. However, the majority of sanitation workers in India are employed by private contractors or completely informally. In this situation, these workers still need protection via higher minimum wages and mandatory employment benefits like insurance and health care coverage.

The customary caste hierarchy relegated sanitation workers to the lowest rung of the social ladder. In the modern era, this has led to sanitation workers lacking the resources necessary to gain skills and access other occupations. Many social reform movements have attempted to help families break out from the cycle of exploitation; however, progress has been slow and spasmodic. Over the years, the approach has been rooted in the mindset of punitive action against employers of sanitation workers and targeting families for rehabilitation, based on their caste identities. Even though the Prohibition of Employment as Manual Scavengers and their Rehabilitation Act, 2013, has widened the limited view of what constitutes manual scavenging from its predecessor, there is still a huge gap in its interpretation. Employers lack recognition for the necessity of trained sanitation workers to maintain urban infrastructure. Consequently, we have not been able to address the socio-technical factors that incentivise unsafe sanitation work in cities. In the last 20 years, there has been significant investments in urban infrastructure to improve the overall efficiency and maintenance of the systems. However, the people-centric approach and infrastructure-centric approach have not come together as a comprehensive strategy to make the work itself safer. The GARIMA scheme covers all workers in the state that perform job roles with a potential for direct contact with faecal matter. Before being recognised as skilled and highly skilled workers, they were entitled to a minimum wage of Rs 303/ day as unskilled labourers. After the amendment, they are now earning Rs 458/ day as highly skilled labourers. Overall, this change in the employment categorisation is expected to increase the wages of sanitation workers by around 50 per cent.

The Housing and Urban Development Department (H&UDD), Odisha played a huge role in making this happen. Urban local bodies and their subcontractors collectively are among the largest employers of sanitation workers. The H&UDD recognised that the interventions made under GARIMA would be incomplete without the introduction of this wage category. Urban Management Centre (UMC) supported the state government by analysing the precedents that exist in other hazardous industries such as mining, construction, and providing advocacy support. UMC is now working with H&UDD to set up an institutional structure to ensure that these workers are trained and certified to perform such hazardous jobs.

While sanitation is mostly done by state urban development departments; the mandate of modifying the Scheduled Employments rests with the state labour departments; the two departments need to converge to ensure inclusion of sanitation work in the schedule of employment. The modification of the Scheduled Employments’ list is a state subject, and the process to make these changes is slow; but Odisha has shown that it can be done! 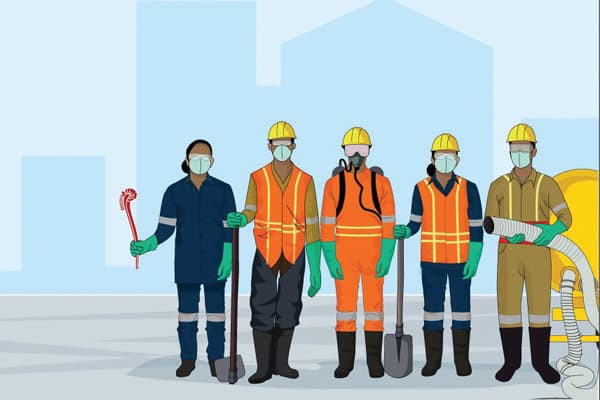 The design and implementation of a comprehensive strategy for safety and dignity of sanitation workers, the Government of Odisha has set a precedent for the country. In the last two years, over 19,000 sanitation workers have been surveyed. In the 5 pilot cities, validated sanitation workers have been given Garima ID cards. Over 3000 core sanitation workers (CSW) have been linked with various entitlements like Biju Swasthya Kalyan Yojna, Aadhar card. CSWs are also getting training and certification through Odisha Water Academy. The government undertook institutional restructuring for setting up and strengthening of Emergency Response Sanitation Units (ERSUs) and a massive drive to procure and distribute Personal Protective Equipment (PPEs). To ensure CSWs have access to PPE washing-cum- drying area, drinking water facility, changing room, resting area, washroom, and a locker room, 31 Garima Griha have been constructed in 5 cities of Odisha as a pilot. It will be scaled up in all towns, so that all the individuals involved in hazardous work can clean after duty and go home to lead a dignified life.

The steps taken by the Government of Odisha are centered on the idea of visibilising sanitation workers to end the vicious cycle of caste-based discrimination, occupational stigma, loss of health and life.