The State of Uttar Pradesh holds immense potential in the export sector, especially with area-specific popular products like chikenkari from Lucknow, leather products from Kanpur, locks from Aligarh, and more. To handhold exporters and help them expand to new markets, the Ubharte Sitaare scheme was launched. Elaborating on the scheme and unveiling the potential of the state in exports, Rahul Mazumdar, Assistant General Manager, India Exim Bank addressed the Ubharte Sitaare of Uttar Pradesh Conference.

Rahul Mazumdar emphasised three major aspects through his presentation – macroeconomic scenario in Uttar Pradesh, growth of exports in the state in the past 10 years, and which sectors hold the most potential for growth in exports.

“The Gross State Domestic Product (GSDP) of Uttar Pradesh has touched $17 trillion, but in terms of per capita income, Uttar Pradesh is slightly behind when compared with the overall per capita income growth of the country. However, I’m of the view that with the state government policies, positive growth can be seen in times to come,” he added.

Any sector is based on three major domains – Agriculture, Industries, and Services. Uttar Pradesh is an agrarian economy and holds tremendous potential for growth in the sector. Besides, the industries in the state have grown from 27 percent to 29 percent and is a domain that can open doors to greater economic growth for Uttar Pradesh, especially after the success of the ‘One District One Product’ (ODOP) scheme of the state government. During the presentation, Mazumdar said, “If we look at the merchandise and exports of Uttar Pradesh, we see that not much growth has been achieved. However, despite the slow growth, Uttar Pradesh is the fifth largest exporter in India. This is evident enough to show the immense potential that the state holds in the exports sector.” 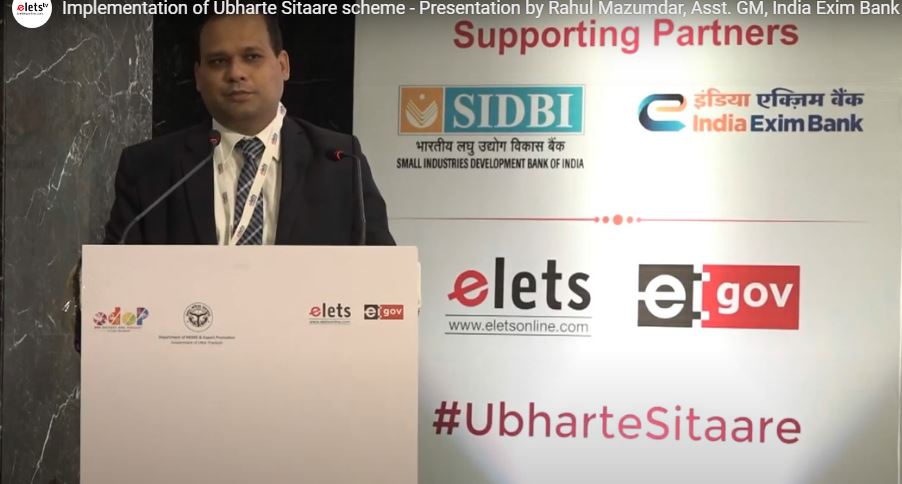 He cited a quote from the address of MSME and Export Promotion Minister of Uttar Pradesh Siddhart Nath Singh, saying, “the Minister rightly said that many products that are manufactured and produced in Uttar Pradesh are exported from Delhi and hence the national capital takes the credit. This is one of the reasons why exports show a slow rise and dips at points. Also, the landlocked geography of the state adds on to the scenario.”

Mazumdar pointed out that “as per our study, there is a potential of $12 billion in the exports sector of Uttar Pradesh which if tapped will take the exports of the state from $16 billion to $28 billion.”

“As per our study, there is a potential of $12 billion in the exports sector of Uttar Pradesh which if tapped will take the exports of the state from $16 billion to $28 billion.”

Discussing solutions to improve the exports in the state of UP, Mazumdar said, “The exporters must stay updated and aware of the various free-trade agreements that India has signed with the other countries. Also, government authorities and export promotion councils should spread awareness among exporters about the schemes, policies and trade agreements.” He added that Uttar Pradesh has the potential to be a hi-tech manufacturing (manufacturing electronic items) hub and for that being landlocked is no disadvantage. Supporting his point, he cited the example of Chengdu city in China which is a landlocked region but is one of the major centres for China’s hi-tech production.

“The exporters must stay updated and aware of the various free-trade agreements that India has signed with the other countries.”

He said, “The Government of Uttar Pradesh needs to build cold storages to ensure that the agro produce does not get spoiled. Such a facility can pose a great help to the exporters of agricultural products.” Exporters should focus on tapping into newer markets overseas and need to understand the demands of those markets for successfully expanding their businesses, he added.

Naming a few potential sectors as per the market trends, Mazumdar said, “Electric Vehicle is among the focussed areas. If Uttar Pradesh starts manufacturing EVs before other states it will get the first-move advantage. Most states are offering incentives on the line of 50 percent for the manufacturing of EVs while Uttar Pradesh is offering only 25 percent. So increasing that would help. UP is the largest sugar producer after Maharashtra so the state can also come up with Ethanol production. Solar power is another sector where components can be manufactured, most of which are presently being imported from China. Also, Uttar Pradesh should focus on enhancing tourism in the state to boost economic growth.”

Under the ODOP scheme, many products have been GI tagged. This has been really helpful to enhance exports as the tags mark the authenticity of the product’s manufacturing and ensure the customers of its quality.